My 2015 triathlon season fizzled to a close when my last planned race (Waterman’s Sprint in Rock Hall, MD) was canceled because of Hurricane Jocaquin, and while that left me a little disappointed for a few days (read: I spent the 24 hours after the cancellation announcement in my pajamas and pouting), there are plenty of other ways to swim, bike, and run that don’t involve an actual triathlon race.

To deal with the immediate disappointment over the missed triathlon, I signed up for a swim meet that was taking place a mile from where I live, and while I’ll write up that experience at some point, today, I’m writing about the first running race I’ve done in six months. I guess I really did go quite triathlon heavy this year if I didn’t even manage a 5k or 10k between early May and November.

Since nationals, my run training has been so-so – between a lack of motivation to do ANYTHING fast for a solid month and a half after crossing that finish line, and knowing that Jason and I would have a lot to do with an upcoming condo purchase and renovation and, oh yeah, getting married, I decided to skip my normal fall half marathon plans. Instead, I went with training for the 5k and 10k distances, and planned to jump into local races when my schedule and (relative) fitness allowed. So, with that in mind, I went with The Parks 10k last Sunday. I could bike to the start line, the course is flat and fast, and I’d be done well before 9 am, leaving the rest of the day open for dealing with mortgage and renovation efforts. 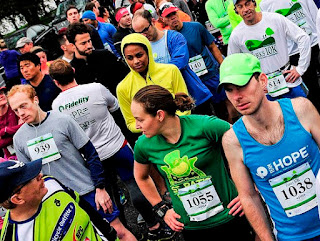 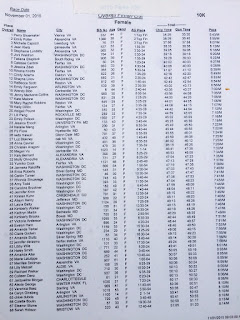 Not too bad of a ranking for somebody whose run is the weakest point in their triathlon bag of tricks. Mile by mile:

Mile 1: 7:29 - As usual, I took the mile out too fast, since I’m used to starting a 10k already fatigued from a hard 40k bike, and my perceived exertion doesn’t hold me back enough in a standalone running race. 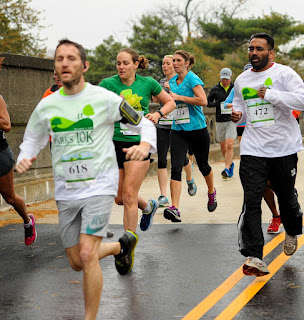 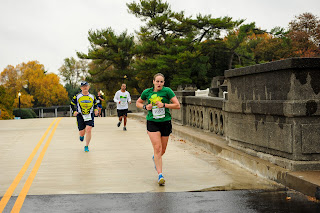 Mile 5: 7:56 – Feeling some lower back pain here – I had a cyst develop the week before the race, which can result in nearly blinding pain. It had mostly deflated by race day but gave me some grief about 2/3 of the way through the race.

Mile 6: 7:50 – From a distance, I mistook a large construction sign, positioned at mile 5.9, for the finish line. Hence the slight acceleration in this mile.

Last 0.2: 7:24/mi – Painful, but I was not letting sub 49 slip away so I went with everything I had left after the mile 6 sign, with that pesky cyst protesting the entire way.

Given that I spent a lot of time floundering after nationals, a renegade cyst, and a rough week of work travel leading up to the race, I’ll take the PR and relatively high ranking in the field. I still have some hopes that I can post a slightly faster time with a better lead up to race day, so stay tuned for more November races.