As I noted last week, I’ve been able to run again post-fracture, and it’s been fun. The weather has (generally) given us cooler temperatures ideal for running nearly any time of day, and I’ve been pleased to find that I didn’t lose too much running speed. After a couple weeks of gradually longer runs (only one over an hour, don’t get excited) with decreasing walk intervals, I floated the idea of racing a sprint triathlon to my coach, figuring I could handle a 5k run at this point in my post-injury recovery. It may not be fast, but I’d been swimming and biking enough that I could bank some time on the first couple of legs, and maybe squeak out a qualification for the 2015 Age Group National Championships so that I could get that out of the way.

While I expected coach to question the wisdom of competing in a race less than 4 weeks after my first 20 minute run-walk, she gave me the green light, so I signed up for Waterman’s Sprint over in Rock Hall, MD, and made the early morning drive over to Maryland’s eastern shore with no idea of what to expect.

Turns out it went pretty well, and I turned in 4th place overall, which is the highest overall placement I’ve ever achieved – and I would have been 2nd overall had I been able to put on my shoes (see T2 time and ranking).

The good news is that I still won my age group, which means that unless USA Triathlon drastically changes their qualifying standards, I’m in for 2015 Age Group Olympic Distance Nationals! 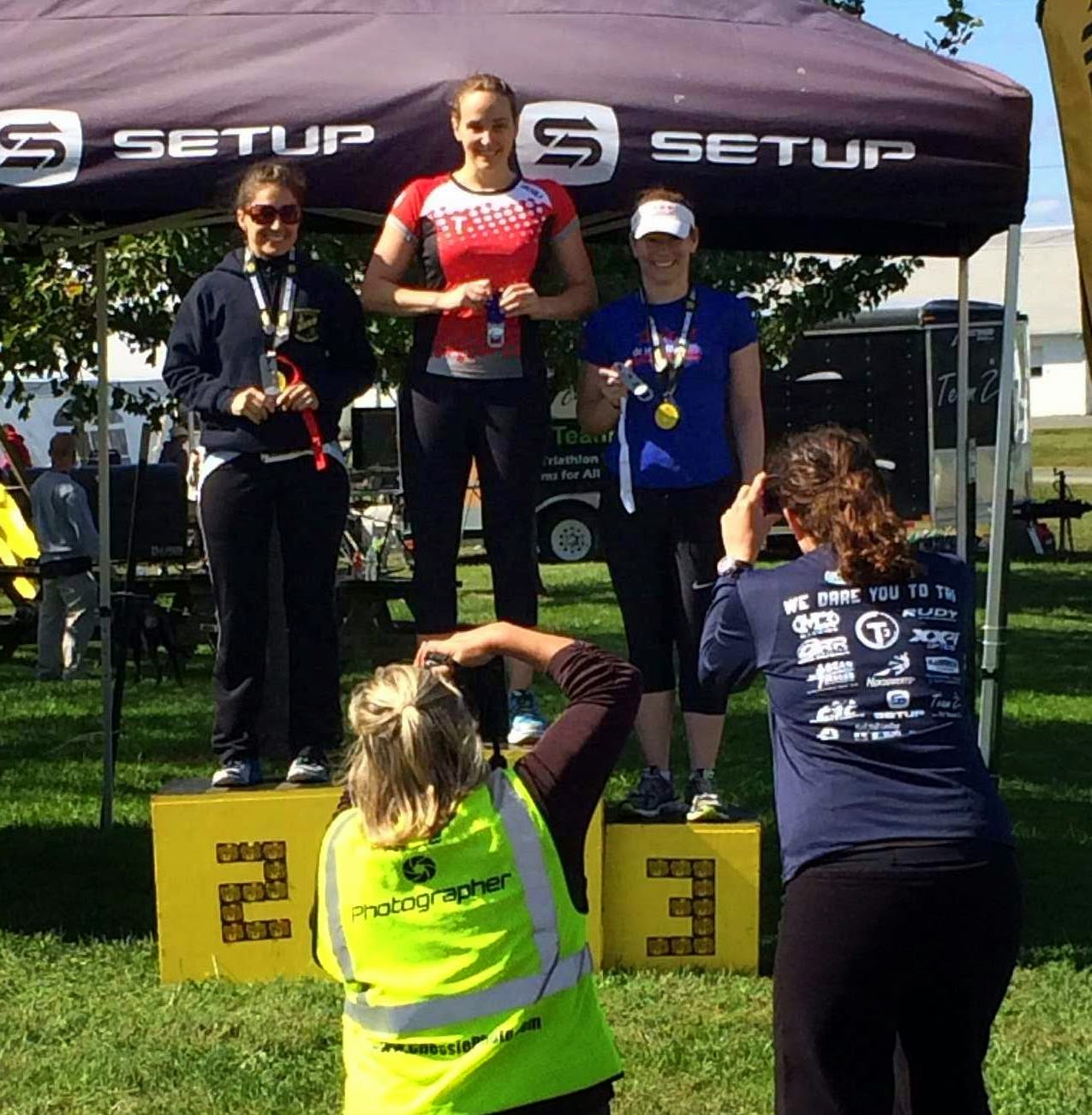 As for the details…

Despite the cold temperatures race morning, I still planned to get into the water to warm up for 10 minutes before the race. That is, I planned that, until it turns out we weren’t able to do so. Instead, we got about 3 minutes to bob around before our wave started, which turned out to be insufficient warm up (shocking, I know). I spent the first half of the swim very much not with it mentally, and was definitely not putting out a sprint-level effort. It was probably about 10k swim effort, if that. I picked it up a little bit for the 2nd half, and just barely came in under 12 minutes and soon heard somebody tell me that I was the 4th woman out of the water. Not ideal, but not catastrophic, so I put the swim behind me and moved on to the next task at hand.

I passed one of the women in front of me in transition. Then I probably wasted a few seconds at the mount line clipping into my shoes because who has time to practice flying mounts?

Though it was still chilly, I didn't bother with arm warmers or gloves, and reasoned that I could warm myself up by making more watts. This works for a sprint, when there isn’t as much concern about blowing out your legs as there might be for a longer race. I averaged 190-200W for most of the time I was pedaling, but bled off a little power going around turns and the like. While keeping me warm, that power output helped me handle the pretty substantial wind with ease, and also helped me pass one of the two women in front of me a few miles in. Given the wind, I was definitely glad to have my powermeter keeping my effort level even – you can see that my speed, which is in green, varied substantially despite the flat course, owing to the variable wind direction. My power output, however, stayed relatively even except when passing or taking turns.

I was also glad I had my powermeter because my heart rate monitor wasn’t functional thanks to the brackish water we had for the swim. No, I was not putting out almost 200 watts with a heart rate in the 60s, but I can dream, right?

Anyhow, at least one piece of technology held up throughout the bike, and I kept ahead of the rest of the women’s field to roll into T2 behind only one woman.

Since I’m still a little iffy about my foot, I was running in super supportive shoes (Hoka Bondis) without speedlaces. And I now know this is where I lost my overall podium spot. Sad trombone.

I set out onto the run course and focused on trying to hold threshold effort, or perhaps a little faster. My run legs came out pretty quickly, and I passed through mile 1 in 7:30, and figured I was either going to blow up and barely avoid walking while watching speedy female runners stream past me, or I was going to run faster than I have all season.

Of course, even running faster than I have all season, I could still get passed by a bunch of women. There were some speedy ladies out there, so I was bracing myself to see a stampede of them right behind me when I got to the turnaround.

And didn’t see anybody. Eventually I saw a dude, and a few more dudes, and finally saw a few women about three minutes behind me.

Essentially, it was my podium place to lose, so I kept running at a high effort level – definitely close to redlining the heart rate and periodically looking over my shoulder. Knowing that half the women started four minutes behind us, I didn’t let up despite the space behind me, and was definitely DONE when I crossed the finish line. I got a temporary boost from being announced as the second woman across the line (this may never happen again so don’t expect me to ever shut up about it), walked through the finish chute, and immediately laid down for a substantial chunk of time before going over to inspect the results.

Turns out that two women starting in that wave behind us were 8 seconds and 20 seconds faster than me, so all the glances over the shoulder in the world wouldn’t have told me that. I won’t lie, I was a little upset that I was SO CLOSE to being 2nd overall. But I really think I put everything I had out there that day. Sure, I could have been faster in transition, but it would have been at the risk of reinjuring my foot. And I could have swum a little faster, maybe put out a few more watts, what if, etc.

In the end, I didn’t. And even though I didn’t, I can’t be too upset about the results, because I’d just started run/walking 27 days before this race, finished 4th out of 154 women in the field, and actually set a 5k PR by almost 30 seconds despite having biked pretty hard for 40 minutes immediately beforehand.

I also can’t be that upset because the overall winners got tubs of HEED as a prize. Who needs that? I’ll take the bottle opener, thanks. 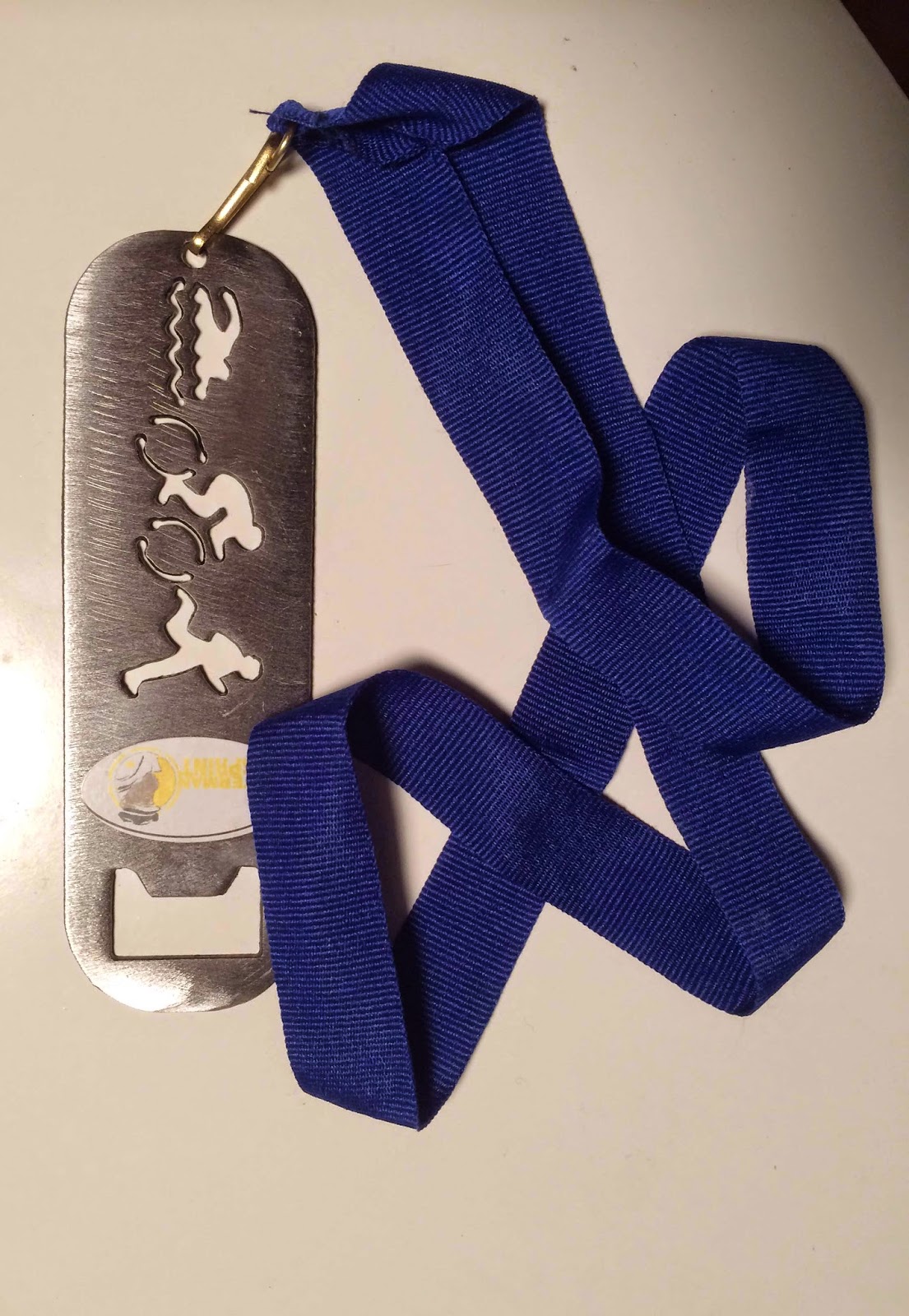 And that’s it for the 2014 triathlon season. It definitely didn’t turn out the way I thought it would, with a DNS in my first scheduled race, a broken foot, and some races I hadn’t even planned on doing. But it was a pretty good season regardless, and I know what I want to do with the 2015 season – and that’s a discussion for another day.