I’ll always remember this as the race where I first broke 2:40.

And also broke my foot (but you already knew that).

And also broke a spoke on my rear wheel (more about that later).

Since qualifying for the 2014 USA Triathlon Age Group Olympic Distance National Championships almost a year ago, I’ve been looking forward to the race. A lot. Sure, this race isn’t anywhere near as prestigious as Kona or 70.3 Worlds, but I still had to qualify, and was thrilled that I’d be able to compete in this race in my hometown. I figured I’d be coming in nearly last in my age group, but didn’t care because at least I was there.

The race absolutely delivered everything I was looking for. The venue was beautiful – right along the Milwaukee lakefront – and well organized. And the competition would be fierce, which would push me to race harder. Ideal conditions for the sub-2:40 PR I was after that day. 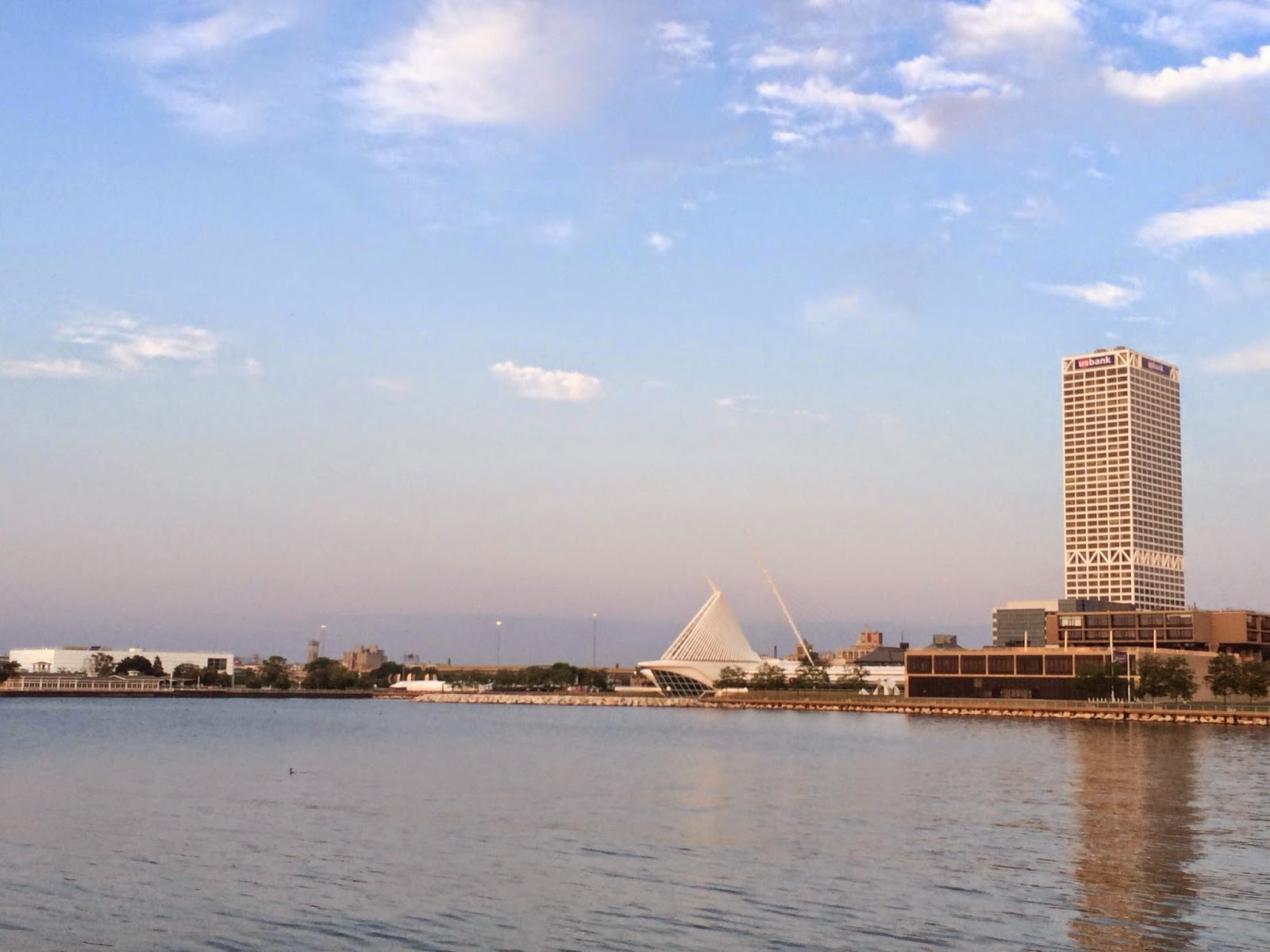 That fierce competition and I hopped into the water around 9:30 am; we all swam a few strokes in the water in the protected lagoon off Lake Michigan, and then lined up and waited for the start countdown. Literally 90 seconds before we were to start, the announcer informed us that there was going to be a delay. The wait wound up being about 15 minutes, and I used this time to find Carrie hanging out on the dock with the rest of her 20-24F wave. It was nice to finally meet her and chat about our watts a little bit, and it took my mind off the rising temperatures we’d be facing on the run later that day. Eventually, we were called back in and I lined up, ready to get this done.

I realized that when I hopped in the water with some of the fastest 30-34 year old women in the country, I wasn’t going to be one of the first out of the water, and about 10 seconds after we started, I also realized that this meant many of us would be about the same speed.

In other words, we’d all be competing for the exact same real estate on the swim course. There was a lot of contact the first third of the swim, and it was hard to sight the buoys with so much commotion around me, but everything finally broke up a bit and I was able to stay on course alright. My effort level may have been a little low, and while I think I’m very much capable of a 22-23 Olympic distance swim based on my times in the pool, I tend to have trouble focusing in open water, and wound up coming out in just over 24. Not great, not terrible, and either way, time to move on with the race.

Woah look at that low ranking. The run to and through transition was large, and I was running a little tentatively because of my foot. We’ll blame that.

I’ve really struggled to hold good power numbers at the Olympic distance, and usually wind up holding an average power that is more suitable for a 70.3. At this race, I did a little bit better, holding around 170W, which is maybe 5-10W lower than I should be holding at this distance given my FTP. I was pretty happy with this, and had the course been REALLY flat, I’d probably have been pushing over 21 mph. 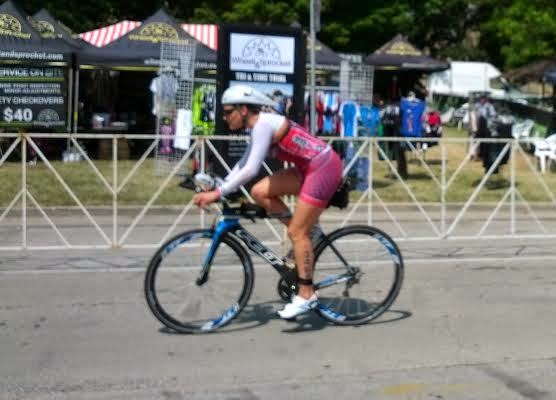 There were, however, a few non-negligible inclines that brought down my speed a little, as well as some WIND that made me angry. I started to get kind of negative around mile 15 thanks to the wind and some rough road conditions; then I shoved some candy corn in my mouth (I keep it in my bento box - it’s the same as a sugary sport chew, really), and was suddenly happy again. Candy corn, a closed bike course, and I was RACING AT NATIONALS, how could I not be happy?

Put on the lighter/less stable shoes I got 3 weeks ago (foreshadowing) and got out of there.

I felt GREAT for the first mile and turned it in under 8 minutes. YES! My taper had worked, backing off running last week had saved my foot, and maybe I could even get my reach goal of around 2:35.

I tried to ignore it. Tried to tell myself that “it was just pain” since two PTs had assured me it wasn’t a break. Tried to focus on running at a sustainably hard level like I do during track workouts.

But the pain got intense enough that I couldn’t override the automatic response to alter my stride to protect the foot – and whatever I did made it impossible to really get my heart rate up and push with my glutes to run as fast as I could. My average pace kept increasing, and sometime after mile 2, I contemplated a DNF.

I reasoned with myself that walking generally hurt more than running, and I’d just have to walk back to transition, so finishing the course would be the least painful option. I distracted myself by cheering for people I recognized on out and backs (Hi Corey and Carrie!) and eventually focusing on getting closer and closer to the art museum once we turned back around for the finish at about mile 4. In retrospect, I still don’t know how I did this, but I suppose being stubborn has its advantages occasionally. 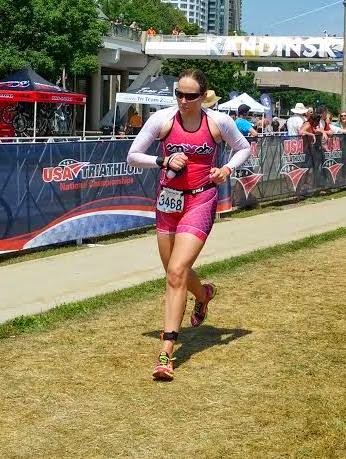 As much as the foot hurt while I was running, it hurt EVEN MORE after I finished. Stepping down to walk towards the finish exit was agonizing, so I grabbed some ice from medical and hobbled out to meet Jason and my family.

We looked up the results, found out that I’d finished in the middle of my age group - 90th out  of 169- and had set a new overall and run split PR, which made me laugh given the condition of my foot, and also made me a little angry because I was obviously in shape to go a few minutes faster. Still, I reminded myself that my stated goal was sub 2:40, and I went 2:39 flat. AND I had just raced in a national championship. This collection of awesomeness really wasn’t lost on me.

Since walking hurt so much, I rode my bike back to the hotel and started hearing a funny noise from the rear wheel a few blocks away. Upon inspection back in the room, I discovered a broken spoke. I believe that this happened AFTER the race, as I did not hear it at all during the race, but still, come on – do I really need this, too?

I was still debating whether or not I could survive the sprint the next day, but knew I wanted to at least have the opportunity available, so we hauled my bike back to technical support (staffed by Wheel and Sprocket, the bike shop I went to as a kid) where they fixed it for $15 in 10 minutes. Score.

As much as this race day was quite the experience, I still wasn’t done – I knew I wanted to at least swim and bike the next day, so it was time to rest up. More on how that turned out in a later post.