So. We left off with a painful foot, a recently-fixed bike, and a sprint national championship race looming the next day. What could go wrong?

As we got closer to race day, online discussions about Team USA slots kicked up, since Worlds 2015 is in Chicago. Out of curiosity, I looked up what I’d have had to go to finish in the top 25 the year before.

Or, 3 minutes slower than I’d been at Colonial Beach, which featured a 22k bike course rather than a 20k bike course like nationals would.

Realizing that the race would probably be more competitive this year thanks to the proximity of 2015 Worlds, I was still hopeful maybe I could sneak in. This was a late-breaking goal, not one I’d worked towards for months, but I still wanted to go after it, foot pain and all.

With that in mind, I spent Saturday after the Olympic distance championships icing my foot and downing more Advil in 16 hours than I had in the previous year total. No, this is not medically advisable, and yes, I know that. I was on a mission to finish another 3.1 miles of running and then deal with the foot issue 100% on Monday morning, recognizing that I might be spending 12 weeks in a cast as a result.

Look, technically I’m an adult, so I get to make these decisions for myself. At least, that’s what the law says.

I was in a later wave again for the sprint, as was Jason, so we got comfortable on a patch of grass while I kept poking at my foot to see how it was doing. More Advil was downed (yes I know), more sports drink went in, and finally, it was time to wander towards the water.

Since our wave was about half the size it had been for the Olympic distance race, it was much easier to sight and get clean water. I pulled HARD and felt like I did a good job of staying on course and staying focused. Came out of the water with 11:15 on my watch and volunteers yelling “YOU’RE 10th” as I made my way over to transition. Very happy with this swim.

More slow running with a painful foot. Passed Jason in transition, then heard Carrie yell “GO MAKE SOME WATTS” as I approached the mount line. Well, if she says so…

This race was taking place between the Milwaukee Art Museum and the Summerfest grounds. Summerfest? It’s an early-summer music festival that the entire city loves, and the same park holds ethnic-themed festivals, like GermanFest and IrishFest, later in the summer.

With the intent of putting out as much as possible on the bike because I wasn’t sure how well the run would go anyway, I came up with a name for this ride.

Any time I felt like backing off, coasting down a hill, or letting somebody go in front of me, I reminded myself that it was HAMMERFEST and you can’t go to HAMMERFEST if you aren’t going to HAMMER. It would be like going to GermanFest and not having any bratwurst, come on.

I got stuck behind a few people and probably should have put in the surge – aka HAMMER – to get past them, but I wasn’t sure I’d be able to make it in time and had a USAT official following me for a couple of miles. That’s probably about the only time I left out there, I put out about the same power I did at the Colonial Beach Sprint, and definitely HAMMERED up all the inclines. I would have liked to have been a minute or so faster, but was OK with how this turned out. 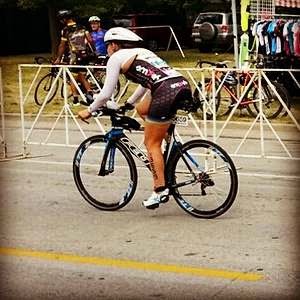 This hurt from the beginning. No question there. The pain came and went, and just like most of the run the day before, and just like the day before, I couldn’t overcome the automatic stride adjustment to avoid the pain. I essentially ran most of this on the inside of the arch of my foot, which is obviously not a strong or efficient way to run. In retrospect, I have absolutely no idea how I made it through this 5k, but I did, and wasn’t too far off my typical sprint triathlon run split.

The most disappointing part of the weekend is that my legs were barely sore Monday morning, and I know it’s because my foot limited how hard I could push on the run. My time in the sprint was about 2 minutes off a slot for 2015 worlds, and had my foot cooperated, I could have maybe been close to that. But it didn’t, so I sit around considering the possibility that a slot will roll down to me and, barring that, will come back next year to get one for the 2016 edition which will be “somewhere in Europe.”