Every year, the folks running the Richmond Marathon, Half Marathon, and 8k offer race-week discounts for the next year’s registration. Two days after running the 2011 edition of the marathon, I couldn’t resist the very low entry fee for 2012 and signed myself up to cover 26.2 miles of Richmond again. Then, a few weeks later, I signed up for Ironman Louisville, and left my registration for the Richmond Marathon sitting there, vowing to not commit to doing anything one way or another until after August 26. Once I crossed the finish line in Louisville, I decided that few things sounded less appealing than jumping into 14-20 mile training runs every Sunday for the entire fall. But a few 8-12 mile training runs in October and November? That could be fun.

After settling on the half marathon option, I was still a little apprehensive about racing. I saw a lot of miles that took over 11 minutes this summer – for that matter, on hot days after long bikes, I saw more than a few 12 minute miles. I’d already met my sub-2 hour goal for the year in March, and wasn’t interested in “racing” a half marathon 10+ minutes slower than my PR. But soon, the summer heat broke, my legs recovered from the biking overload of the summer, and my paces improved with every passing week. My long run paces dipped back into the 9s, and I settled on shooting for 1:55 as a reach goal as an encouraging step towards Project Sub-4 Hour Marathon.

Then some serious time drops happened during my track and tempo workouts and October, and I started to think I could register a really serious PR. I entertained the idea of a sub-1:50, but instead settled on a super-reach goal of sub-1:54, the purported equivalent of a sub-4 hour marathon.

On Saturday, I made that reach goal, my A goal, by 28 seconds when I finished the race in 1:53:32. If you want the quick race recap, see the below table. 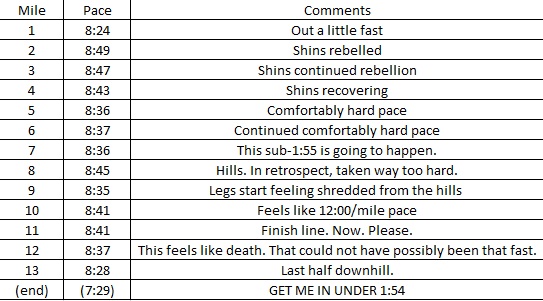 For the long version, read on.

I went into the race with a few confidence building workouts in the previous week, including a tempo run in the 8:30s and a stellar long run just six days earlier. It was time to see just how much I could take off my old PR, and how much I could come in under 1:54. Sarah and I got to the start line about 30 minutes before the start, and we broke off to settle in our respective corrals. Rachel joined me in our corral shortly before the gun went off, and soon it was time to run.

A 1:54 half marathon works out to 8:41 pace, and in the interest of finishing strong, I was supposed to be shooting for splits in the 8:40s for the first 10k. About half a mile in, Rachel noted that we were going about 7:30 pace, and we held back just a little bit. However, since I’m much more likely to go out to slow than too fast, I wouldn’t change this slightly-too-fast first mile.

Soon, I didn’t have a choice about slowing down. The fronts of my shins were hurting, and while I can run through this, it slows me down because I don’t quite feel the ground right. I know from experience that nothing helps except continuing to run to loosen them up, but I started to worry that I would be too far off my goal pace if they didn’t come to life soon. Rachel got further and further ahead, but we were each running our own races and my shins couldn’t support the pace she was holding.

The shin pain dissipated somewhere towards the end of mile 3, and I settled into a “sustainable but hard” pace in the high 8:30s while continuing to get in my Nuun and a couple of Gu Chomps at Mile 5 as planned. I caught back up to Rachel during mile 4, and while both of us were too busy racing to chat, it was nice to have the quiet support right there. 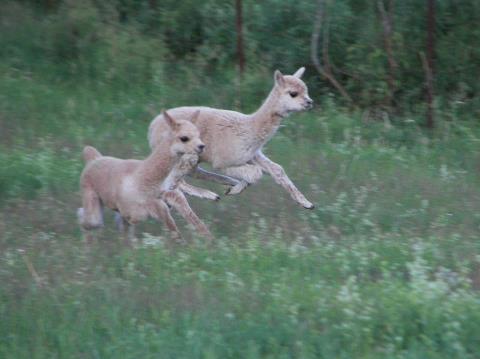 We were running through a park that wasn’t part of the full marathon course, so it was totally new terrain to me. However, I knew from reports on last year’s half marathon that there were hills here and that I’d be slowing down for this mile, but for some reason, I decided to charge up the hills. I was momentarily pleased to see that my pace barely budged despite the elevation profile.

This mile felt OK. Back to that “sustainable but hard” pace and ready to kick it up at the end.

These miles did not feel OK. My legs felt like they weren’t turning over, like my hips were tight and I couldn’t pick my feet up. I skipped some planned Gu Chomps because I didn’t want to upset my stomach, and because I didn’t feel remotely glycogen depleted. Besides, I felt like I was averaging over 10:00/mile – what good would they do? Rachel broke away to run to her own PR, and all I could do was run as fast as my body would go and get to the finish line as close to my goal time as possible, and chalk the race up to a lesson on not overdoing the hills.

Oddly, despite feeling a lot of pain and fatigue, my splits kept coming up just a few seconds slower than the previous miles. I suppose there is some value in just running and refusing to let up.

This mile still hurt – a lot – but I knew that coach would be hanging out here at some point, ready to push me to the end. She ran with me for a good part of the mile, but I had no energy to talk, or run after her ridiculously fast pace. All I could do was take advantage of the downhill finish and get as close to under 1:54 as I could. I saw the 8:28 pop up as I approached the finish line and realized it that my A goal was going to happen.

So 1:53:32 in the end. Under the A-goal. In a time that McMillan says is the equivalent of a 3:58:54 marathon, which indicates that I’m on the right track for the sub-4 hours in February.Even better, despite feeling like I was dying at the end, my splits were relatively close together, with the exception of the miles at the beginning when I was dealing with shin pain. 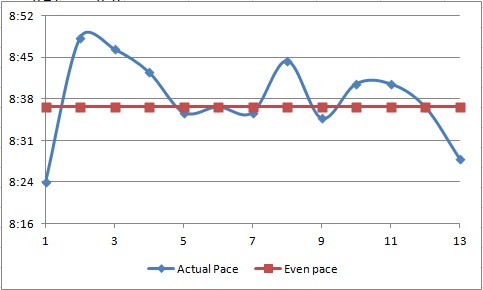 I’m satisfied with the time, but not absolutely jubilant. Yes, I know, we did establish a few days before the race that I was NOT allowed to whine about anything under 1:55, since that was the goal I set early in the fall. But that doesn’t mean that there aren’t improvements to be made, especially since I feel that I had the fitness to run a few minutes faster on Saturday. I have many things to consider as I move through Project Sub-4 Hour Marathon. Notably…


While there are always improvements to be made and the race wasn’t perfect, it’s still 18:28 faster than I went in my first half marathon 55 weeks ago.

Now it's time to run even faster. February 16 is coming.
Posted by Victoria at 8:39 AM