Now that I’ve finished my first Ironman and wrapped up the 2012 triathlon season, it’s time to figure out what my next set of goals will be. Of course, I have Ironman Mont Tremblant 2013, but that’s a long time from now, and focused training for that won’t start for quite a while.

So what to do between now and then? 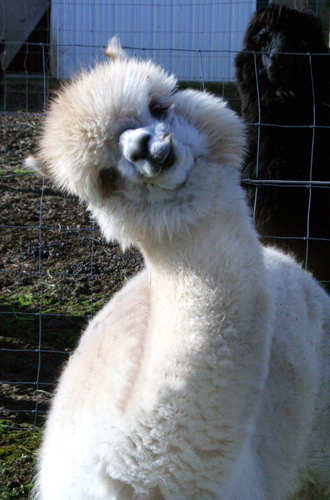 After a little contemplation, I decided that it’s the perfect time to improve my running speed, which was one thing I swore I would do after I ran/walked/limped for 5 hours and 48 minutes at the end of Ironman Louisville. While I loved the Ironman experience, I never, ever, ever want to spend almost 6 hours covering 26.2 miles again, and I want to be able to cover that distance much faster in Quebec next August.

The first chance to check in on my progress in a race situation will be at the Richmond Half Marathon on November 10, which will be my first standalone running race since I ran a 1:59:04 at the B&A Trail Half Marathon in March. After conferring with coach, we've settled on 1:55 as a reasonable goal, and my weekly workout schedules have recently been populated with more pace goals aimed at supporting the 1:55 half marathon target.

For the most part, I’ve been able to hit those pace goals, including a three mile effort in the middle of my long run on Saturday. I initially laughed at the workout that called for me to run nine miles with three miles at 15 seconds faster than goal half marathon pace. Then I saw that it would come less than 24 hours after another long, leg-intensive workout, and laughed harder. But then Saturday morning showed up, and I gave it a shot. 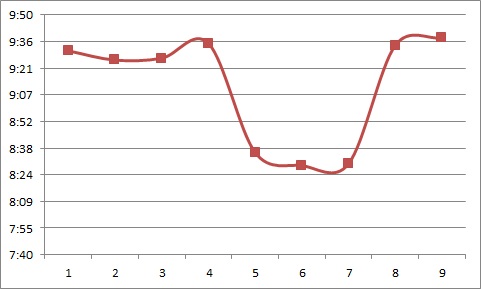 (Isn’t it fun to distort information by manipulating the y-axis?)

Looks like November 10 could be a very good day for a little 13.1 mile run.

Monday: A one hour tempo run, covering just over 10k, with the middle 30 minutes at 9:04/mile. The point was to hit goal half marathon pace (8:47/mile for 1:55), but residual fatigue from the weekend of travel and humid weather combined forces to keep me a little bit off target.

Thursday: More running! A 5 mile shakeout run with no pace tracking in the morning, then a 4400 yard swim with DCRP Masters in the evening.

Friday: A morning session dedicated to leg shredding. First, I got on my bike for the first time since Giant Acorn and did a 45 minute trainer ride. Then, I got to go to the gym for 40 minutes of leg-focused strength training…and came right back home for 45 more minutes on the bike.

Saturday: I was slated to run 9 miles, with miles 5-7 at goal half marathon pace minus 15 seconds and the remainder at an easy pace. This required hitting an 8:32 average for that middle section, and the idea of this was particularly humorous because, first, I’d never split a mile faster than a high 8 on a long run, and second, because I’d done a 2+ hour leg-killing workout the day before. I figured I’d shoot for as close to the goal pace as I could, reasoning that I’d only need to hold the pace for a little over 25 minutes. Mile 4 wrapped up, and I went for it.

To celebrate unexpectedly being able to do the workout as written, I swam 4000 meters with DCRP Masters later that morning. Usually, swimming is a great way to accelerate recovery by promoting bloodflow in the legs. However, our practice involved a bunch of sprints, some 50s off the starting blocks, and finally, the last insult – a lot of butterfly in the last 1000 meters.

Sunday: A 25 mile bike on Beach Drive, with a so-so average speed, probably due to being woefully underdressed for the early morning temperatures and a lack of bike time recently.


Also, in case you were wondering how my dad did in the Detroit Half Marathon yesterday, he finished walking the race in 2:44, which is a 12:30 pace. That's speedy walking.