I got to travel south for most of last week. 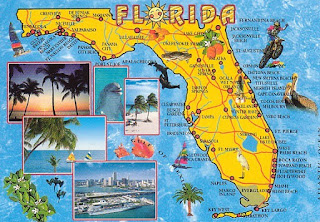 You might think that I was on vacation. But if you know me, you know that I’m constantly traveling to Florida for work, coaching, and synchronized swimming officiating, and never vacation.

Mostly because I do not like Florida. Sure, there are Floridians who I love to pieces. But the state itself? I could lead a happy life without ever going there again, especially after last week. I was there for five days to judge the U.S. Masters National Synchronized Swimming Championships in Sarasota, FL, a meet that I have to judge every four years to maintain my rating as a national-level judge. 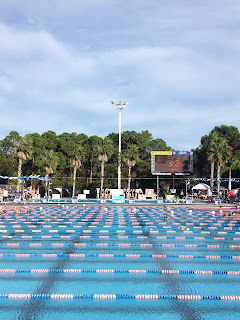 Beautiful pool, right? Sure. You know what wasn’t beautiful? Doing my long run at 5 am in sweltering humidity on a route with spotty sidewalk coverage and minimal lighting. Before you think I was enjoying views of the Gulf of Mexico, let’s talk about my route – it was a 2.4 mile loop around a bunch of strip malls, which was the best way to ensure that I had some light to run by for most of the route.

It got done, though. Last double digit long run before the Richmond Half Marathon, which is only 12 days away now.

Tuesday: 45 minutes of strength training in the morning, 4150 yards of swimming with DCPR Masters in the evening, including some sprint work.

Friday: The best opportunity for getting in a long run all weekend was Friday, since it was a shorter day at the meet and wasn’t a travel day. But even after identifying a time to squeeze in the run, there were several obstacles to deal with. Sarasota doesn’t offer plentiful sidewalks or well-lit routes, and sunrise wasn’t hitting until 7:30 am. Add that to the fact that, by 7:45 am, I had to be presentable enough to work as an official at a national meet, and it became clear that my best option was to drive to the meet site, run along a passably lit 2.4 mile loop with 85% sidewalk coverage…at 5 am. During my five trips around the loop, I wiped out once in a dark section, was miserable from the heat and humidity, and was generally unimpressed with the scenery of suburban highways and strip malls. 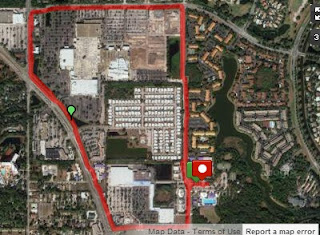 The run added up to 11.8 miles at an average pace of 9:43, and I finished up with enough time to shower, get my hair somewhat dry, and sit around giving out scores for a while.

Then, after six hours of officiating, I got in the pool for a 2000 yard recovery swim in the afternoon.

Saturday: Before a 12-hour officiating shift, 40 minutes of strength training, then 2500 yards of swimming squeezed in during one of the warm up breaks.

Sunday: A few more hours of officiating before getting on one of the last flights to land at DCA prior to Hurricane Sandy’s arrival. I was supposed to get on the bike trainer for an hour, but was dehydrated and beat down from too much time in the sun and all the travel.

Given that, I deferred that to Monday morning, even though it meant I wasn't on my bike all week. Whatever, it's technically triathlon offseason and I'm on a run-focused block.
Posted by Victoria at 12:23 PM