May 21-27: Swimming and Reexamined Race Goals

Last week’s training plan involved a ton of swimming, mostly because of the three open water races – a 5k, a 2 mile, and a 1 mile – over the weekend. The races were a mixed bag, and I’ll talk about that more on Thursday, but I did come away with a couple of medals…and a certificate. 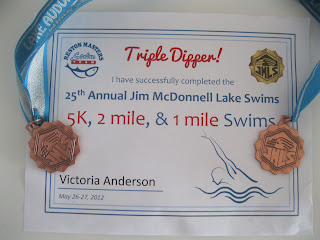 Now, this race was something that I hadn’t tagged as very important when I put together my schedule for the season. I was mostly on the lookout for opportunities to practice racing in open water, and the idea of joining OTHER people who thought it would be fun to swim a 5k race, a 2 mile race, and a 1 mile race in a little over 24 hours was also appealing. There were no time goals sketched out in January, and there was very little training specifically targeting THIS race, even though, of course, I’m training for open water swimming in general for my real target races.

And still, I was angry and annoyed with how I did. As I stewed about this for most of the drive back from Reston on Saturday, I thought of how something similar had happened during my other recent races – Charleston and Columbia. I took a race that wasn’t a target, raced it for other reasons, and got upset that it wasn’t my best performance ever.

Actually, let’s look at that in a little more detail…

If you’re watching at home, the theme is “sign up for a race just for fun, stay focused on training for the more important races on the schedule, invent a time goal about a week before the event, and then get angry when it doesn’t happen.”

I guess that the lesson from this weekend is not that I’m out of swimming shape (though I might  be), the lesson is that if I want to add a race to my schedule beyond the 2-4 target races for the season, I have to hold myself to sticking to the stated race purpose of practicing/having fun/etc. and not get weighed down by time goals.

Anyway, the swim-tastic week in summary:

Tuesday: 35 minute of glute/core strength work and stretching in the morning and a 2900 meter swim practice with DCRP in the evening.

Thursday: Another 35 minute session of  glute/core strength work and stretching in the afternoon, followed by 4100 meters of swimming with DCRP in the evening.

Friday: Rest day, of course partially dedicated to preparing for the three swim races over the weekend. While some people swear by a carbohydrate-heavy pasta dinner the night before an event, I know better. 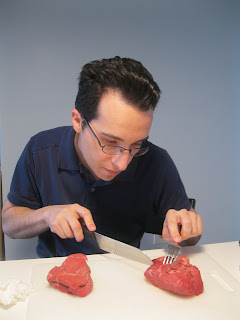 And oh, was that steak good.