As noted on Monday, I raced the Columbia Triathlon in 3:05:52 on Sunday. Of course, the time is never enough to tell the whole story, and EVERYBODY here wants the whole story, or they wouldn’t be reading a triathlon blog. So let’s go from the beginning.

The beginning starts on Saturday, which involved mandatory pre-race check in and bike racking. I’m conflicted regarding what I think about this. On one hand, it means that race morning is simpler, since you already have all your numbers and don’t need to fiddle with your bike. On the other hand, this is a major time sink the day before the race. Even though Columbia is nominally a local race for folks in the DC area, Saturday afternoon beltway traffic and a check-in taking place a few miles away from the race site itself means that this process can take four hours. Or more.

I think the race organizers are very aware of this, because I was greeted by a very efficient check in process that took a mere 3-4 minutes, which even included time spent weighing in to confirm my eligibility to compete in the Athena category (Which is the first time this has ever happened to me at a race. It’s a fair thing to do, and I’m surprised it isn’t done more often). 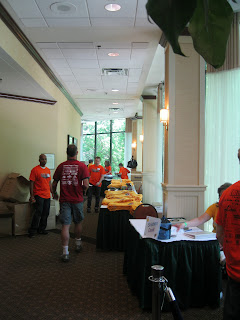 The expo didn’t really feature anything interesting, so I was out of there pretty quickly, but not without picking up all the race swag. The t-shirt and water bottle are pretty standard, but the bag and visor are a nice touch.

On to the bike racking at the race site, where I did a quick ride on the start of the course to ensure that my bike was functioning. With my front derailleur failing and dropping my chain in the first half mile. Happy to have found that before race time, I cycled through a bunch of the gears to ensure I’d fixed it, and was happy after 20 minutes. Bike racked, time to go home and get to bed early.

I woke up after a very vivid dream about my car not starting and leaving me with no way to get to the race, and figured I’d just get out of bed because surely it could not be more than half an hour prior to my scheduled alarm.

Oh, so THAT’S what kind of pre-race night it’s going to be.

After waking up at least six more times, I finally got out of bed at 4:15, grabbed all my gear, and got into my (perfectly functional) car to head to the race. And despite that early wake-up to ensure that I had transition all set up by 6:45 am, I didn’t start the race until after 8 am, thanks to the fact that I was in the second to last wave. Eventually, though I got to start the race.

Since I was in the second to last wave, I had the chance to watch several other waves tackle the course, which was a bit confusing because the first and last turn buoys weren’t visible from the starting area. Once we all got going, though, the course was quite obvious, and since I can swim with my head up without losing much, if any, speed, thanks to seven years of synchronized swimming, I stuck close to it. Oddly, it seemed that nobody else in front of me in my wave, or anybody in the waves that we started running over maybe 400 meters in, was doing so. Well, their problem. Stick to the line, finish with a descent time – faster, in fact, than one of the professionals in the race – and hop onto the bike.

Because I’m a fast swimmer compared to most age group triathletes, in smaller races, I wind up almost exclusively getting passed on the bike and never doing any passing. However, since this time, I was in one of the later waves, I knew that some slower folks from earlier waves would be out on the course, and that I’d FINALLY be able to pass some people and not feel like the worst cyclist on the planet.

I also knew that the course might be extremely crowded at that point, and I was right. I wound up pushing harder than I wanted to in a few sections in to make sure that I passed a slower rider quickly and didn’t get stuck with a blocking or drafting penalty. And shortly after one of those passes, while shifting back to the big ring after an uphill around mile 7, my chain dropped.

This time it was jammed between the frame and the crank, so it took a little coaxing to fix and I wound up on the side of the road for a minute. Not much time lost, but I was left to go and repass a bunch of people AGAIN.

Also, I evidently managed to cut myself and cover my leg in grease during this process. 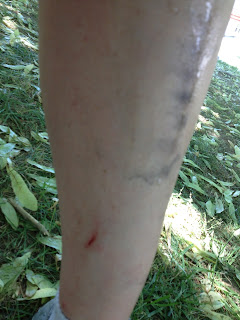 Didn’t realize that until after the race. For the rest of the bike, I was too busy ensuring that I hadn’t fallen behind on nutrition or hydration with all the distractions from passing and chain dropping to notice any cuts or bruises. Besides, I had a hilly run course to tackle after conquering the bike course hills.

Now I run around hills a lot. The Tenleytown/Cathedral area, near where I live and often run, has several steep hills. Connecticut Avenue is packed with rolling hills. So while a hilly bike course scares me, a hilly run course isn’t too terrible.

Yeah, about that. Some of those hills, particularly the one just after mile 3, honestly looked like a vertical wall from the bottom. Thankfully, in advance of the race, my coach had advised that I should walk the tops of the hills, which, in a way, I turned into permission to walk part of the run course – something I normally wouldn’t do during an Olympic distance race with a run of just 10k. It was a necessity, since I honestly wound up power walking past some people trying to run to the top of the super-steep hills that never, ever stopped.

My plan called for me to go easy for two miles, build for two miles, and then go hard until the end. But I used the hills and my pathetic pace as an excuse to give up…and was fully aware that I was doing so during the run. It was a pretty sad run time for somebody who just ran a sub-2 hour half marathon 10 weeks ago. And basically, all because I was being a whiny wimp.

Eventually, at some point, I finally saw the finish line and went for it to finish in 3:05:02. And shortly after, ran into Ed, one of my colleagues from Philadelphia, who also raced and finished in a pretty quick 2:44. 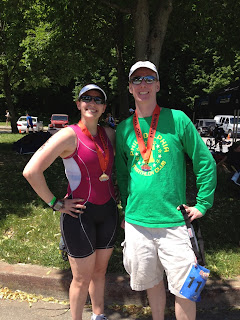 I wasn’t sure whether or not I had to stick around for the awards ceremony, since, on the run, I got passed by a bunch of people who looked like they might have been 39&Under Athena racers who happened to be wearing calf compression sleeves that obscured their division markings. NOT OK.


I mean, my need to know my standing in the race trumps anybody’s injury prevention needs, doesn’t it?


It turns out that none of them were in my division, and I stuck around for the awards ceremony to grab this. 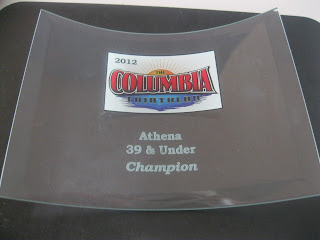 Which should, in theory, make me happy about this race, especially since the division win means that I get a free entry to the 5i50 U.S.Championships this summer, shouldn’t it? And since it puts me 17 minutes faster than I was nine months ago at Luray, which is universally considered to be an easier course, I should be happy with my time, too, right? I mean, I beat one of the professionals on the swim course, finally passed people on the bike, and dealt with several bike malfunctions relatively efficiently without any tantrums or crying. A good race, yes?

No. Aside from the swim, I’m really not happy with the race. There was no good reason for me to finish in over 3 hours, which had been my soft goal for the race. Sure, I lost about two minutes to the dropped chains, but the real killer was psychologically bagging the run. I would post my heart rate data from the run here to illustrate this, but it’s so obvious that I wasn’t pushing myself at all that it’s embarrassing. Why? Again, no good reason. Maybe I need to run more and run faster in training…but that’s no excuse for not running as fast I could on race day. It’s really similar to the way I gave up at the end of Charleston, but this was a much shorter race that I should have been able to execute well until the very end.

I don’t have another triathlon until August – Culpeper, a tune-up for IM Louisville – and won’t really have a chance to sort this out and address this in a race for a while. Lucky, my coach has PROMISED me lots of long runs and tempo runs and progression runs in my future.

Anyway, that’s over. Nothing to fix it now.

Besides, I don’t have time to sulk, because this weekend, I’m doing an open water swim race. Er, three open water swim races. 5k, 2 mile, and 1 mile. Plenty of opportunities to perfect my sighting technique and swim for the sake of enjoying what might be the most awesome sport on the planet.