This is really a three-for-one race report, because, unlike most reasonable people who only entered one of the three distances offered last weekend during the Jim McDonnell Lake Swims in Reston, I joined 45 other lunatics distance swimming enthusiasts who took on the triple dip challenge of swimming the 5k, 2 mile, and 1 mile races, all in the space of about 26 hours.

First up was the 5k swim on Saturday morning. I got there with plenty of time to take in the scenery. 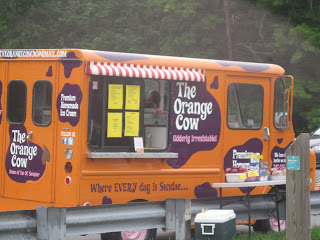 Since the lake temperature is always well over 70 F for this race, I had no plans to wear a wetsuit. I figured that the fact that the lake was 76-77 F on Saturday would lead almost everybody else to the same decision. The lake was essentially the same temperature as most competition pools, and there is no need to wear a wetsuit for warmth. Unless, of course, you are scared of open water and can’t fathom the idea of swimming 5k without your security blanket.

Apparently, a lot of people needed their blankies, as I saw many wetsuits, including some full-length wetsuits, all over the start area. I hope they started well hydrated, because it was NOT cool in the water. People: just trust in your ability to swim for real, without flotation devices, and it will be easier next time around.

(I know that some people wore wetsuits to see if they could deal with being in one for over an hour before they did an ironman swim leg or the like. I still think they're all nuts. That water was way too warm for it, and you can find a colder place to test your wetsuit, leaving the 5k race open for, well, racing.)

Anyway, the Reston Masters categorize the floatation device users wetsuit swimmers separately from the other swimmers, so when it was time to start, I lined up with the group people swimming without safety blankets and waited for our heat to get called up.

We swam three loops of a course that was just a shade over a mile. I’d been told that the course was easy to navigate, but those who told me that probably didn’t account for the fact that one could be stupid and start swimming towards the wrong buoy, which would force said person to backtrack to avoid cutting the course. Navigational issues aside, I had two other problems. The first was that I felt tired almost the whole time – not tired muscles, more like tired brain and body that wanted to take a nap. The second problem involved the goggles that, despite being just fine for Charleston and Columbia, were so tight that I started to get dizzy and almost pass out. Rather than drowning, I stopped for 30-45 seconds to eggbeater and loosen them during the second lap of the lake.

My final time was pretty disappointing, not just because of the relatively slow pace, but also because I was pretty far behind many of my DCRP teammates who are about the same speed as me in the pool. This means that I either had a bad race, or am not so great at open water swimming. But, most likely, it means both.

Luckily, I had two more races on Sunday, which offered me the chance to take revenge on the course again. 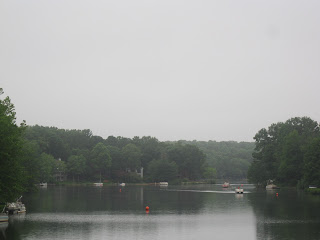 This time, the water was 78 F, meaning that NO WETSUITS WERE ALLOWED. That’s right. You HAVE TO ACTUALLY SWIM FOR YOURSELF. Try to not panic, OK folks?

I ran into Beth and Jon right before the race, and congratulated Jon on his willingness to take on an open water swim like a real swimmer – no wetsuit, just man versus water. We lined up again, and I caught a glimpse of Allison right before our wave went into the water.

Given the sighting issues I’d had during the 5k, I decided to latch onto James, one of my DCRP teammates, from the start. Sure, there was a drafting advantage, but I mostly used him for navigational help, since he is extremely familiar with the course after years of racing it. I swam just a little behind his hip for the 500 meters or so, which basically meant I was staring at his butt. That’s OK. He’s faster than me in the pool, so it was unsurprising when he pulled ahead of me, but I was still able to follow him without drafting for another 300-400 meters, which gave me a good idea of how to navigate the course for the second loop.

THEN somebody showed up to draft off ME. I lost that SOMEBODY after one of the turn buoys, but then I found somebody drafting off me AGAIN when we started the second lap. I’m sure that Allison thought she was being sneaky, but I really DID know that it was her the whole time. Halfway through the second lap, I dropped back to draft off HER (HOW DO YOU LIKE THAT NOW?), and then lost her at the same turn buoy again. She wound up winning our age group, about 30 seconds ahead of my 3rd place finish. 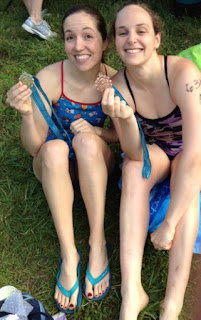 We still both got medals. Rematch next year is on, though.

But in the meantime, I still had another race to swim. One more lap around the lake for the 1 mile race!

I was ready to conquer the course once and for all, navigate perfectly, and swim all out. About 100 meters into the race, I realized that my shoulders and back disagreed. Sore. Tired. Filled with lactic acid. But hey, why NOT do a one mile race at a slower pace than a two mile race on the same course? I still wound up third in my age group, this time just 20 seconds away from first place.

Despite being a little slower than I wanted to be in each race, in the cumulative rankings for the weekend, I managed to come in first out of the five women in my age group who entered all three races. Also, I got a certificate for doing all three races.

Which I took to the orange ice cream truck for my real prize. 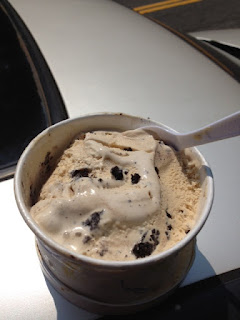 The swims were slow, sometimes disappointing, but I did manage to swim 6 miles in about 26 hours, completely toast my shoulders and back, and come away with ice cream.

Also, I raided the free dried plum samples something fierce. 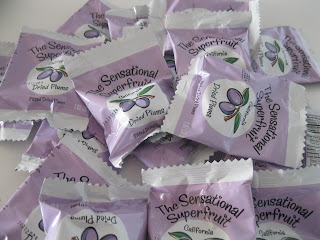 Now to figure out what to make with 20 ounces of dried plums. Ideas?