Race Report Download - Three for the Price of One

It’s a good thing I’m not paid to write about this triathlon thing, because I’ve done three races over the past six weeks and not written about them here. I meant to do in depth race reports, but instead, let’s go with the rapid-fire summary.

Going into this race, I thought that with Eagleman and Challenge Williamsburg going on the same day, I might have a shot at placing in the top 3 overall, with all the fast women in the region otherwise occupied. Then, before the swim, I spotted last year’s sprint overall national champion, her almost-as-fast mother, and somebody else who goes to world championship events more often then I get my haircut. So much for that, but I did manage to nab the top podium spot in my age group. 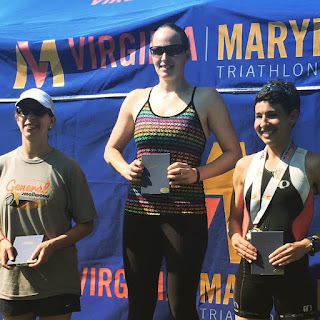 Other notable things from this race:

We woke up at something like 4:45 am to POURING RAIN, and waited until a break in the rain to head over to the race site to that we could avoid getting our gear wet (spoiler alert: didn’t matter). I went for a warm up jog and noticed that non-trivial portions of the run course were totally flooded out and figured we were going to be in for a fun one. I managed to avoid crashing (score) and stayed in the very front of the field throughout the race to wind up 8th overall and 2nd in my age group. Riding in the pouring rain was so bad that it was almost perversely fun, and I put out some pretty high power numbers despite bleeding out watts on every corner to avoid crashing. All in all, a successful day. 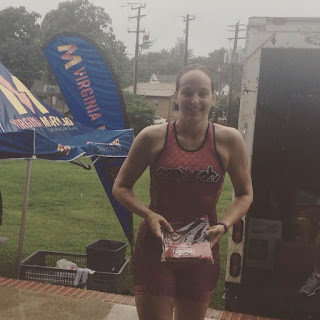 After the sprint race, we went back to our rental house, dried off all our gear, and foam rolled and the like to get ready for the next day. Went to bed early, and then woke up 45 minutes later completely unable to breathe. My sinuses were so inflamed and congested that I couldn’t even blow my nose, which had the added bonus of instigating an asthma flare up. I didn’t get back to sleep at all after that, even after I finally took the decongestant that Jason threw at me. Obviously, I had managed to get sick in the 16 hours after finishing the sprint race, and considered not starting, but remembered how many times a good workout helps me clear out my sinuses and makes me feel better in the long run.

Got to the site, went out for a warm up jog that instigated a fit of wheezing, took a couple of puffs from my inhaler again and tried more running with minimal luck. I told Jason I was having a very hard time breathing, he suggested that maybe the swim would help clear things up. Great idea!

The swim did help relieve a bit of sinus pressure, and I somehow managed to stay on course much better than I usually do, and was happy about where I was in the field heading out onto the bike. I was able to hold some pretty nice power numbers and stay in the front of the women’s field for a good 10 miles.

Then a raging sinus headache, complete with vision problems, showed up. I hoped it would start to recede, but it only got worse throughout the bike and I planned to talk to Jason about at DNF when I saw him at T2, but when I didn’t see him at T2, I decided to try running. I *did* see him at mile 1 on the run course, and I swore he told me to “keep going” when I told him I was dizzy and sick, but it turns out he actually told me to “do what [I] have to” and this resulted in a funny finish line exchange.

I essentially walked the majority of the run course because I was getting really dizzy from the headache and general sickness hitting me harder and harder. Maybe I really *should* have DNF’d, either way, I didn’t put too much stock in the results from that day because 1. Obviously I was in shape, since I performed well the day before and 2. Shit happens and sometimes you get sick at exactly the wrong time.

So that’s how June and July races went. We leave for nationals in about 18 hours, and we’ll see there how a season of short-course focus pays off on the big day.