Since I can’t resist a double race weekend, about 5 minutes after finishing the Rock Hall Olympic Triathlon, I was rehydrating and working on glycogen replenishment (jelly beans at the finish line, brilliant idea) so that I’d be set to go for the sprint race the next day. The heat during the Olympic distance race took quite a bit out of me, and I spent the afternoon taking in a lot of fluids and electrolytes and icing my legs. I woke up in the middle of the night with intense pain in my hip flexors, but was fine when it was time to get going in the morning so I put that out of my mind and went to the race site to set up and warm up. Soon, it was time to line up for the start with the rest of the 39&Under women.

I took off pretty hard at the start, and three women surged ahead, only to drop back about 100 meters later. I was pretty sure I made the first turn buoy before the rest of the wave, and gave myself a pat on the back before discovering what was in store for me for the rest of the swim. 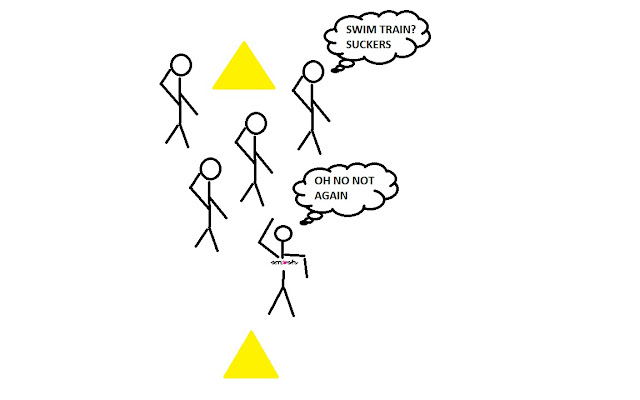 Yep, the Wall of Dudes was out there in full force, thanks to the fact that 300+ of them started 4-12 minutes before us.

At this point, I lost track of any other women in the wave and just worked my way through the Wall of Dudes. As we neared the swim exit, I (accidentally) clobbered one guy with a stroke and was pretty sure it looked like Jason.

I mean, all’s fair in love and open water swimming, isn’t it?

Once I got out of the water, it was confirmed that I was first woman out of the water (the three faster women were in a later wave), and I ran into transition desperate to hold onto the lead as long as I could.

There was one woman (Missie) who passed me right out of T1, so I followed her at legal distance and let her set the pace while I relaxed. After about two miles, my power numbers were a little lower than I wanted them to be, and I was concerned about other women catching up to us, so I passed her and settled into my power target – until I ran out of gears thanks to the substantial tailwind that had me pushing something like 26 mph.

The other challenge was the continued battle against the Wall of Dudes. Since some of them got up to a 12 minute head start, we were behind athletes substantially slower than us, and at one point, I wished I had a speaker that just announced “ON YOUR LEFT” on repeat.

I found myself referred to in pejorative terms at least twice for this (classy, gentlemen); dudes, if you don’t like women shouting “ON YOUR LEFT” behind you, there are two possible solutions.

Second, bike to the right except when passing

In fact, maybe do both.

As we continued to work through the Wall of Dudes, Missie repassed me at about mile 8. I stuck with her until mile 11 or so, but after that, I lost her in the Wall of Dudes. Coming into transition, I wasn’t quite sure how far ahead she’d gotten, but figured I’d find out on the run.

Based on my typical ranking in the bike-run transition, apparently this is what I do in there.

I started out around 7:30/mi pace for the first mile because this is how I envision the run course any time I am near the lead of a race exiting T2.

Soon, though, I just got way, way, way too hot. It was hard to push beyond what felt like a jog and the concept of walking was extremely inviting, but the thought of that stampede behind me kept me going. As I approached the halfway turnaround point, I saw Missie running back towards me, and we exchanged a side-five. 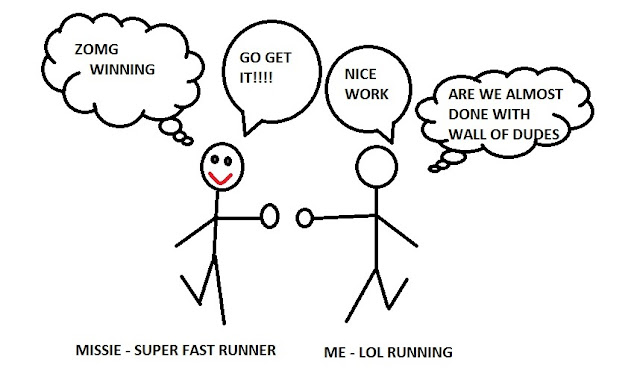 In the last mile, one other woman passed me, and between the heat and the race the day before, I was about done and had no chance of going with her. My time was still the 3rd fastest run time I’ve logged in a sprint tri, and the only two others that were faster were on 40-50F, overcast days, so I don’t think they are comparable.

Coming in fourth overall – getting beaten by a woman in a wave behind me AGAIN - was not happy. I know that the Victoria of two years ago would probably like to smack the Victoria of today for whining about coming in 4th in a field of over 250 women and winning her age group, so I do have to keep some perspective, but that’s STILL two races where I’ve just missed the overall podium.

At least I ran fast enough to hold onto the age group win because I knew there were two fast runners in my AG right behind me and I had to push to make sure they didn’t catch me. I guess I have some more work to do before I can get up on the big podium, but this will do for now. 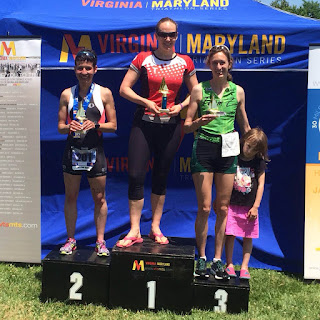 The good news is that it is abundantly clear what I need to work on - maintaining my swim and bike fitness while improving my run and tolerance to heat. My coach and I have some ideas on both, and I hope to be able to see some improvement by the end of this season so that I can put together an even better race.
Posted by Victoria at 8:13 AM