First triathlon of 2015 is in the books, and I got this nifty mug out of the deal by coming in 3rd in my age group at the Richmond Sprint Tri last Saturday. 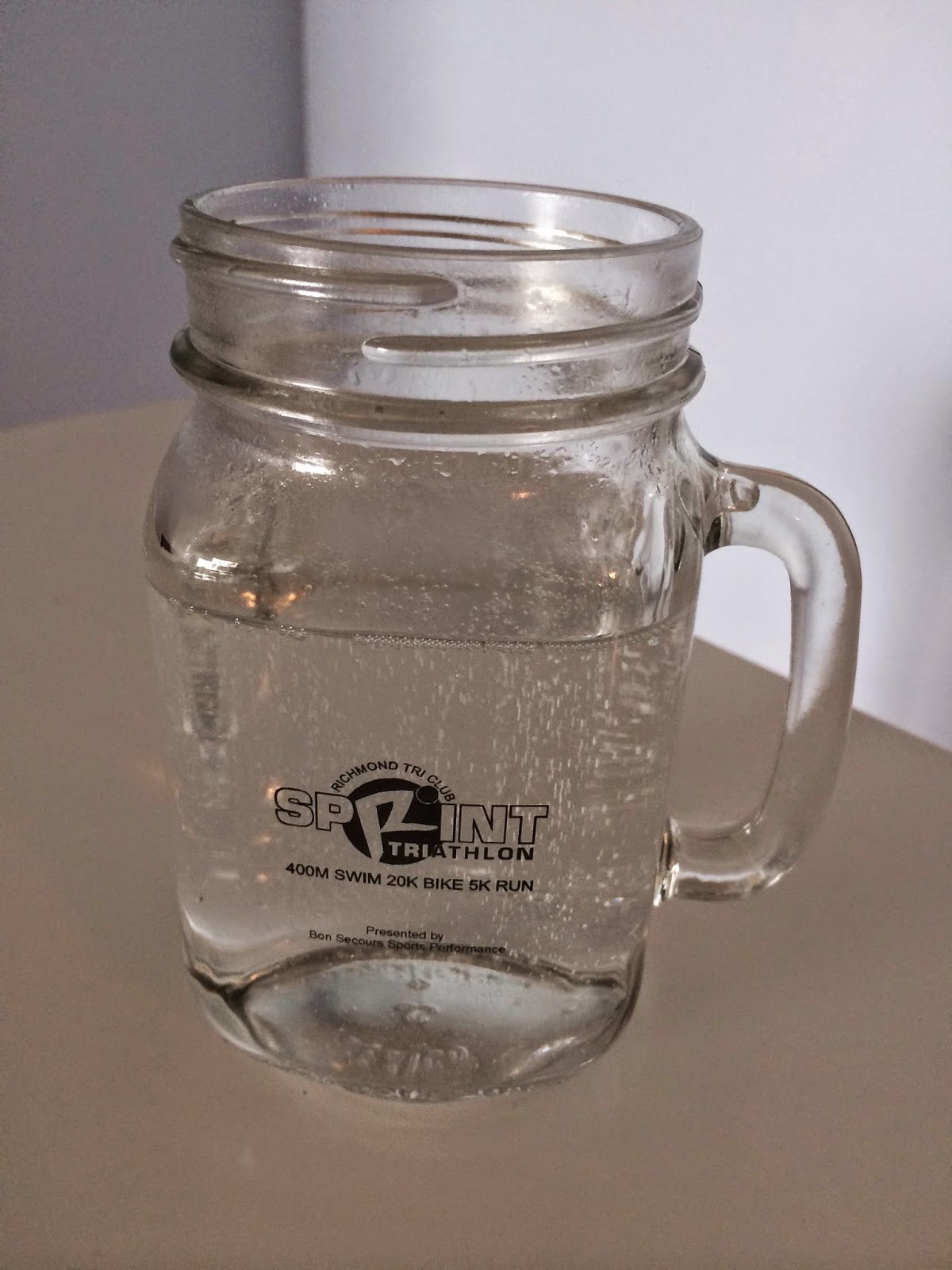 I wound up third in my age group and 11th out of the women’s field, which is alright. The race wasn’t perfect, but was a decent way to kick off the triathlon season.

The first unexpected event of the race came before I even left for Richmond. I was glancing through the athlete guide and the swim wave list, and noticed that I’d somehow been put into the elite women’s wave. 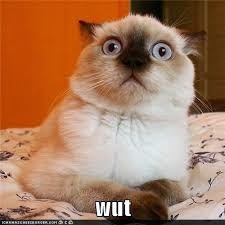 Before we move on from this, I want to clarify two things:

1. I have no delusions that I am an “elite” triathlete by any standards whatsoever. In fact, I probably don’t qualify as “elite among triathletes living in the 20008 zip code with a last name beginning with the letter A.”
2. I definitely did NOT ask to be put in said wave and am still unsure of why this happened.

However, once I realized this meant that I wouldn’t have to crawl over people during the swim, I decided it was a very welcome opportunity to race with essentially no interference from earlier waves and went with it.

Once I got to the race site, I discovered another nice feature of being put in this wave was that we had our own rack right next to bike in/bike out. Sweet. Minimal running in bike shoes, everybody knows how much space they get on the rack, and it was an easy, orderly setup. 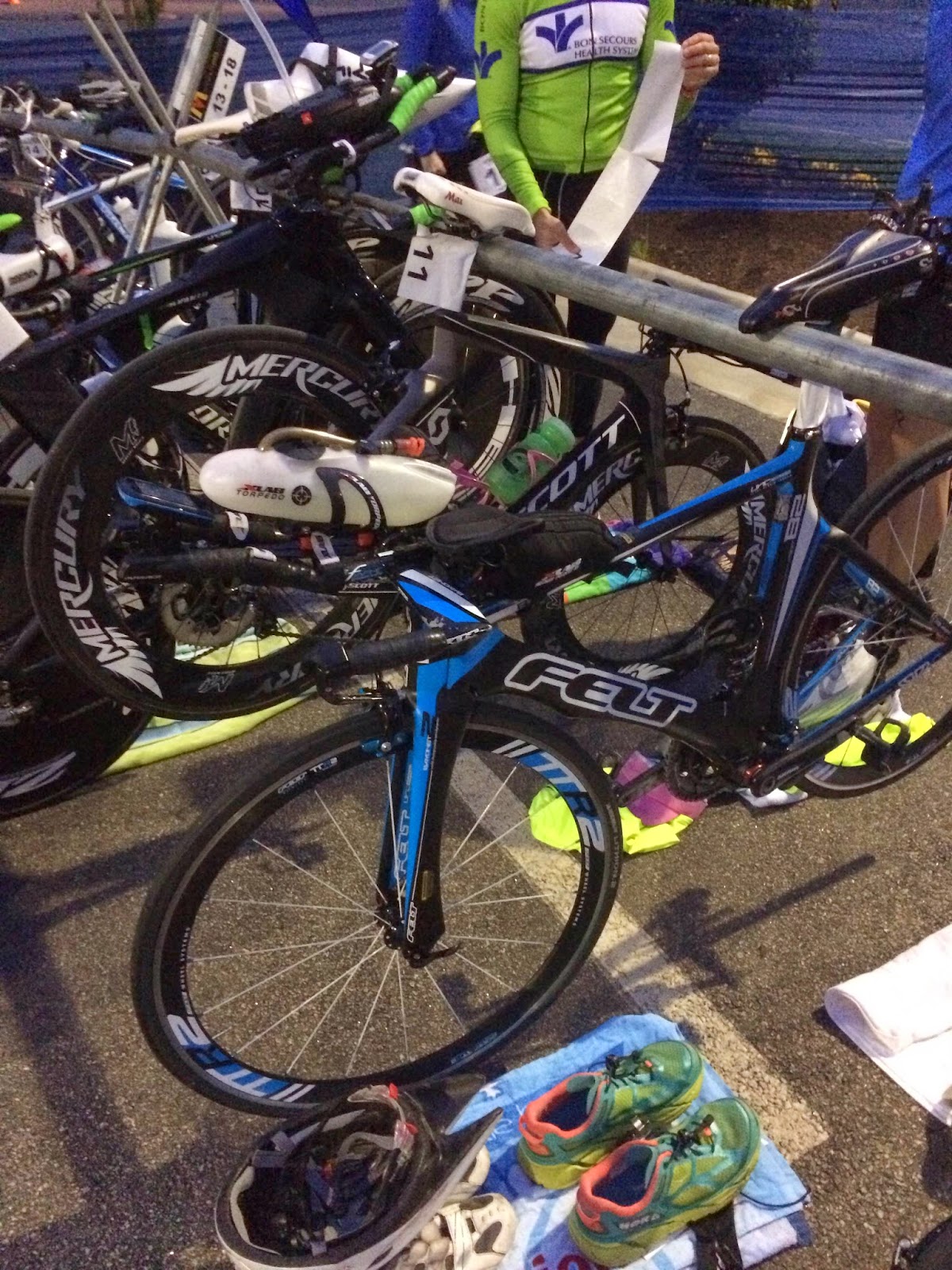 The race started pretty early, and it was quite dark, leaving pretty much no good option for a bike warm up, and only scattered parking lots and sidewalks for a run warm up. I jogged around for about 10 minutes, and then headed inside to warm up in the pool, which was only open for warm up until 6:30 am. In retrospect, this was not nearly enough warm up, and I'll be doing a better, more focused warm up for future races.

So even though this swim was in a pool, we had an “open water setup” and had to navigate buoys, just like you would in an open body of water. Rather than try to explain this in detail, here’s a “course map” from the race organizers. 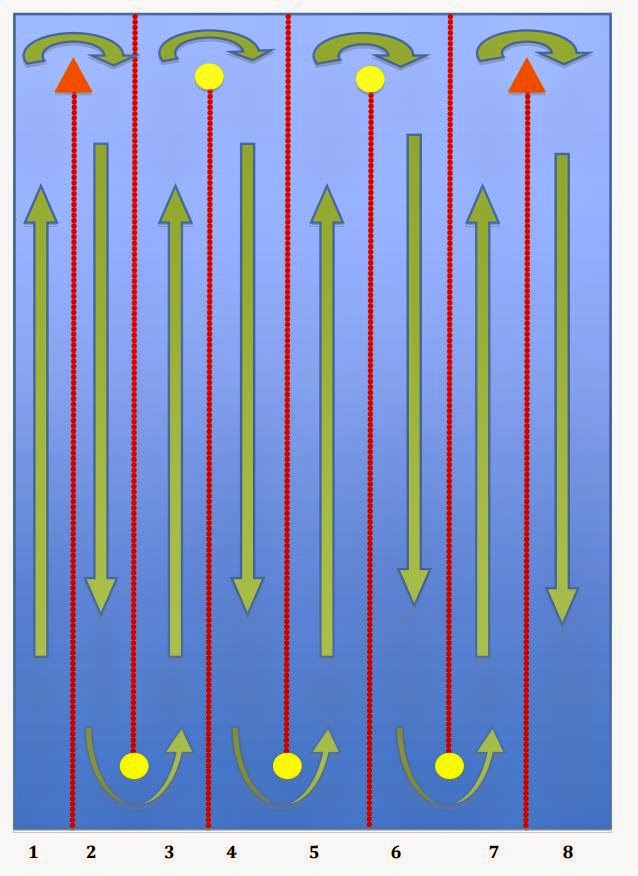 There were two other women in our “elite” wave who were about the same speed as me, and we swam most of the course together. I definitely lost some speed doing horizontal 180 turns around those buoys (unsurprising), but swam at a good effort level and came out of the water third.

I passed one of the women who beat me out of the pool in transition and did not delay getting out of there one bit. Time to ride in the balmy 40F conditions!

I put in a few substantial weeks of bike training following my February marathon, with my power numbers finally getting back to something respectable last month, and was excited to see what kind of power I could hold up for a 12.5 mile bike leg. I found myself passed by a couple of women out on the course, which was a little discouraging, and I just lacked the drive to try to keep up with them. I got to a point in the last quarter of the bike leg where I was wondering if I was still on course because there was NOBODY I could see and I hadn’t been passed by the non-“elite” men yet. Finally, a couple of them caught up to me, but I was still a little bit off my target power. Couple of things that led to this – one, lack of training specificity at sprint triathlon power output for sustained intervals, two, taking every corner like a wimp. I guess the good thing about early season races is that it illuminates our deficiencies quite nicely.

Continuing my tradition of mucking up T2, I rolled into transition and found that my hands were so frozen that I couldn’t physically hold my running shoes to put them on. Thank God I had decided to run sockless or I might still be in transition trying to get them on with my frozen claw hands.

Like I said in my previous post, one of my major goals this season is to consistently run under 8 min/mi off the bike in Olympic distance races – which means going quite a bit faster than that in sprint distance races. Once I got my act together and got out onto the run course, my legs felt great and I was able to hold a pretty good pace, though I definitely overran the course, which was two meandering loops around parking lots, a design that makes it difficult to follow the best line. 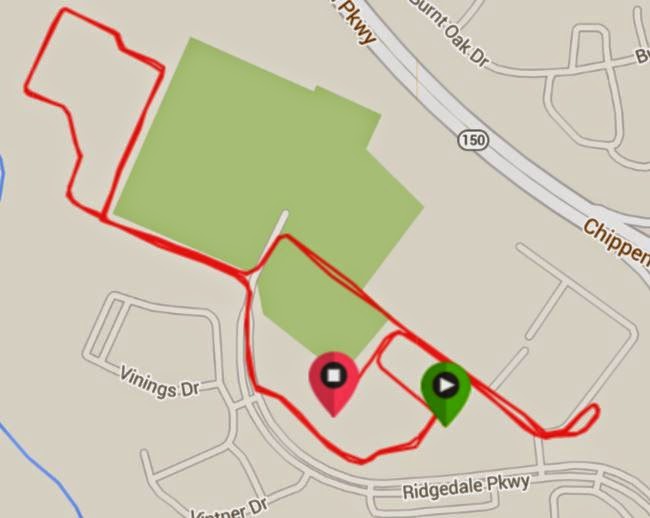 I got passed by two other women who were just better runners than I am, but was relatively pleased with the pace I held despite the many, many turns on the course. I think it lines up nicely with my run goal for the triathlon season, and was encouraging.

I crossed the finish line before 8:15 am, and thanks to being placed in the “elite” wave, there was no line for post-race massage (bonus) and I had plenty of time to clean up and load my gear in my car before awards. 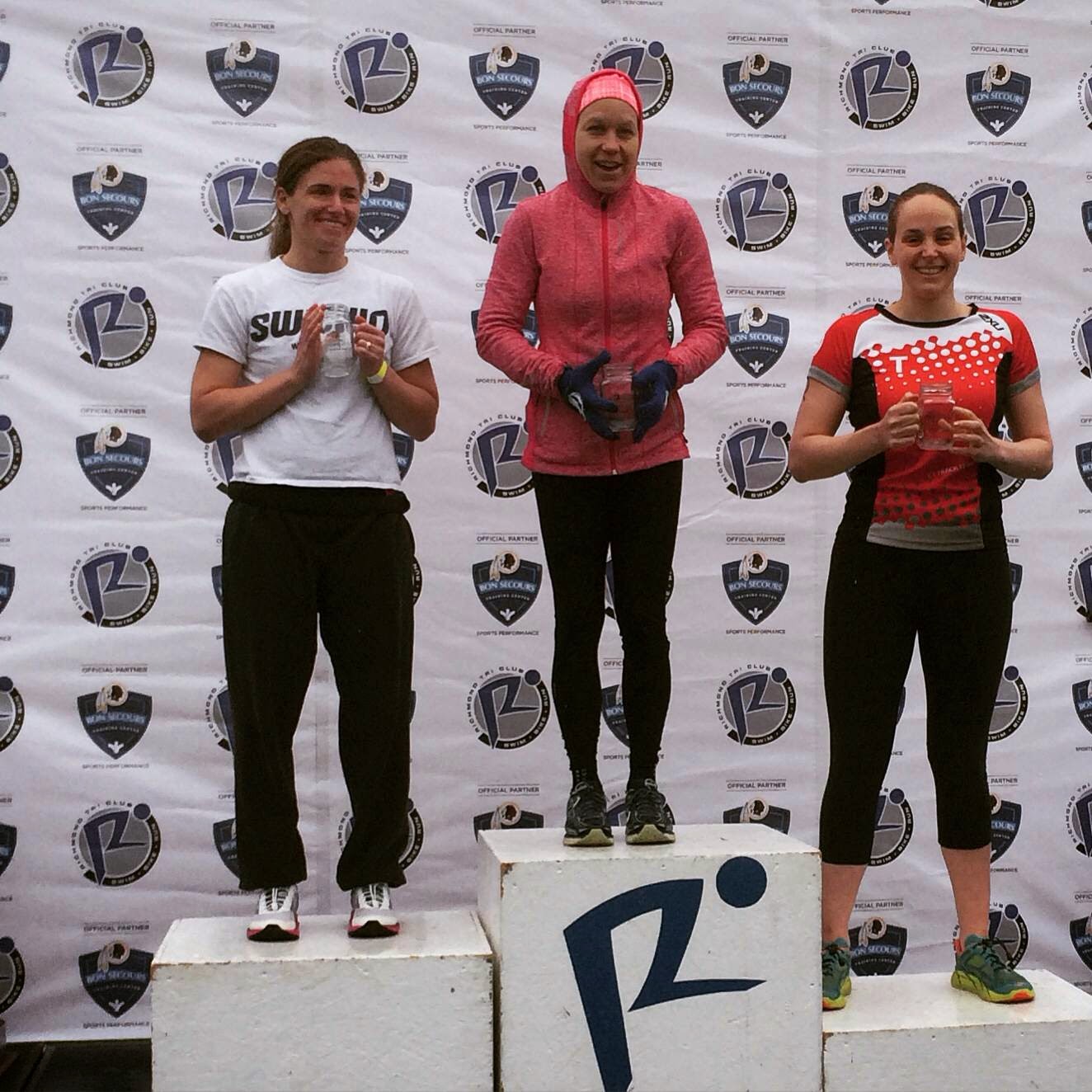 \
3rd place in my AG and 11th overall is a little lower than I would have liked to have been in the field, but not too far off target. I posted a decent run, and got some useful feedback about how to improve my bike training to perform better in other races this season.

Finally, as for my placement in the “elite” wave, which I still question, there were nine of us in the wave, and I finished 7th out of the group and 11th overall. So, I wouldn’t say that I belonged, but I wouldn’t say that I didn’t belong, either. In either case, it was the race director’s call, so I’m not going to feel guilty over taking up a spot.