I started competing in triathlons about three years ago, and in that time, have completed:


That sprint happened to be one I did on five days’ notice on a bike I’d purchased about a month earlier. I finished somewhere in the middle of my age group, my calves seized like crazy on the run, and I decided that was enough of that, please pass the long races, thank you, have a nice day.

However, in the interest of gaining some speed for the rest of the season, given that I am planning nothing longer than an Olympic distance race, I’m trying these “sprint triathlon” things again. First up was the Montclair Triathlon on Sunday. Because this was three weeks after a half ironman and in the middle of the build up for Age Group Nationals in August, there wasn’t really a real taper plan. Instead, I prepared for this race by doing a 10 mile run at 4:30 am on Thursday before a nearly 12 hour workday, discovering that the Di2 on my time trial bike was all screwed up while riding on Friday, and fussing with my bike until it was back in working order.

The nitty gritty of how the day went:

Since this was a shorter race, and I take a ridiculous amount of time to warm up, I tried to get to the race site early, but was foiled by my own inability to realize that it was 50 minutes away from home instead of 20 minutes away. I still go in about 3 miles of biking and a little over a mile of running, plus a quick swim before the scheduled 6:45 am race briefing.

7:05 am. Announcement that race will be late because the cones are all screwed up.

7:15 am. Sitting in the water doing nothing

The advantage of standing around forever was that I got to line myself up behind a couple of women from the DC area who I know are fast. I hung onto their feet  for about 100 meters and then got shut out by some men in our wave who were part of relays, got disoriented, and slowed down. I picked it back up for the second half, but the time was much slower than I’d have liked. It probably didn’t help that my tri suit seems to be a lot bigger than I remember it being and carried a bunch of water, yet for some stupid reason, I decided against wearing my swimskin over it.

Knowing that I was a little slower than I wanted to be, I looked at my time as I exited the water, figured I couldn’t be more than a minute or so behind the leaders (I wasn’t) and got ready to ride my bike.

Two notable things about this bike leg. First, I have been biking A LOT since April. It’s my weak leg in almost every race I do, and the difference in my ranking for the bike vs. the swim and run is usually drastic. I was sick of it, so I seriously increased my bike volume. Hit several 150+ mile weeks. Did tempo rides, threshold rides, easy rides, long rides, short rides, rides on my road bike, rides on the trainer. I just rode A LOT this spring. It didn’t seem to place me a whole lot higher in my age group at Eagleman, but I didn’t lose as much ground as I usually do. A start.

Sunday, however, I hardly lost any ground at all. I passed a couple of women, and one passed me, and since the course was two loops essentially made up of two out-and-backs a piece, I got a chance to look at how much time I was losing to the lead women. Answer: not much more than a minute or two. This never happens. Ever. That was pretty encouraging, and I was pretty happy to see that I placed 18th on out of all the women on the bike leg, pretty much in line with where I placed on the swim.

The other notable thing is that I decided to race pretty much blind. Didn’t watch my power/heart rate/pace. Just go. I felt like I was pushing the uphills and downhills and riding as aggressively as was safe on a semi-crowded course, but then I downloaded my data. 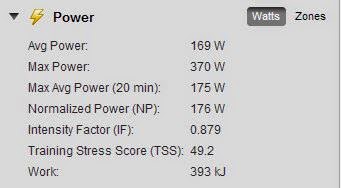 Sigh. I’ve done 30 minute tempo efforts in the middle of 2+ hour workouts at well over 180 watts. That’s RIDICULOUSLY low, and my heart rate wasn’t anywhere near my lactate threshold. The conclusion? I do benefit from seeing some data while racing, as long as I can use it to motivate me to push harder and confirm that I am still biking within my capabilities, while avoiding letting it send me into a spiral of negativity.  Experiment complete, lesson learned.

After fighting the heels of my shoes in transition for way too long, I came off the bike and my legs felt AMAZING, which should have been my first indication that I didn’t push hard enough on the bike. We started off running up a steep quarter mile hill almost immediately, and I just kept plugging along until we hit slightly more reasonable terrain. The run course rolled quite a bit, and was never really flat until the finish chute.

Here’s the thing about those hills: since Eagleman, something has felt not quite right with my right foot, which has translated to something being not quite right with my entire right leg. This is especially pronounced on uphill runs, and while I thought I addressed this by getting a new pair of shoes last week, I had some pretty intense foot pain and a very weak stride on all the uphills. I was struggling pretty badly from a pain perspective, but didn’t even come close to maxing out my aerobic capacity, even at the end of the run.

For reference, my running threshold heart rate is about 173 beats per minute, and I should have been pushing that for at least the last half of the run.

It felt pretty slow, and a lot of women passed me, so after I finished, I was surprised that the run time was a 26-anything. I suppose the good news is that I can do a hot, hilly 5k with a dysfunctional leg, feeling pretty miserable, in well under 27 minutes. The bad news is that between fighting with my shoes in T2 and limping through the run, I went from 2nd in my age group to 4th – less than a minute off the podium.

So nothing shiny as a result of my race. But I did manage to come in towards the front of the women’s field, and for the first time EVER, my bike and swim placement were pretty close to each other. This means that I either had a horrible swim or a great bike – or maybe a little of both. Either way, I’m glad all that bike mileage has helped me improve my speed and placement within the field a little bit.

I also got confirmation that racing totally blind in a triathlon is not for me - I need a little external motivation to push hard, especially in shorter races. It was an experiment worth trying, but next time, I'll be checking up on my power numbers throughout the bike leg and watching my heart rate on the run to push myself more.