There are a lot of reasons to write up a race report. To reflect on your performance; to learn lessons for next time, share the experience with others; to provide an overview of the course for others.

To have an excuse to post the one flattering race picture you’ve ever gotten. 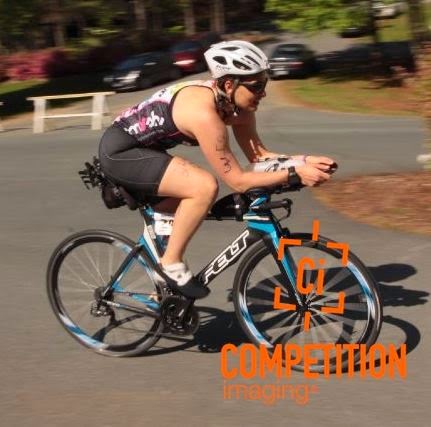 The Monticelloman Olympic distance triathlon was a month ago, and it went OK. Considering I spent a good deal of February and March in less-than-stellar physical condition, with a training log that reflects that, I went in with no expectations, other than to get an assessment of how my training was going, and fine-tune race strategies for the rest of the season.

I was a few minutes slower than I was at Nation’s Tri last year, but this race featured relatively hilly bike and run courses, so I’ll call the performances roughly equivalent. Not amazing, but not terrible.

More importantly, I used the race as a big wakeup call on several things I’d been dismissing as nothing to be concerned about in training. A race  has a way of revealing weaknesses in a way that you can’t ignore. For example, my open water swimming is still lacking. 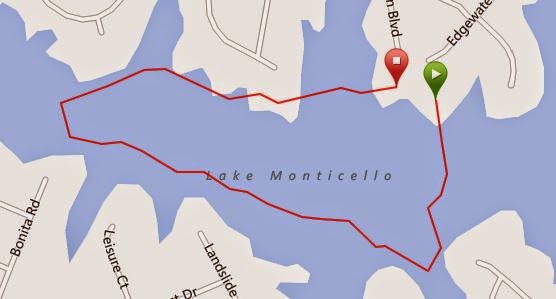 Note that I have managed to master land swimming. Thank you, GPS signal error.

Obviously sighting and course familiarity were an issue in this case, but my time was also not-so-stellar because stroke tends to be more effective for pool swimming than open water swimming. Namely, I have a long, slow stroke. This is fine for short course pool swimming, but I need to up my stroke cadence. Spent some time paying attention to that in the pool this past month and have had some success with increased speed.

I also finally got fed up with my heart rate monitor strap.

Once it failed during the run leg of this race, I finally admitted that it was time to get a new one. It’s been working beautifully and guiding me through workouts more effectively.

Perhaps most importantly, this race also showed me that I DESPERATELY needed a new bike fit. I had difficulties holding the time trial position for very long, and came off the bike to run with a numb right leg. Not OK. Five days after the race, I was in the bike fitter’s garage for an overhaul, and things have been much better – and faster – since.

All those changes added together to some nice improvements in training effectiveness over the month of May. Combined with two weeks of really intense training right after Monticelloman – think upwards of 160+ miles of biking, 35+ miles of running, and loads of swimming every week with lots of threshold work in each sport – these adjustments have me feeling pretty good about Sunday.

Sunday? What is Sunday?

I’d originally thought I could train to break five hours in a half ironman this year. I simply don’t think that is realistic at this point, but I do think I can put in a strong, solid race. Though it’s tempting to try to quantify “strong, solid race,” yet another thing I learned at Monticelloman is that staying focused on the task at hand, rather than panicking over splits and time goals, results in not only a better outcome, but also a much more enjoyable race experience. The bike course at Monticelloman included a net uphill in the first 15 miles, which would have had me frustrated with my average speed had I been laser-focused on a time goal. Instead, I was maintaining a wattage cap, getting hydrated, and staying engaged and positive throughout the race. In the end, I pushed at a good effort level, which resulted in a decent time, as it kept me from simply giving up due to a perceived poor performance mid-race.

And more importantly, I wasn’t miserable. So I’m going to stick with that approach, because there are so many factors that impact triathlon times – long swim courses, currents, windy bike courses, high temperatures on the run – that you just can’t account for in estimating your time. I have an idea of about when I might be finishing up each leg, however, the main goals are process based.

Swim: Swim fast, Swim hard, Swim focused. And for the love of the Flying Spaghetti Monster, stay on course.

Bike: Stay hydrated, Stay aero, Stay positive. 56 miles is a long way if you're digging yourself into a psychological or physiological pit. And stay aero, because that will help you get to the run faster with minimal additional effort.

I do have one time-based goal: finishing in under six hours, because that is when it’s going to start getting really hot, and I don’t want to be out running on unshaded blacktop when that happens. I'd rather be sitting down in the shade at that point.