2013 Nation's Triathlon: About Time for A Race Report, Eh?


Hm. A little over a month post-race, maybe it’s time for a race report?

My triathlon season is over, and it’s been a long one. Starting with a February marathon and rolling right into an April half ironman before launching into ironman training made it a long trek, and while it would have been completely reasonable to call it done after Ironman Mont Tremblant in August, I’m not a reasonable person. I instead signed up for Nation’s triathlon, and Olympic-distance race close enough to home that I can bike to and from the race site, three weeks after the ironman.

This is generally a really bad idea, but I had a mission, and that was to place in the top 10% of my age group so that I could enter 2014 Age Group Nationals. All I had to do was recover from an ironman, pick up some short-course speed, and reset for an Olympic-distance race. Three weeks is plenty of time for that ,right?

But it was worth a shot, and so I did a few harder efforts on the bike, a little bit of running speedwork, and splashed around in the pool in the in between time, and showed up ready to give what I had in an effort to nail that top 10% goal.

It worked. Two hours and 44 minutes got me 20th out of 209 participants in my age group. And here’s what happened in between.

Most of the triathlons I compete in are smaller – a few hundred participants – and I prefer this not only because it gives me a shot of making the podium in, or even winning, my age group, but also because the logistics are rarely complex. Transition is small, and there aren’t a million swim waves, so we all start within about 10-15 minutes of each other. Observe: an illustration of a typical 200-300 person swim wave setup. 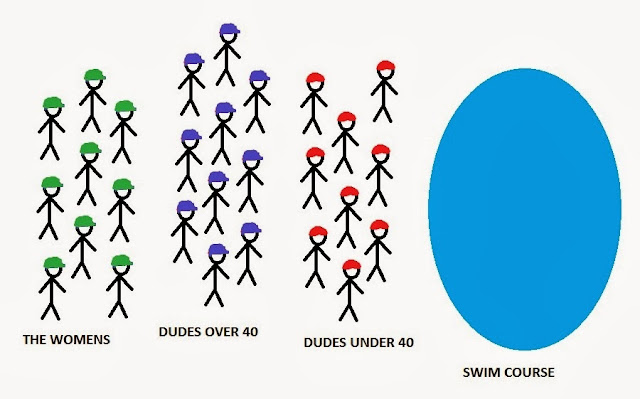 Nation’s, on the other hand, had about 4000 participants, so there were more waves than I could count, and the “waves” were actually entering the water in a time trial format, meaning that the waves lined up and were then directed into the water seven at a time. The timing mats caught our entrance time, so we all got a fair shake at the course, but there was no way of knowing where your age group competition was throughout the race.

Plus, it was a zoo for the 2+ hours we had to wait for our wave to start. 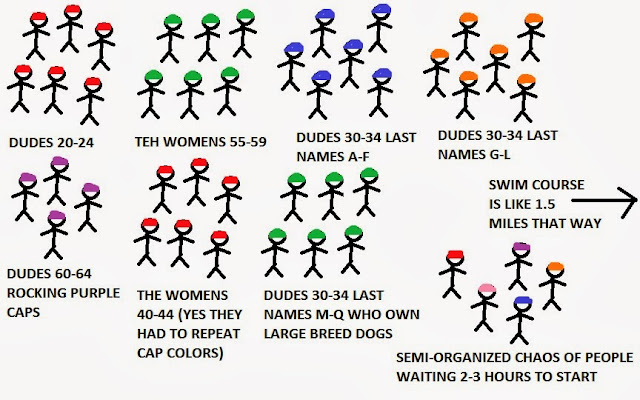 The temperatures continued to climb as we waited, which made me unhappy about the run conditions we’d be facing – most of the run course is on unshaded blacktop, so 85F temperatures are far from ideal.

But first, we had to swim and bike before enjoying that run course. Finally, it was time to start

I jumped in toward the beginning of my wave, and took off away from the other six women who jumped in with me. I felt OK swimming – not great, but OK. Sighting on the course was extremely easy, with buoys every 100 meters marked with the course distance (note: why is this not more common?), and I didn’t run over TOO many people from earlier waves because we entered the water spaced so far apart. I could tell I was passing a lot of people in many different colored caps, so I was definitely moving alright out there. Maybe I could have been a little faster, but it’s not much slower than my pace at other races this season. Given that my swimming volume and intensity started tapering down in early August in anticipation of Ironman Mont Tremblant, and further given that I didn’t really ramp it back up before Nation’s, I can’t complain.

This included taking off my speedsuit, which offers a huge drag reduction over the tri top pockets, and put me 463rd out of all 4000-some people there. What were other people are doing in T1? Having a picnic?

I had my power and heart rate displayed on my bike computer for information but didn’t have a target, other than an upper limit on both that I was pretty sure I’d have no chance of approaching. My normalized power was pretty low for an Olympic distance effort, and barely broke 150 watts. I expected that based on how I’d felt the week before the race. Eventually, my heart rate started falling, too, so clearly my effort wasn’t up there, either. Maybe I was just getting bored, maybe I was too busy trying to pass a few hundred people while avoiding potholes and other road hazards. Most of the roads were wide with plenty of room for passing, but it was still pretty crowded, especially for the first loop.

Though the second loop was thankfully less crowded, it was getting hotter and hotter. I kept getting in fluids and salt in anticipation of that run coming up, because I was going to need to work the run to make up for my less-than-awesome bike leg.

My legs felt OK coming off the bike and just ran at the pace I thought I could hold given that it was hot and sunny.  I didn’t get mile splits or watch my heart rate during the race, but based on how my average pace looked, I was fastest the first mile and slowest the last mile – I definitely slowed down a lot near the end. Probably accumulated fatigue from that ironman thing.

Mentally, it was a lot harder to hold that pace than it should have been . There were LOTS of walkers on the course thanks to the huge split in wave send off times, and subconsciously, I would see somebody else walking and think “Oh, it’s OK if I do that, too.” But, this was just a 10k, so I didn’t need to walk through aid stations, nor were there hills to walk.

So I imagined that I was on a treadmill, with no option to walk or slow down. It worked, and I kept moving along. My legs were shot for the last mile, and two women in my age group passed me in the last half mile. It turns out that they had started before me and I placed ahead of them anyway, but I lacked the physical and mental strength at that point to push ahead, which is something I need to work on in the future.

I was pretty spent when I crossed the finish line, and sat down in a chair nearby. Apparently, that made it look like I wanted medical attention, but I assured the folks in the medical tent that I’d just promised myself back at Mile 4 of the run that I would sit down ASAP. Can’t break promises to myself.

I scooped up a bottle of water, and started wandering over to the finisher’s celebration area. A big deal has been made about how the race ran out of medals for later finishers, but I didn’t even notice that I didn’t get a medal until I saw others walking around with them. This illustration of the finisher’s area explains why. 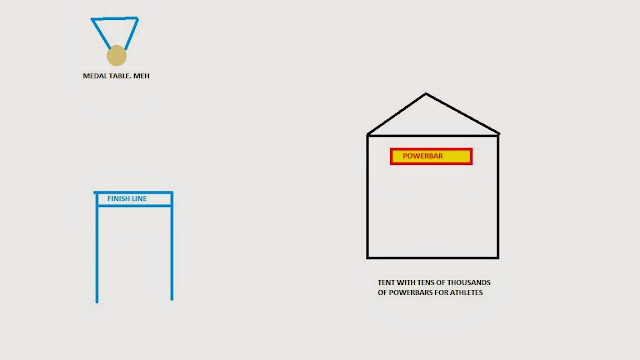 I found my way over to the timing table, and found my placement, which I knew was probably good for an Age Group Nationals qualification slot, and then happily packed up my gear and biked home.

I mean, it was only about 5 miles. Not worth worrying about parking.

Finally, there’s one nice thing about waiting so long to finish up this race report. Besides the great illustrations.

It’s for sure. 2014 Age Group Nationals in Milwaukee. I even registered.
Posted by Victoria at 6:15 AM