I Do Want to Write About It. Eventually.

It's not that I haven't been training - because I have, though it's been pretty laid back since I raced Nation's on September 8.

It's not that I don't have any upcoming races - because I do, though they're all shorter races until Spring 2014.

And it's not that I don't want to write about Nation's - because it was a good race, and I did what I set out to do.

It is, however, the mountain of work that hit me in early September and hasn't let up yet. I've been running all over the east coast, meeting, running meetings, and churning stuff out on my laptop at all hours of the day. When something had to go, blogging about the unfocused, relaxed training I've been doing from time-to-time winds up being a pretty low priority.

As a small consolation, I did get a nice prize at the office in recognition of some of the work I did. 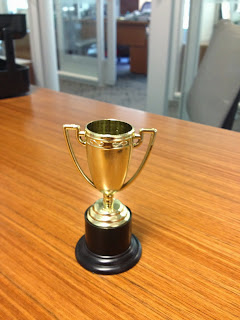 Yes, it's plastic and about 4 inches tall. And I love it.
Posted by Victoria at 6:54 AM