Racing in the middle of Ironman training can be dangerous. Not just in the sense of the potential to get injured, wind up in a pit of fatigue, or get into a season-ending bike crash when some dude bombs down a technical descent on the bike course way too fast. But also in the psychological sense, given that the deep levels of exhaustion you can reach while training for an Ironman week in and week out can leave you flat in any race you go to. Last year, I raced the Culpeper International Triathlon just three weeks out from Ironman Louisville, and only five days after returning from a big training weekend and course preview in Louisville. It was not exactly a stellar performance, but it was important to get out there and into racing mode one last time before the big one, and I went in totally prepared to feel very slow, so I shook off any doubts raised by the lackluster performance by the time I packed my car up at the race site.

The Diamond in the Rough International Triathlon last weekend was going to be pretty similar. I went in knowing that I’ve made some fitness gains, but also knowing that most of those gains were reflected in my endurance, not so much my speed. The idea was to get in one more race before Ironman Mont Tremblant so that I wasn’t rusty on August 18, and this was definitely not a target race. Though prepared to handle almost any result, I was still hoping for a pretty good day, and based on past results, I knew I could place near the top of my age group. That would be a nice mid-season treat, now wouldn’t it?

For the first bit of July, I was feeling great in training. Fast in the pool, efficient on the track, powerful on the bike. Even in the face of the oppressive heat and humidity that is DC’s summer signature. I was looking forward to an awesome race all week.

Then, on Friday, I got kind of sick. Similar to what happened at the end of June while I was in California, just not as severe. I did my best to rehydrate with Nuun and settle my stomach as quickly as I could, but it can be hard to catch up in the hydration game. There was no point whining to everybody about this, as that would only make me focus on the illness and dehydration rather than the task at hand. Besides, one of my best swim championship tapers came after a week of bronchitis, so I knew that my body could come back, and come back strong.

I woke up Saturday feeling OK – not great, but OK enough to race – and we drove over to the race site, where we were greeted by a park full of mud thanks to the rainstorms the day before. After almost losing my shoes walking through the mud, I got all my gear set up, sipped on more fluids, and waited for the swim start.

Swim (1 mile): 24:56 (official), 23:40 in the water (1:21/100 yards).  We lined up for the in-water start, and when the horn went off I tried to latch onto the feet of the woman who I was pretty sure would win. This worked for about 100 yards before she took off at something like 1:08/100 yards. After that, I just swam hard – mentally, I approached it like the effort level I’d put out in a 500 free in the pool – and this seemed to be just about right. I had an easy time staying on course thanks to the FINIS surge polarized goggles I’ve been using for open water swims, and knew that I was near the front of the women’s race. 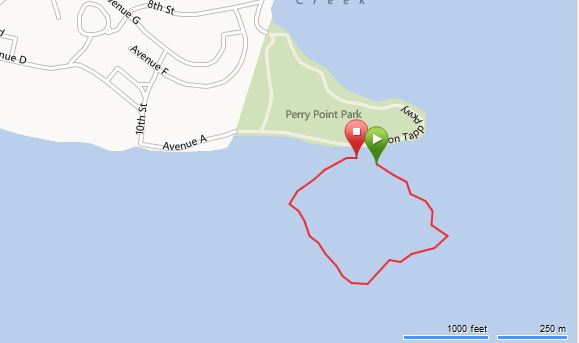 (Some of the imperfect lines are thanks to satellite inaccuracy, some are due to not being exactly on the buoy line, but I never strayed far and was happy with my efficiency on the swim.)

I wound up coming out of the water as the third woman, checked out my time leaving the water, and was very happy with 23 minutes for a one-mile, non-wetsuit swim.

Then, it was time to run up about 40 steps (yup) and over to transition. 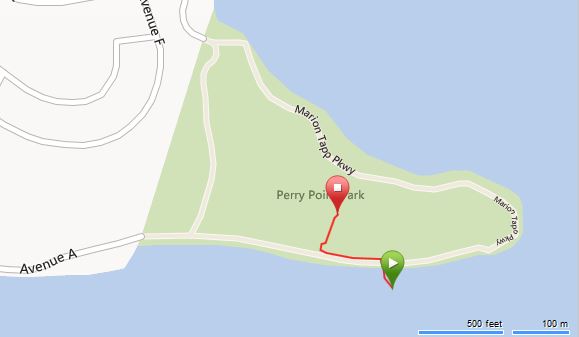 Now you see why I lapped my watch coming out of the water to capture my actual swim time. It was pretty far.

T1: 1:13. As I ran from the steps to the transition area, I passed no fewer than four men who were sauntering over towards their bikes. This is a race, folks! At least the path was wide enough that they weren’t blocking anybody. Once I was at my bike, I got on with everything and ran towards the mount line to start the bike and see what my legs had in them for the day.

Bike (27 mile): 1:38:54 (16.5 mph). I hopped onto my bike pleased with my swim effort and placement, and was ready to bike with some tempo-level power and hydrate to set myself up for a good run on a hot and humid day. My heart rate stayed high for the first 20 minutes out of the water, but this is normal for me, and I didn’t worry, just put off taking in fluid and nutrition until it settled because I know that doing otherwise can cause issues.

My power, however, was a little concerning. I was able to keep it right around threshold level for the first climb during miles 4-5, but after that, struggled to keep myself in the target range. This was even a problem on the flats, where I usually have no trouble at all dropping into the aerobars and hammering away for ages. My legs just didn’t have any pep in them, and I felt very flat. I wound up averaging 158 Watts normalized, which was lower than my power for the half ironman in Charleston in April. I think part of that is because I was dehydrated going into the race, and part of it is just accumulated fatigue from training. It was still discouraging to see such low power numbers, even though I was relatively happy with my average speed and handling of the hilly, technical course.

It was also discouraging to watch so many people pass me, but I tried to focus on my own race and knew that many triathletes have a tendency to overbike and then blow up on the run, which was NOT what I wanted to do. I focused on getting in my hydration and setting myself up for a good run, and not letting myself get bothered about how everybody else was tackling the course.

Except for the peloton of five women that passed me at mile 24. That definitely angered me, as there was no excuse for that 24 miles into a hilly, technical, one-loop bike course with 227 participants. It was clear that they were drafting deliberately at that point, which not only benefited them on the bike, but also likely helped them start the run with fresher legs. Since the officials were nowhere to be seen at that point, they weren’t penalized, but I supposed they’ll have to live with the knowledge that they didn’t race fair on Saturday.

T2: 1:30. I was hoping that after putting out so little power on the bike, I’d be in store for a good run, so I was excited to put on my run shoes and get out of the mudpit that transition had turned into.

Run (5 miles): 43:15 (8:39/mile). I started off the run in the low 8s, which is where I wanted to be. Soon, I found that I was having trouble holding my form - my shins hurt, my right IT band was aching, and then my legs got really tight and I started slowing down. And about a mile and a half in, I started having trouble breathing. It didn't feel like an asthma attack – more like I’d swallowed something that didn’t quite go down right – and I felt like I was fine to keep running. I was just in a lot of pain and breathing a lot faster and shallower than I should have been. A couple of women passed me, and I passed a couple of women, but I still hadn’t seen anybody in my age group, save the lead overall woman, so I kept pushing as much as I could under the circumstances, resisting every urge to stop and stretch or walk because I feared never starting again.

For the last mile or so, I felt like I was just about maxed out, and looking at my heart rate data after the race, it seems like I was. It was frustrating that this didn’t yield a faster pace, but I know that I gave everything I had that day, because I crossed the finish line and was able to stand up just long enough for the volunteers to get my timing chip, and then I laid down for a few minutes before wandering over to the computer monitors scrolling the results to see that I had, in fact, won the Women’s 30-34 age group.

So that was cool. 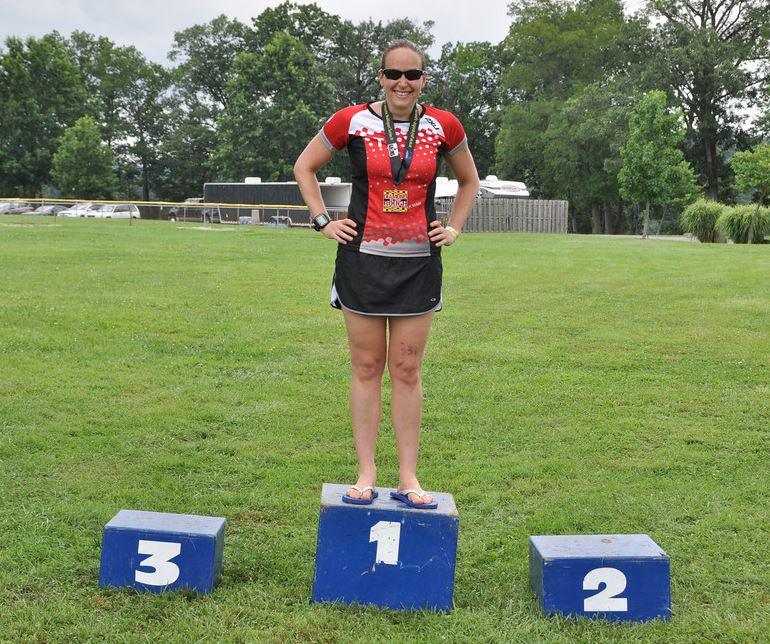 (I promise, there were actually other people in my age group, but the 2nd and 3rd place finishers apparently weren’t around for awards.)

Overall time: 2:49:51. I wound up 23rd out of 79 women, which is a little lower than I’d liked to have been. I feel like, on a great day, I could have been 5-10 minutes faster. But it wasn’t really a great day, it was an OK day that I went into a little sick/dehydrated. I’m not really concerned that this indicates that I’m lacking fitness going into Ironman Mont Tremblant, as I’ve had plenty of good training sessions that indicate everything is going fine. I’m just a little disappointed that race day wasn’t a better day, but, there’s no time to dwell on that.

After all, there are only 32 days until Ironman Mont Tremblant.