I’m just now getting around to posting last week’s training log, as I spent the early part of the week sort of sick and sort of zombie-like from exhaustion. This hits me in early- to mid-March every single year. My work travel schedule for January and February is always jam packed, and the team I coach has several meets in this time period, capped off with a four-day meet against all the teams in the entire southeastern United States in early March. My body holds it together through the end of that meet, and falls apart about 10 hours later.

Well, last weekend included that meet, and, as usual, I was wrecked Monday morning. But before that happened, I got to see our team take third overall AND see one of our swimmers take the Athlete of the Year Award. Just so that we’re clear on this, she was picked out of all those swimmers there from Texas, Florida, Virginia, North Carolina, etc. It’s a pretty big deal.

As is the silver medal that these folks took home – yes, really, second place out of our entire section of the U.S.

I feel like this is a legitimate reason to be posting my training log a little late this week. If you disagree, well, I challenge you to do the routine in the video. Please report back.

Tuesday: In the morning, a 5.65 mile run with a 20 minute tempo effort (7:58 pace) and 50 minutes of strength training. In the evening, 4000 yards of swimming with DCRP Masters, including good chunk at 1:15/100 yard pace. It’s a pace I expect to see a lot more often, since I’ve decided to shove myself into the fastest lane to prevent laziness in the pool.

Wednesday: A 5 mile “track” workout done on the treadmill because of ice (which later turned into rain, but I digress). Two miles at half marathon goal pace (7:53), one mile slightly faster (7:47).
Amanda showed up next to me about 5 minutes in; it was great to not be completely alone for it.

Thursday: A 1:15 bike trainer workout, including 45 minutes at tempo effort (159 watts) early in the morning, before leaving for the airport at 6:30 am to fly to San Antonio to coach a meet.

Friday: Another early morning to get the work in before the athletes needed my attention: 45 minutes of strength training and 3700 meters of swimming (in a hot pool) before 7 am. Followed by 10+ hours of judging and coaching in a hot pool area.

Saturday: Competition called for an even early start to the day, so I was on the hotel treadmill for 7 miles before 5 am. Ran 4 miles easy and slowly built up to 8:40/mile, then finished out the last half mile at 8:24/mile just to get off the damn thing.

Sunday: Should have involved a spin bike workout, but the meet schedule and gym operating hours didn’t mesh to make that possible, so I switched this to my rest day with plans to do the bike workout on Monday (normal rest day) instead. Before we left Texas, the kids put up a pretty good haul. 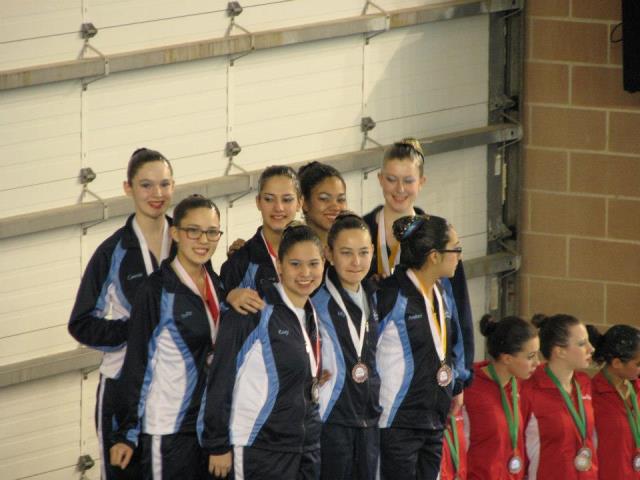 (That’s them on the 3rd place team podium, along with their medals for other events, too)

It was worth adjusting my training schedule. Without a doubt.