I don’t know what most people think of when they hear “Thanksgiving,” but for me? “PR Opportunity” is what comes to mind immediately. Turkey Trots are a fun tradition for many on Thanksgiving day, and what could be more fun than a new PR?

But what DISTANCE to PR? In the DC area, there are dozens of Turkey Trots to choose from, and debates about which race would be best took place throughout October. A flat 5k? No, a 5k is painful. A 5 miler? No, no, I did that one last year. Finally, a group of us settled on the Turkey Chase 10k in Bethesda, and gathered in the crisp morning air ready to take part in the 10k or 2 mile race. 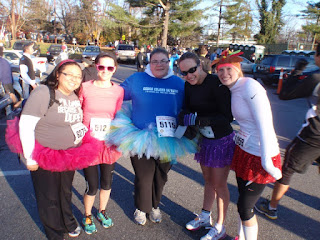 (Cat, Rachel, Sarah, me, Sarah. With Jason behind the camera.)

Based on some of the speedier track workouts and tempo runs I’ve had in the past two months, I was shooting for a sub-50, which sounds extra ambitious given my official 10k PR of 54:24. However, I did manage to split a 53:50 10k on the way to 13.1 mile in Richmond 12 days ago, so my 18-month-old official PR is clearly not representative of my current fitness level. Even after pleading my case to my coach, she argued that a goal of almost 4 minutes off my fastest time was overly ambitions less than two weeks after a half marathon, and I finally settled on a new set of goals: sub-50 would be awesome, sub-52 would be a-ok.

And she made that case prior to checking out the elevation profile.

Ha. For anybody interested, it’s almost as much climbing as the famed Columbia Triathlon run course. In other words, not really a great chance to put up your fastest time.

Challenging hills and all, I wound up crossing the line in 51:25, solidly inside the “a-ok” range, and felt like the effort would have been close to a sub-50 on a flat course. After the race, we whined extensively about how relentless the hills were and laughed about wildly inconsistent splits. 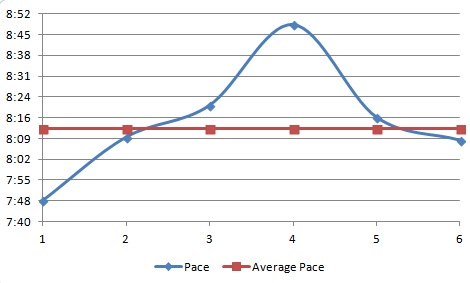 Looking back later, though, I don’t think I mis-paced it, since I closed the last two miles only slightly slower than the first two, which included a lot of downhills. And in another positive development, the shin pain I experienced during the Richmond Half Marathon was nowhere to be found. The icing, foam rolling, and compression are working, and I'm ready to take on Project Sub-4 Hour Marathon this winter.