Sleeping in has never really been my thing. I rarely even need my alarm clock, and naturally wake up around 5:30 am (slightly earlier in the summer, slightly later in the winter).


However, forced wakeups much earlier than that are just tough. Nobody should have to wake up at 3:30 am for their workout. But life is full of "shoulds" and this week included multiple workouts starting before 4:30 am. Why?


Because two of the swimmers I coach kicked ass at a meet in March and qualified their duet for Junior Nationals - the most prestigious synchronized swimming meet for 15-18 year olds in the country, and the meet where the junior national team selection process begins. 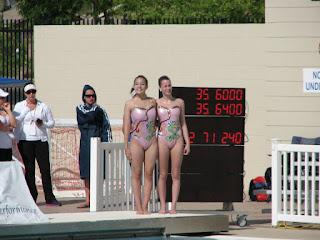 Seriously awesome stuff. Neither of them ever thought they'd be there, but they were, and they had an outstanding swim that left them finishing....NOT LAST. They were positively giddy afterwards. It was worth it - even the long trip out to Phoenix and the redeye home.


And even the constant early training mornings.


Monday: Rest day, used to pack for Junior Nationals and pull together all my work before I left for the meet.
Tuesday: 50 minutes of steady spinning on the bike trainer, starting before the morning news, my standard trainer ride entertainment, started. For the record, the morning news – on the station I watch, that is – starts at 4:45 am. After heading out to DCA to meet with the team before 7 am, I squeezed in 20 minutes of stretching and foam rolling at the gate.
I’m a lot of fun to travel with, and not remotely embarrassing.
Wednesday: With no other suitable time to run, I hit up the treadmill at 4 am for a 50 minute run of 5.15 miles. After the kids finished their awesome competition day, I squeezed in the half hour of dryland on the plan.
In the hotel room I was sharing with three swimmers and two chaperones.
Have I mentioned how much fun I am to travel with?
Thursday: Kind of a continuation of Wednesday, given the redeye flight through Atlanta with a 3 hour layover. I stumbled home on the metro and headed to the pool for 2500 meters of swimming before joining in on several work teleconferences in the afternoon. Cue crash of exhaustion at 6 pm.
Friday: Another pre-6 am workout, this time a one hour trainer ride that was deferred thanks to the Thursday evening collapse. In the evening, I got to run with Doug in the Crystal City 5k, where he struggled with back pain and did away with the time goal I was supposed to pace him to. Even so, it was a nice easy jog on a beautiful evening with good company.
Saturday: A group ride with a bunch of coach’s athletes, conquering some climbs that killed me last summer when I did them with Lauren, Beth, and Tim.  Angler’s Hill? Nothing. Great Falls Road? I’m on it. 25 miles later, I averaged around 16.1 mph and covered some nice hills in that.
Also, we apparently biked into the Potomac River. 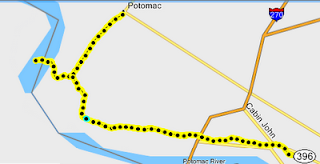 A 15 minute brick run at 9:23 pace followed – which is relatively fast for me, especially after steep hills. This bodes well for Columbia next month.
Sunday: A 4000 yard swim. The distance still feels easy, I’m just not as fast as I once was. So it goes.
Worst part of the week: Attempting to sleep on a bench in Atlanta. Or running on a treadmill at 4 am. Hard to say.
Best part of the week: Owning the climb on Great Falls Road. I wasn’t even tired at the end.
Posted by Victoria at 10:38 AM