While everybody handles race recovery differently, I’ve suspected for a while that I’m abnormal. After longer races – half marathon, marathon, Olympic-distance triathlon – I’m wired and energetic, but after shorter ones – 5k, 5 mile, 10k – I’ll usually get home and collapse on any available horizontal surface for a few hours. Given that history, I was anticipating not being too tired after the half marathon last Sunday.
Wrong. Not only was I tired, but I wound up picking up the first cold I’ve had in years and even skipped an optional swim session in my training plan. When I skip a swim workout, you know that something serious is going on. My suspicion is that the rougher post-race recovery was due to the fact that for this half marathon, I was really pushing for a time goal and racing hard, rather than trying to hold back to ensure a finish like I had during other races over 10 miles. This would explain why I USED to be more tired after shorter races: I could push in those because I knew I could finish a 5 miler, so I did a number on my body. Now, go with that for 13.1 miles, and suddenly you need a lot more rest the next week.
The PR was completely worth it.
The other complicating factor in training this week, aside from the cold and post-race fatigue, was the fact that the team I coach had a big meet Friday through Sunday. When I say “big” I mean that swimmers came from Florida, Texas, North Carolina, Virginia, Maryland, and everywhere in between. The meet is a qualifier for junior AND senior nationals, so there’s some top-notch competition, including a few swimmers who have finished in the top 8 at junior and senior nationals. So when I normally would have been out on a long run, I was instead watching this. 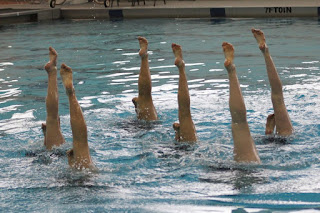 No, it’s not as hard as it looks. It’s harder. And don’t even think of asking whether or not they’re using the bottom of the pool, because they aren’t. The pool is over 12 feet deep in most spots.
Luckily, we were hosting the meet in DC this year and didn’t have to travel, so I had free time to get in a good chunk of training, fatigue, sinus congestion, and 11-hour days at the pool be damned.
Monday: 5x500 recovery swim. Didn’t bother looking at any of my times.
Tuesday: 1 hour easy spin on the trainer in the morning. Skipped optional evening swim in favor of laying in bed for a few hours because putting on socks sounded too difficult.
Wednesday: All day ab work out, focus exercise: coughing. Rest day otherwise.
Thursday: Early morning interval session on the bike trainer. 75 minutes of spin ups and stuff. More coughing.
Friday: 11 hours of on-deck coaching and officiating, which means yelling so that people can hear you over everything else going on. Combined with the coughing, this means I didn't have much of a voice left by the middle of the day. 3000 yard swim after the end of competition with times that were much faster than they should have been given the circumstances.
Saturday: No voice. Coach all day. Run 45 minutes easy in the evening to decompress.
Sunday: Get to the pool at 6:45 am – that’s Daylight Savings Time, so it felt like 5:45 am – for finals for our meet. I only let our kids take pictures with me if they win an event at a zone meet. So, here’s what happened. 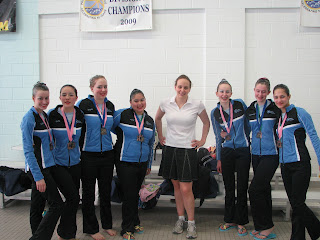