As mentioned Monday, I managed to meet one of my top 3 racing goals for 2012 on Sunday at the B&A Trail Half Marathon when I crossed the finish line in 1:59:04 – just under two hours. But what’s a race without in-depth overanalysis afterwards?
Nothing. So let’s start from the (early) beginning. 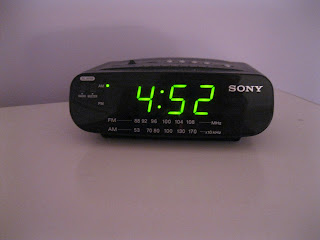 With the race an hour away in Severna Park, MD, we had to leave no later than 5:30 am. Doug, who wanted to come be top cheerleader at the race, was not exactly happy about this but didn’t complain one bit.
He did complain after I took this surprise picture in the elevator down to my car. 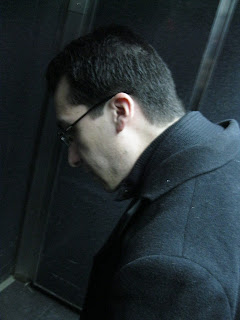 “That’s not going on the blog, is it?”
After driving up I-95 for a while, we found our way to Severna Park High School for packet pickup and ran into Sarah and Carly. 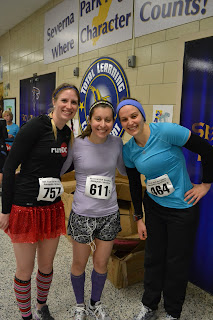 We camped out in the warmth of the school, made use of the plentiful restroom facilities throughout the school, got our gear/hydration/etc set for the race, and then made our way to the start line while our support team - Doug and Jason - got in position to cheer us on. 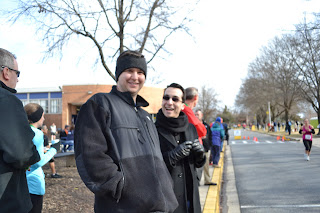 Incomprehensible chatter from the announcer that was hopefully not important.
Starting horn for the race. Super fast people at the front take off.
Shuffle towards the starting line with the rest of the field.
And go. 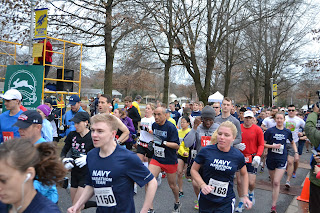 We took off through some neighborhood streets for the first mile or so, which helped thin out the field before we hit the relatively narrow B&A Trail. I was going at what felt like a strong and sustainable – but not really easy - pace, and figured I was a little below goal pace of 9:00/mile.
Mile 1: 8:56
Yup.
Now off to the trail itself – the flat part.
Mile 2: 9:02
It’s worth noting here that while I was racing with my Garmin, I used the same approach I did at the New Year’s Day 5k – set the screen to read “sunrise time” so that I had no temptation to constantly look at it during the race, set up auto-lap by mile to help collect data, and only glanced at the mile splits for information. Cristina, who I may or may not have a running-related crush on, already explained the benefits of this approach for those of us who want data for evaluation after the race, but don’t want to be constantly freaking out about our pace, time, and distance covered during the race.
However, it turns out that it is far easier to maintain discipline on keeping that screen set to sunrise time during a 5k when pacing strategy is less of a factor than it is in a half marathon. With a simple press of one button being all I needed to do to see my average pace for the race, I foolishly started checking it out after mile 2.
Mile 3: 9:05
So much for maintaining that sub 9:00/mile pace. Can I get back there? Let’s obsessively click over to “average pace” every 30 seconds. At least it kept my mind off my nausea – which I almost never, ever develop during running.
Mile 4: 9:14
Screw it, I’m just going to relax and run. I’ll probably vomit in the next few miles anyway.
Mile 5: 8:59
Maybe checking average pace over and over actually wasn’t helpful.
Mile 6: 8:55
Yep. Stupid. Leave the screen alone.
Mile 7: 9:03
Check the average pace just after the halfway point – just one more time, just a check in, really – and see a 9:03 average. Still on target for that sub 2 hour finish with a bit of a cushion, even with this upcoming hill.
Mile 8: 9:27
Hill done. Time to settle back into the strong, sustainable pace and then start stepping it up.
Mile 9: 9:12
That pace settling took a little longer than it should have. Hey, since checking my average pace was so helpful earlier in this race, let’s look again!
(9:05. Sub 2 hours can still happen, but seriously, leave that dumb screen alone already.)
Mile 10: 8:57
Time to kick it up and run a solid 5k.
Mile 11: 8:51
Nausea returning. Probably sped up too early. Whatever.
Mile 12: 9:06
I will not look at my average pace will not will not will not…Oh look it’s now fast enough that I could go just under 10:00/mile pace and still finish under 2 hours.
Mile 13: 9:02
The race clock reads 1:59:20 something. GO. 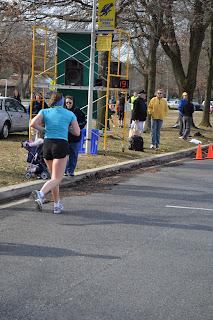 
Cue controlled collapse just past the finish line. No I do not need a medic, I need to lie down. But thanks for asking. 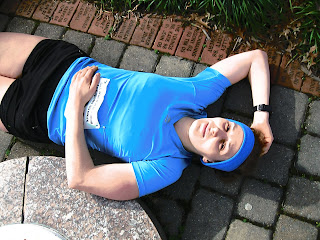