This week I did something I’ve been unable to do for months. Many months.
I swam fast. Not really fast, and certainly not nearly as fast as when I swam in college – and I wasn’t even that fast then. But I did swim faster than the week before when I had the miserably slow and all-around terrible swim session that I officially titled the “I Hate Life” workout before I went on a business trip.
The one insight I did get from the “I Hate Life” swim workout was that after I started missing my goal times, I just gave up - yes, I’m a lame wimp, I know – and then found myself swimming faster. I realized that I was trying to turn over so fast that I locked out my shoulders, and when I gave up, I went back to my normal, efficient, smooth stroke. The challenge this week was to take that insight and combine the efficient technique with a little power without locking out my shoulders, and it seemed to work. On Tuesday, I did a few 100s in under 1:25/100 meters (long course), which I haven’t done for a while, and on Saturday, I broke out a couple of 50s at around a 1:10/100 yard pace – a pace that I literally haven’t seen in practice in years.
I also ran fast. At times, faster than I was supposed to. On Sunday, I did my last long run before the half marathon coming up this Sunday, and was supposed to go easy - no faster than 9:30 pace. The route was uphill out and downhill back, so I figured a little extra effort on the first mile was appropriate. Then I saw a 9:11 pop up on my Garmin when it lapped for the first mile. Tried to slow down – 9:20. So on and so forth. On the downhill return, I just gave up and ran – it all felt easy anyway. In summary, while trying to do a run at an average pace of 9:30 or slower, I did every single mile faster than 9:30. That adds up, right?
Er…wait, I think I learned something about this, fundamental theorem of calculus or whatever.
Like I keep saying, someday, I will learn how to listen. Today is not that day. But hey, I DID (mostly) listen to the training plan, and here’s how that went.
Monday: 4ish pretty easy miles in the morning with no watch, followed by a 4000 meter swim with a long aerobic set in the middle, where I was creeping towards a 1:35/100 meter pace in that dreaded long course setup.
Tuesday: A 1:10 speed session in the pool in the morning. I used a 2:10/100 meter send off interval to knock out a bunch of 50s and 100s at 1:24-1:28 pace. Can I swim fast again? Is this a fluke?
I added a CXWORX core conditioning class and 10 minutes of upper body cable strength training to the schedule in the evening.
Wednesday: An hour on the bike trainer at an ungodly hour of the morning (read: starting before 5 am), with single leg drills and interval work. Followed by an all-day meeting with electric utility people in DC and an evening flight to yet another meeting in Florida.
Thursday: It turns out that our meeting was in a desolate, suburban wasteland near Tampa, so there was nowhere to run outside. Well, here we go. 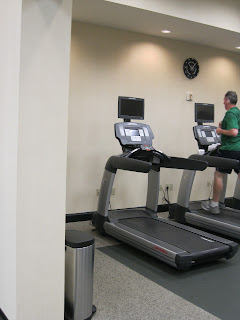 At least it was a speedwork morning. I had a 3200 building from race pace to threshold (17:32), a 1600 building from race pace to threshold (8:41) and 4x800 treshold (3:56-3:53-3:54-3:55). It was about 7 miles with the warm up and cool down added in, and with the intensity of some of the threshold work combined with the poor circulation in the hotel workout room, my hair was soaked in sweat by about halfway through the 3200. I was still evidently flushed an hour after finishing, because people in my meeting were asking if I was OK.
Air conditioning, people. It’s necessary, especially around treadmills in Florida.
Friday: Rest day – I’d contemplated going to the pool Thursday night for some extra swim action given this upcoming rest day, but instead I collapsed in my bed and took a nap from 5-7 pm. Tired much? I was still kind of beat Friday and it was nice to sleep in until 6 am (nuclear energy people like to start work – and their meetings – early).
Saturday: A sort of fast swim workout, with some 300s pull down around 1:20/100 yard pace. And some 50s at :36. This is not bad. Followed by 45 minutes of weights and 10 minutes of leg loosening on the elliptical.
Sunday: A 2 hour and 20 minute reverse brick, starting with the way too fast 7 mile run (9:10 pace), and finishing with 20 miles on the bike – both on Beach Drive. The victory here was staying in my aerobars most of the time – even downhill, even on sharp curves, and even on downhill sharp curves. It wasn’t fast, but I don’t care, at least I’m no longer scared of my new bike. Wrapped up with 15 minutes of easy pool running in the afternoon.
Worst part of the week: Nothing bad workout wise, except the inevitable crash on Thursday night, which was more attributable to work overload than training.
Best part of the week: Swimming fast again – finally. Or maybe doing my long run at a good pace, even if it was faster than it should have been. But hey, what’s 20 seconds per mile between friends?
Posted by Victoria at 10:32 AM