As much as I enjoy the work I do in support of the sport of synchronized swimming – both coaching and working as a national-level judge – it sometimes cuts into my ability to enter races that look appealing. For example, the weekend of the Kinetic Half, which would be an awesome prep race for IM Louisville, I’ll be in Charlotte coaching my swimmers at a meet. And the weekend of both the Shamrock Half Marathon in Virginia Beach and the National Half Marathon (or whatever it’s called this week) here in DC, I’ll be judging collegiate nationals in Florida. This is particularly unfortunate given one of my major goals for 2012 – running a sub-2 hour half marathon.
Luckily, I found a meet-free weekend at a good point in my training cycle to give this a shot, and also found that the B&A Trail Half Marathon was scheduled that weekend. Which happens to be this weekend. Now, before you get all giddy about how much you love trail running and how much fun I’m going to have, this is NOT a trail race – it’s a race on some neighborhood streets, but mostly on the B&A Trail, a railroad-grade (read: flat) paved bike path. In other words, this is probably not a challenging course. In fact, the description says that there is “a hill at mile 7.” Not a steep hill, not rolling hills, but “a hill.”  So not only does it fit in my schedule, but it sounds like a good race for a somewhat aggressive time goal.
After picking a good race, I had to, well, train. And specifically train for the sub-2 hour time goal. I’ve talked about some of the time goals that my coach outlined in support of this goal, and may or may not have obsessively evaluated my performance against those. And of course, I used every runner’s favorite tool for evaluating progress towards race time goals: the McMillan Running Calculator. I know that some people go run their equivalent race times the minute they get home from a race, but I am not one of them.
I look it up on my phone before my heart rate has finished slowing down post-race. 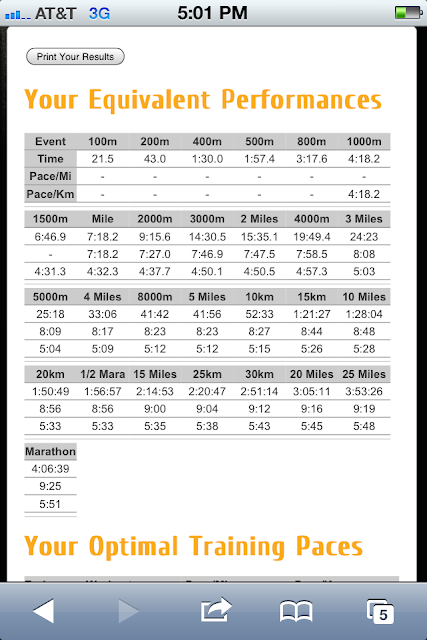 Reasonable. Totally reasonable.
The above screenshot shows the times that are equivalent to the 25:18 I ran at the New Year’s Day 5k. Note the 1:56:57 half marathon time prediction. Encouraging, yes? Especially since my track workouts, tempo runs, and long runs – hell, even my warm ups – have gotten quite a bit faster since then. But a conversion of equivalent race times isn’t exact science. Far from it, particularly when extrapolating from a shorter race distance to a longer race distance.
You know, like from a 5k to a half marathon.
The times you do before race day, while informative about your progress towards a race time goal, aren’t a perfect predictor of how race day will go. I have done could do a comprehensive evaluation of my time improvements in track workouts and long runs, and do a multivariate regression analysis of my previous half marathon times against intervals and long run performances leading up to those races. That exercise can be confidence-building in advance of race day, but ultimately, I have to go out on race day and run 13.1 miles at an average pace of 9:09:61 per mile or faster.
I think I can do it. I finished last week’s long run, which truly felt easy, at 9:10 per mile pace. My threshold pace has dropped below 8:30/mile – much better than the 9-9:20/mile pace I was holding in the fall when I pulled out a 2:06 half marathon on a really hilly course. But I still have to show up on Sunday and do it.
And if I don’t do it? Eh. It’ll be disappointing, but it’s not the end of the world. There are half marathons within driving distance of DC almost every weekend, and I can go for this again this season. And really, it doesn’t matter if I do break 2 hours, because, well… 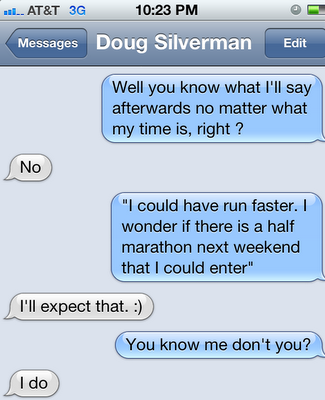 Basically.
Posted by Victoria at 12:42 PM