Post-Stress Fracture Life: Grow Gills and Bike Like a Mofo

Last time I wrote, I had a broken leg propped up on a coffee table and a bunch of triathlon registrations for April, May, and June were looking like a potential sunk cost. What a downer, right?

Eh, not really. I've been down the stress fracture road before and came back to finish 4th overall in a sprint tri just a few weeks after returning to running. Bones repair themselves, fitness can be maintained in the absence of running, and life goes on.

This deserves its own blog post that I have yet to write, but it's worth noting that in February, I switched coaches and started working with Brian Stover, who has put new meaning to the phrases "serious suffering" and "bike training focus." And while many people would be frustrated with an athlete that gets injured about a month into working with them, that's not what happened here. Instead, roughly 24 hours after I broke my fibula, we started on the "Aquabike Champion of the Universe" plan.

Or, as Stover put it, "grow gills and bike like a mofo."

I had several weeks where I couldn't bike above threshold, and all swimming involved a pull buoy, a braced ankle, and one-legged flip turns, but we worked with what we had. Lot of tempo/threshold intervals on the bike, furiously trying to catch up in the pool after each turn, and some physical therapy work to heal the leg faster took up the first few weeks. I was eventually able to swim and bike normally again, and finally got back to running come May. I'm up to a whopping 2.8 miles of continuous running (Amy Cragg watch out) and don't have any pain, so the rebuilding train is going full steam ahead.

In the meantime, here's a fun fact for you: the Virginia/Maryland Triathlon Series offers an aquabike option (swim and bike only) for ALL of their races. So those race registrations didn't go to waste. Instead, I got to test the success of the "Aquabike Champion of the Universe" plan.

First up was the Rumpass in the Bumpass Olympic distance race. Summary: got off course on the swim, mucked up T1 beyond any recognition including a humorous two minutes at the bike mount line, and just missed my target bike power.

The whole thing. Out of all the women and the men. 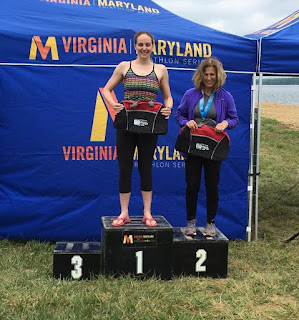 Next up was the Kinetic Sprint race. I'd hoped that MAYBE I could run 5k come mid-May, but my first few test runs featured a little soreness, so we took the conservative route and cut back the duration of my runs, so that wasn't happening. Aquabike it is!

The day was quite windy, and the water was choppy enough that by the time we were 100 meters in, I was thinking that this was a good day to be a strong swimmer. My time in the water was a bit slow, but I had a plan to unleash ALL THE WATTS on the bike course, which probably involved passing at least 300 people because the aquabike racers started last. That was a tad scary, but I escaped unharmed with a sweet bike split and another victory.

First, by five minutes, out of both genders again, of course. 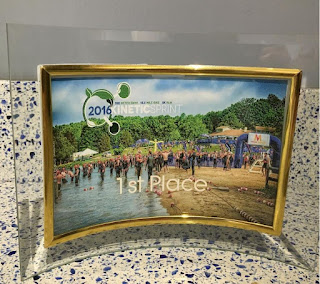 To quote coach after this race "I bet there are a LOT of aquabike dudes out there who can't wait for you to start running again."

TL;DR: Broken bones suck but they aren't the end of the world. Do what you can and you'll be stronger than you realize when you come back.