It’s been a while since I’ve gone into an event unsure of whether or not I’d finish. Even at Ironman Louisville, I knew that, barring a major mechanical on the bike, I’d be on the run course in plenty of time to walk the entire marathon and finish in under 17 hours. And now? Marathon? Yeah,no biggie.

But the Garrett County Gran Fondo was a different story. I know of really good cyclists who struggled to average better than 12 mph on the course. The hills are legendary, and it’s not just the total climbing (8000-9000 feet over 62 miles for the version I chose) – it’s the technical turns, frighteningly steep descents, and multiple-mile climbs with grades topping out around 20%. Since I’m terrible at climbing, it would seem like signing up for something like this would be stupid. And it is, except that I knew this ride would make the climbing for Ironman Mont Tremblant seem tame in comparison.

In other words, if I could complete this monster, I’d make a huge deposit in my confidence bank for August 18.

With that objective in mind, I lined up with the other folks signed up for the (appropriately named) Masochistic Metric, totally aware of the fact that this really might take me 7 hours, and rolled down the hill, er, mountain, to start the first segment.

The first little bit of this was terrifying at times, not because of the climbing I knew was to come, but because of the numerous sharp and blind turns on steep descents. I kept reminding myself of the objective – get strong and confident for Ironman Mont Tremblant – which I wouldn’t fulfill if I crashed, broke a leg, and couldn’t even make it to the start line in August. There was no need to bank a bunch of time here, so I let folks bomb past me and waited for the real fun that I’d signed up for to begin. We eventually hit some short, but steep, climbs, and I found myself actually passing people.

No, really. I passed people GOING UPHILL. Those of you who bike with me know how notable this is.

We hit the first major climb about 10 miles in. And towards the top of the hill, I saw people walking their bikes – something that Sarah had promised me I wouldn’t have to do.

That. That would NOT be me.

Sure, the grade was a little steep in spots and my cadence slowed to 40 rpm while I was in my easiest gear. But I would NOT walk my bike. Stopping to walk my bike would do nothing to build confidence going into Mont Tremblant – in fact, it would probably obliterate any that I had – and there was no reason to do it. Just keep turning the pedals.

I made it. Slowly, but I made it, and then cruised into the first aid station in just over an hour.

Funny how a net elevation loss of over 1500 feet does that.

I knew this had been the easy section, so I reloaded on water, got in some salt, and hit the road again, where I was soon faced with a 3 mile, 1000 foot climb.

I’m sure I was going 3 mph at some points. I didn’t care. Because while more and more people gave up and walked their bikes every tenth of a mile of that climb, I just kept going.

And finally found the top.

And boy, did that feel awesome.

Now that section between aid station 1 and aid station 2 was not easy, even after that climb. The 21-ish miles had a net elevation gain of 1500 feet, tons of steep climbs, and literally took me almost 2.5 hours.

But I didn’t care. I was conquering hills that others gave up on. Dealing with much longer and steeper climbs than I’d face at Mont Tremblant. And it wasn’t that bad. Slow, sure, but not that bad.

The final segment didn’t have any long climbs, and even had a nice flat section coming up. I was giddy about possibly finishing this thing in less than 6 hours, and was also thrilled that I hadn’t had to walk my bike. This was amazing.

Somebody at the aid station 2 mentioned “Bowman Hill,” which purportedly awaited us with an average grade of 10% for 1.5 miles. Determined to get the whole way up without incident, I hopped on my bike and started the final segment.

The initial descent was easy, and then the famed Bowman Hill showed up. The first quarter mile was easy.

Then the grade increased. A lot. 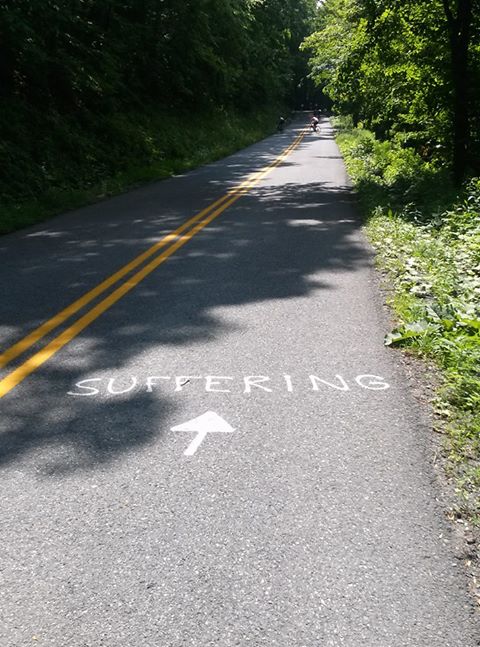 (Yes, that’s an actual photo from Bowman Hill. The marking made me chuckle as I rode past. Slowly.)

I started to wonder if I was moving slowly enough that I’d fall over, but figured that even if I did, I wouldn’t hurt myself because I was going, oh, maybe 2 mph. And I kept turning the pedals as I passed more and more people who’d decided to walk up the hill.

Of course…the last half mile still took another 10 minutes or so. But I didn’t stop. And at the top, I was pumped. Totally happy to have made the climb, and ready to finish up the course.

Most of the remainder of the ride was flat and rolling, and I was happy to see that I was going to come in well under 6 hours. I know it sounds ridiculous to be happy about holding an 11 mph pace, but this course was hard, and even just completing it is an achievement.

Eventually, I was at the final climb back to the top of Wisp. It was hot, there were more walkers, but I was going to make it. There was NO WAY I was giving up now. The finish line was just a mile away.

Nevermind that it was also some 600 vertical feet away. I could do this. I’d done all the other climbs. This was nothing.

Getting to the top of that mountain - in 5:43 total rolling time - was exhilarating. And not just because I finally got to unclip and get off my seat – something I hadn’t done outside of the two aid stations, except once during the flat section to pick up a gel flask that I dropped.

Because I’d done something I really didn’t think I could do. And because now I knew that Mont Tremblant was going to be just fine, too.
Posted by Victoria at 8:37 AM