There are a lot of things I’ve said I would never, ever do in my life. Including: a triathlon (well then), move to DC permanently (see: 2010 condo purchase), or work in the private sector (one of the best career decisions I ever made).


Entering the 4.4 Mile Chesapeake Bay Swim was pretty high on that list, too. So much for that.


When I first moved to DC 12 years ago, I met other swimmers in town who were training for this. They described it as a few hours of complete sensory deprivation, as you see nothing but green-brown water and your own hand entering the water for at least two hours. This did not sound appealing – not one bit – and I stuck to fun pool events like the 400 IM and 500 free while I chuckled at the folks who logged endless freestyle distance every spring to prep for the bay swim.


This past fall, something changed. I am unsure of what, though I believe a good deal of it was that I wanted an excuse to log some long swims in the spring in the name of “training.” Knowing that this would put several 5000+ meter swims on my training schedule, I entered the lottery and got a spot, sent in my $250(!) and got ready to go. I figured that, as with most events I enter, the training would be the most rewarding part, with race day just being a fun celebration.


Not because the training wasn’t rewarding – I DO, after all, love a good 6000 meter workout before a full workday – but because the event itself was so amazing. Pictures simply can’t convey how awe-inspiring it is to swim across a large, famous body of water like this. 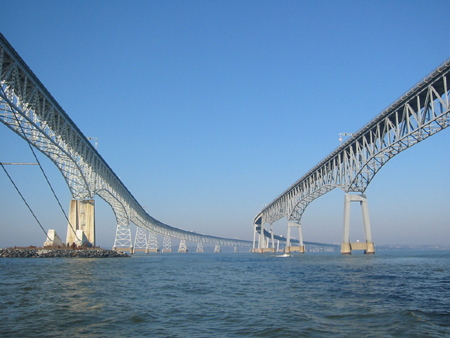 Although a lot of my training this spring focused on preparing for this event, I went into it with minimal expectations or concerns. My target time of 2:10 was based on times I’d seen posted by teammates who are roughly the same speed as me in the pool, but I knew conditions could impact the times greatly from year to year, and wasn’t really focused on time. In fact, I didn’t even wear a watch at all. When asked about my strategy, it was pretty simple:

1. Jump in the water at Sandy Point.
2. Swim until I hit land again.

The morning of the race, the race director pulled us together for the briefing, and conveyed some key information:


With that encouraging information, the DCRP crew gathered for a picture before we had to go line up on the shore. 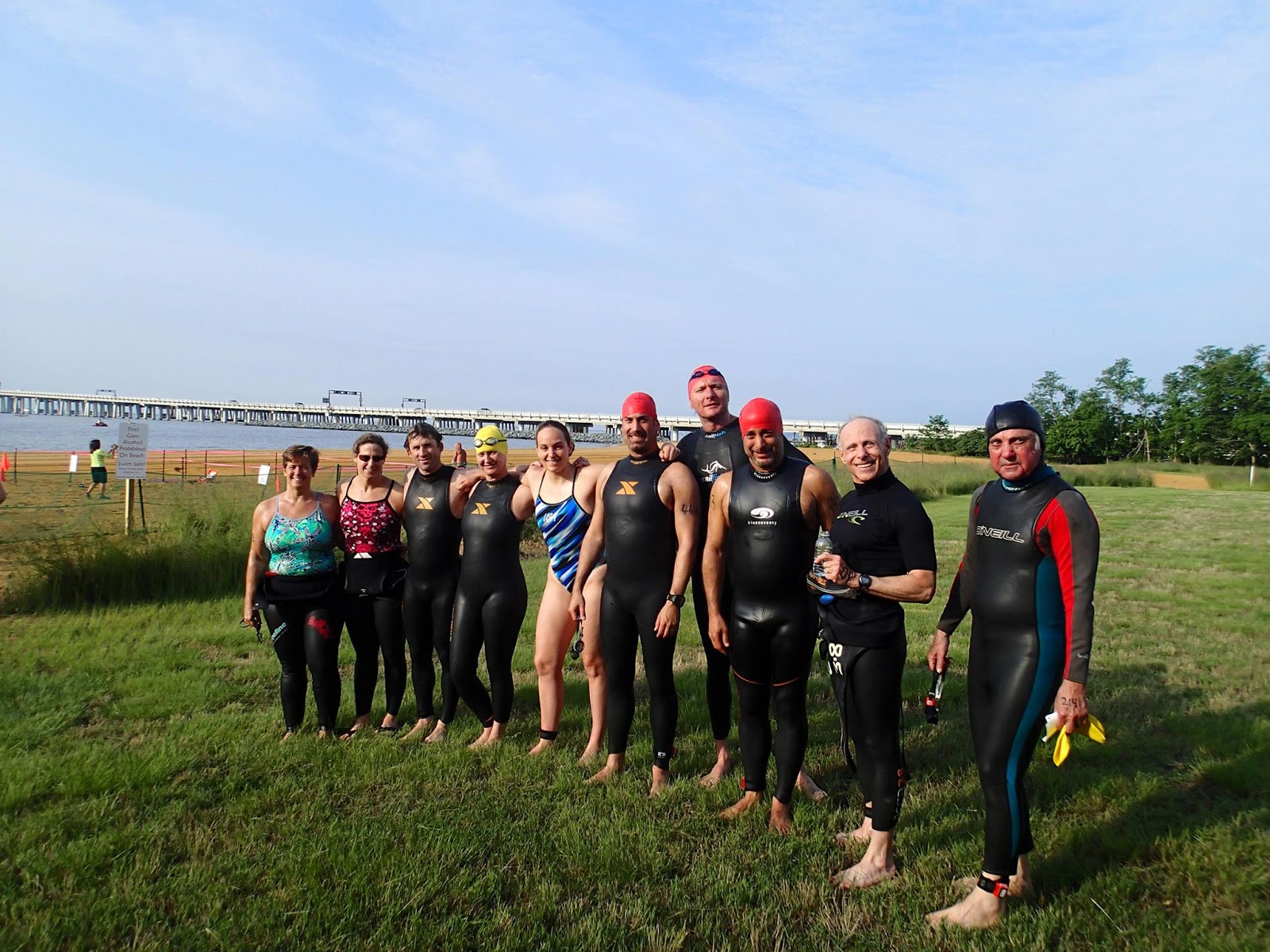 The nice thing about not wearing a wetsuit was that I was in such a minority (roughly 15% of the total field) that crossing OUR timing mat was faster, because the line was so short. And given that the water was in the 70s, it was perfectly fine for a woman-vs-water swim, and I was excited to start.

We all lined up along the beach, my friend Ed finally found me, and we looked across the massive body of water we were about to tackle. Cue the countdown, and we all ran into the water to start the journey.

Apparently, based on the way everybody started, a good portion of my wave thought we were racing a 100 meter freestyle. I, on the other hand, decided to go out slow and smooth in an effort to save my shoulder strength for any currents we might encounter. Roughly 400 meters into the race, we crossed under the first bridge and onto the course. And that’s when it hit me.

I was swimming across the Chesapeake Bay.

The body of water that can take hours to DRIVE over during a summer afternoon traffic jam. I was swimming across it.

Since I didn’t haul ass at the beginning, there were very few people around me, and I settled into a very easy pace and saved myself and my shoulders for the legendary currents. I noticed the first feed boat at Mile 1 and passed right by it, waiting for the currents to show up.

Then I passed that service boat at Mile 2. No currents. Fascinating.

My shoulders, even the one that acted up the week before the race, felt perfectly fine. Nothing hurt. And I was swimming across the Chesapeake Bay.

Damn. This was amazing.

I stopped to tread water and look around somewhere in here – sure, it was a race, but I couldn’t pass up the opportunity to take in the view from water level. And it was spectacular. 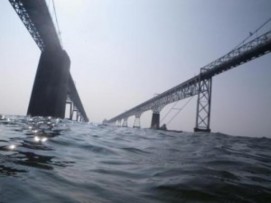 Not spectacular? The fact that my legs had minimal bloodflow because I don’t kick when I swim. I figured I'd fix this by kicking a little bit once I approached the finish line so that I'd be able to stand up.

I rolled onto my back for some backstroke a few times just to enjoy the view again, because, wow, I was swimming across the Chesapeake Bay.

Mile 3 and the associated feed boat eventually showed up, but I wasn’t hungry or thirsty, so I swam right past. Shortly thereafter, I noticed that I was suddenly a little closer to the eastbound span of the bridge than I had been a few strokes earlier.

I didn’t really “feel” the current, and just resolved to swim so that I kept the distance between myself and the eastbound span of the bridge constant. This seemed to work alright, and I came upon the mile 4 buoy marker much earlier than I thought I would. It felt as though I’d been in the water less than an hour, and I couldn’t believe I was about to be done.

We soon turned towards the finish line, which involves a 400 meter swim along a jetty. I started swimming as hard as I could, and noticed many people WALKING in the last quarter mile or so.

In case you missed the memo, swimming is the fastest way for a human to get through water under their own power. I have no idea what these folks were doing, but it sure was a big morale booster to pass 10-15 people at the end like that.

Eventually the finish line showed up, and I jumped out, asked if I could swim back to the other side, and was told that I could not. Something about reopening one of the major shipping channels on the east coast of the United States.

There weren’t any clocks at the finish line, but somebody who was wearing a watch let me know that I’d probably gotten out around 2:25, which seemed incredible to me given that I felt like I was in there for an hour, tops.

So that was a major delta from my goal time, but I’m not remotely upset, just perhaps a little bit disappointed for not pushing harder because I woke up Monday morning less sore than I am after racing a 400 IM at a meet, indicating that I clearly didn’t leave it all out there. The goal time I set was based on times I’d seen out of folks I trained with, and it turns out that they all wear wetsuits, so that benchmark wasn’t a very accurate starting point.

But even without that information about the times, it was simply awesome to swim across the Chesapeake Bay like that. Not once did I feel bored or tired of swimming. Not even for a minute. Which was, in a way, more rewarding than meeting any kind of goal time.

This still indicates I have a problem with open water swimming, namely, that my pool times predict that I would be much faster in open water than I am. Part of this is the fact that I spent years and years perfecting my turns so that I could be a solid short course swimmer, but that’s not it. I often find that, when in a lake, river, or ocean, I lose all focus on time, and instead of pushing ahead relentlessly like I would in a 500 free in the pool, I notice the surroundings, the conditions, and the sheer beauty that some open water venues offer.

Sunday was no different, and I don’t know if I would have wanted it to be.