Sometime in the middle of last week, I decided that I’d race a half ironman on Saturday.

That’s not quite how it went. More like, I had it on my calendar for the season all along, then crashed and spent most of a week in bed when I should have been in the middle of peak training, and started thinking that if I had a hard time lifting my arms to reach for my phone to email my office to let them know I'd be out sick, perhaps my body wasn’t really ready to take on 70.3 miles.

After a bunch of rest and training plan adjustments, I found myself about a week out from race day, back to my normal, pre-breakdown paces and feeling alright. Not great, but alright. I was sure I’d blown my training plan, but thought I could still pull off a sub-6 hour 70.3, which I just barely missed at this race last year.

Plus, I’d already paid for it, and Rachel and I had a super-fun weekend planned.

And, by “super-fun weekend,” I mean “going to bed at 8:30 pm and eating plain sweet potatoes and chicken for every meal.”

You do your thing. We’ll do ours.

Race day eventually showed up, and we took our sweet-potato-loaded selves to the race site, got our transition areas set up, and huddled under a tree to avoid the downpour that greeted us just before the swim started. Once it was time to assemble for the swim, I stayed calm and failed to fully grasp the fact that 70.3 miles is a long way to go. Time goals? Race plan? Pshhhh…I was happy to just be standing upright at the start line, which is more than I’d have been able to do 18 days earlier.

And, of course, happy to swim, because swimming is awesome.

Swim (Official time 30:30, 1st AG, 2nd women): The horn went off, and I swam along with one other woman, with everybody else behind us. It was so desolate after 100 meters that I wondered if I was horribly off course. It took me a good 300 meters to get into a good rhythm, and then just swam along until I started running over all the dudes in waves in front of us who never bother to train.

I struggle with maintaining my race focus and effort level in open water, and always feel that my race times don’t reflect my true swim fitness level. Due to years of experience racing in the pool, I have no difficulty staying on task in pool races, but open water has been tough for me. One of the few goals I had going into this race – other than finishing upright and not passing out – was to push harder in the swim and take advantage of my swim fitness. I think I’m moving towards that, but still feel like I have a 27 or 28 half ironman swim in me. I wound up coming out of the water in 29:40 (the official time includes a long, uphill run to transition), which is ok. In my very bare bones race plan, I’d told my coach that there was no reason for me to be in the water for more than 30 minutes. And I wasn’t.

Plus, I was the second woman out of the water. Not bad so far.

Transition 1 (3:10): That rain that came through? It was a cold front. I spent more than a little bit of time putting on gloves and warm socks. It was worth it, though, perhaps I wouldn’t be saying that if I’d been right on the edge of a goal overall finish time.

Bike (2:55:47, 5th AG, 24th women): My goals for the bike were purely power-based, and those targets were set based on a functional threshold power test from January, along with data from my last few long rides. The idea was to ride in the lower end of the 164-174 W range, and my average wound up being 155 W. I consciously held back for a couple of reasons. First my heart rate didn’t settle down for quite a while after the swim.

That wasn’t all, though. You see, the elevation profile for this bike course…well, it’s like this:

My glutes and hamstrings were getting fatigued from having absolutely no coast time on the flat course, and I was, as usual, terrified of overbiking and then being forced to death march through a 13.1 mile run.

Flat courses also require a lot of focus and tolerance for monotony. However, I had just the antidote for this in the back pocket of my tri top, right next to my gu.

Other than missing my power target by about 5%, there isn’t much to say about the bike. I held a lower average heart rate than last year, and still finished about 8 minutes faster, which tells me I’m in slightly better biking shape than I was for this race last year. That’s encouraging.

Transition 2 (3:37): My toes were frozen and I struggled to put on dry socks because my hands were a frozen mess, despite the heavy winter gloves I wore for the bike. It turns out that dry socks were unnecessary for THIS run course. Could have saved myself the time and trouble.

Run (1:54:49, 4th AG, 17th women): Those dry socks? Lots of good they did me when I encountered multiple flooded out sections of the run course. I tried dodging a few of the enormous puddles, only to find that the grass was also flooded, and finally gave up and just ran straight through them.

My first few miles had me right around a 9 minute per mile average, and I was very aware that if I snuck in just under 2 hours for the run, I’d be pulling a sub 5:30.

I was also very aware that my legs felt stiff and tired, and was concerned that I could still crash – hard – in the next 10+ miles.

Until I suddenly sped up in Mile 4. And more or less held onto it. 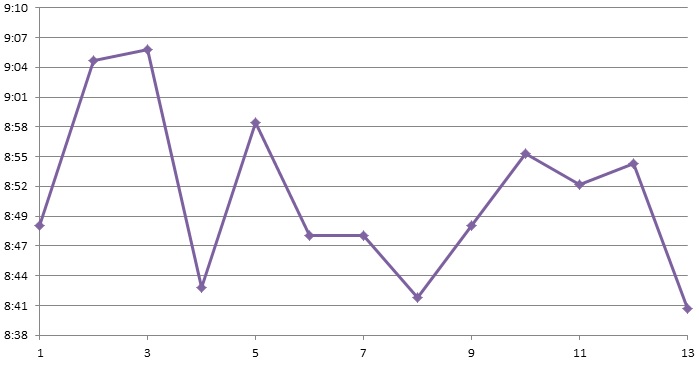 What kind of person does that? I mean, that’s almost as unreasonable as negative splitting a marathon by 3minutes and setting a new 13.1 PR in the second half of said marathon.

The pace felt controlled and sustainable, even with my waterlogged shoes. I kept pushing along, waving to Rachel and Karen a couple of times, which was probably the only cool thing about the double out-and-back run course, and also gave a shout out to Penelope once I figured out that the woman in the green and blue SOAS kit was, in fact, her. At some point after Mile 10, I became aware that I was very sick of running and would like to be done.

But with 5:30 looming so close, there was no time for a walk or stretch break. There was only time to cover those miles at my current pace, and not let up.

If only I’d been able to record my thoughts for those 27-some minutes. I promised myself a comfortable chair. A nap. Flip flops for my now swollen feet. Ice cream. Beer (I don’t even drink?). A vacation on the beach. Pie. All of those things, if only I kept running until I got to the finish line.

And while I did keep running to the finish line at more or less the same pace, I was definitely lying to myself out there. Except the part about the flip flops, which might have been the most wonderful experience of the day.

Well, maybe an age group award and a 35+ minute PR was pretty good, too. 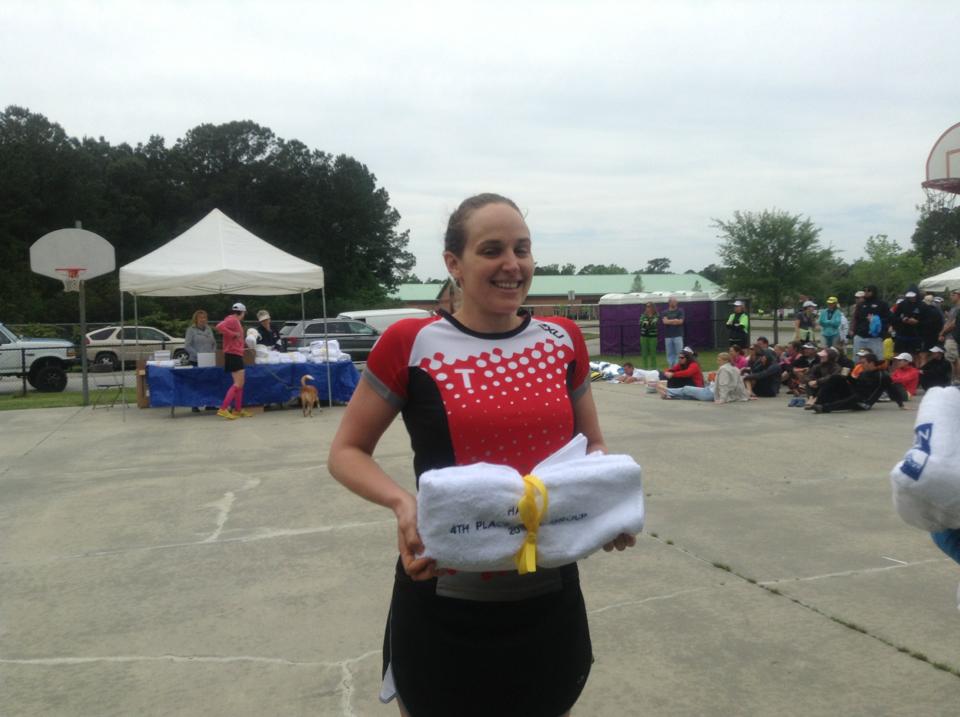 It was hard to know how to feel about the outcome, since I didn’t go into the race with an overall time goal. Since barely missing out on the 6 hour mark last year, I’d had my sights set on that, and at the beginning of the year, I even sent some estimates over to my coach.

Oddly, the swim and bike times were spot on. The run time was much faster – no doubt thanks to some run fitness I picked up while training for the Myrtle Beach marathon. And the overall time was almost 20 minutes faster.

I guess we’ll say “goals met” for this race. Which still shocks me given what the rest of the past month looked like.