I’m still having a difficult time accepting the race I ran a week ago in Myrtle Beach – that 3:47:29 marathon, with the three minute negative split and a 47 minute improvement over the last time I raced the distance just 15 months ago. After the initial shock after the race, I was giddy and plotting how I was going to run 50-milers and fast half marathons on my way to breaking some ridiculous marathon goal time this fall.

Then I felt lost.

That sub-4 hour goal had been something I’d contemplated for a long time, even before I ran my first marathon. And now? I’d not only done it, but run quite a bit faster. So what’s next? Once the exuberance faded, I desperately tried to find something else to chase NOW. Could I aim for a massive PR at the ironman distance this summer? Faster 5ks? What? WHAT DO I DO?

In other words, I was definitely not in a state of mind to coherently write about the race that I still can’t believe happened. But that’s all settled a little, and I have some medium- and long-term plans in the works.

Enough of that. What, exactly, does a 47 minute marathon PR look like? 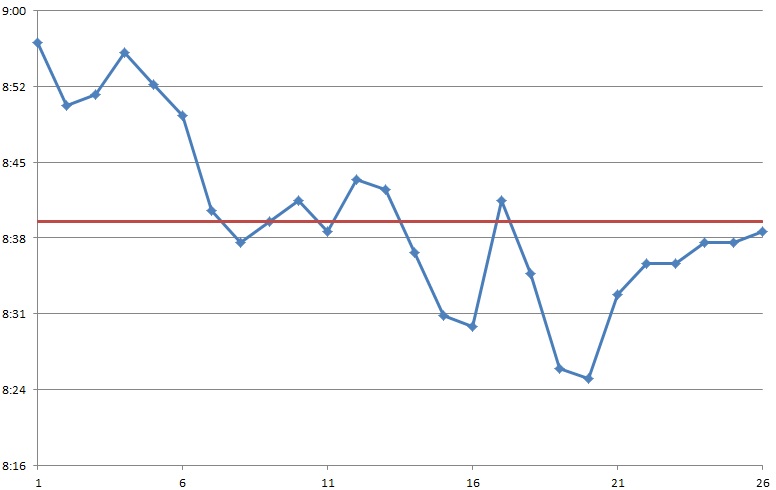 Oh. Like that. With a negative split so pronounced that the second half of my race was 1:30 faster than my half marathon PR, which was only three months old.

As much as the engineer in me likes to think that you can explain everything with well-designed graphs, the written word still has its place, particularly when describing the experience of a race of any length.

Which is where this race report gets to be a little different. I’ve already shared my time, and sure, I’ll include my splits, but I write here to document the experience of the race. The details of the experience may surprise some of you, since I don’t talk about religion here because, well, this is a blog about triathlon, not religion. The details of my faith aren’t important, but what does matter is that I’ve had several experiences in my life that I’m pretty sure I only survived because of divine intervention of some sort – including, but not limited to, the time a truck loading ramp flew into my car while I was driving 80+ mph on I-40 and I walked away without a scratch.

Generally, the fact that I believe in a higher power of some sort wouldn’t have been important, but as I was searching for inspiration at 8:30 pm on Friday, I was reading through Dorothy’s blog in hopes that her 3:11 marathon PR awesomeness would ooze through the computer screen and onto me. It was there that I found the words that called to me in the form of Isaiah 41:10.

Do not be afraid, for I am with you;
Do not be discouraged, for I am your God.
I will strengthen you and help you;
I will uphold you with my righteous right hand.

I still can’t tell you why I felt the need to do this, but I wrote it out on a scrap of paper and stuffed it into the pocket of my handheld water bottle, right next to my target race splits. Race morning came, and I hung out with Rachel and Vanessa at the start, repeating the words in my head as we waited to go and the fear of attempting to run sub-9 minute miles 26.2 times finally hit me.

As the race starts at 6:30 am, it was fairly dark for the first few miles, but the streetlights were bright enough that the course was safe – and that I could see my mile splits pop up on my watch. Knowing that I was supposed to target between 8:58 and 9:10 pace for the first 6 miles to reach my goal finish time range of 3:50-3:55, I became concerned that I was going out too fast, even though it felt easy and effortless. The fear started to take over.

Do not be afraid, for I am with you.

My average pace kept falling as we approached the turnaround near mile 6.5; I pushed away the voices in my head that told me I couldn’t keep it up with my newfound mantra.

Do not be afraid.

Per the race plan from my coach, I was supposed to start moving a bit faster after 10k, though, I don’t think I was supposed to be dropping into the 8:40s, and certainly not the 8:30s, right away. My average pace continued to drop, and each split scared me a little, until I embraced it.

Do not be afraid.

Though I’d lost Rachel and Vanessa as we crossed the starting line, I saw Vanessa right before Mile 10 and briefly chatted with her about how we were going strong to break 4 hours (the goal for both of us), how it was a beautiful day, and a great course. Mostly, though, we stayed silent, which gave me a chance to battle the urge to tell her to go ahead, that I was too slow to keep up with her. While I was committed to running my own race, I knew that saying this out loud would be mentally defeating, so I simply used Vanessa’s strength to pull myself forward as my pace started to feel just a little harder.

Do not be discouraged.

Vanessa stopped to refill her water bottle, and we wound up split up for the rest of the race. The course opened up to an oceanfront road, and the beauty of it pulled me forward, though I didn’t realize just how much my pace was dropping until I saw the mile splits.

I will strengthen you and help you.

A headwind came to visit us for a few miles – nothing severe, certainly nothing as strong as the winds along the Potomac in the winter, but just enough to slow down my pace a touch. It could have sent my brain spinning into intense fear of slowing down at the end of the race, but I had my system down pat now.

Do not be discouraged.

With about 8 miles to go, we turned around and that headwind turned into a tailwind. 8:20s? In a marathon? A year ago, I could barely do that in a 5k. How was I doing this? How would I continue?

I will lift you up with my righteous right hand.

Once past the 20 mile point, I was aware of the potential for a serious crash at any moment. But having told myself to not be afraid about 8,000 times, I was just aware of it, not terrified of it. I started calculating what my finish time would be if I could just hang on to 10 minute miles for the remainder of the race. Four hours was in the bag, and 3:55 looked like it was almost certain, too. 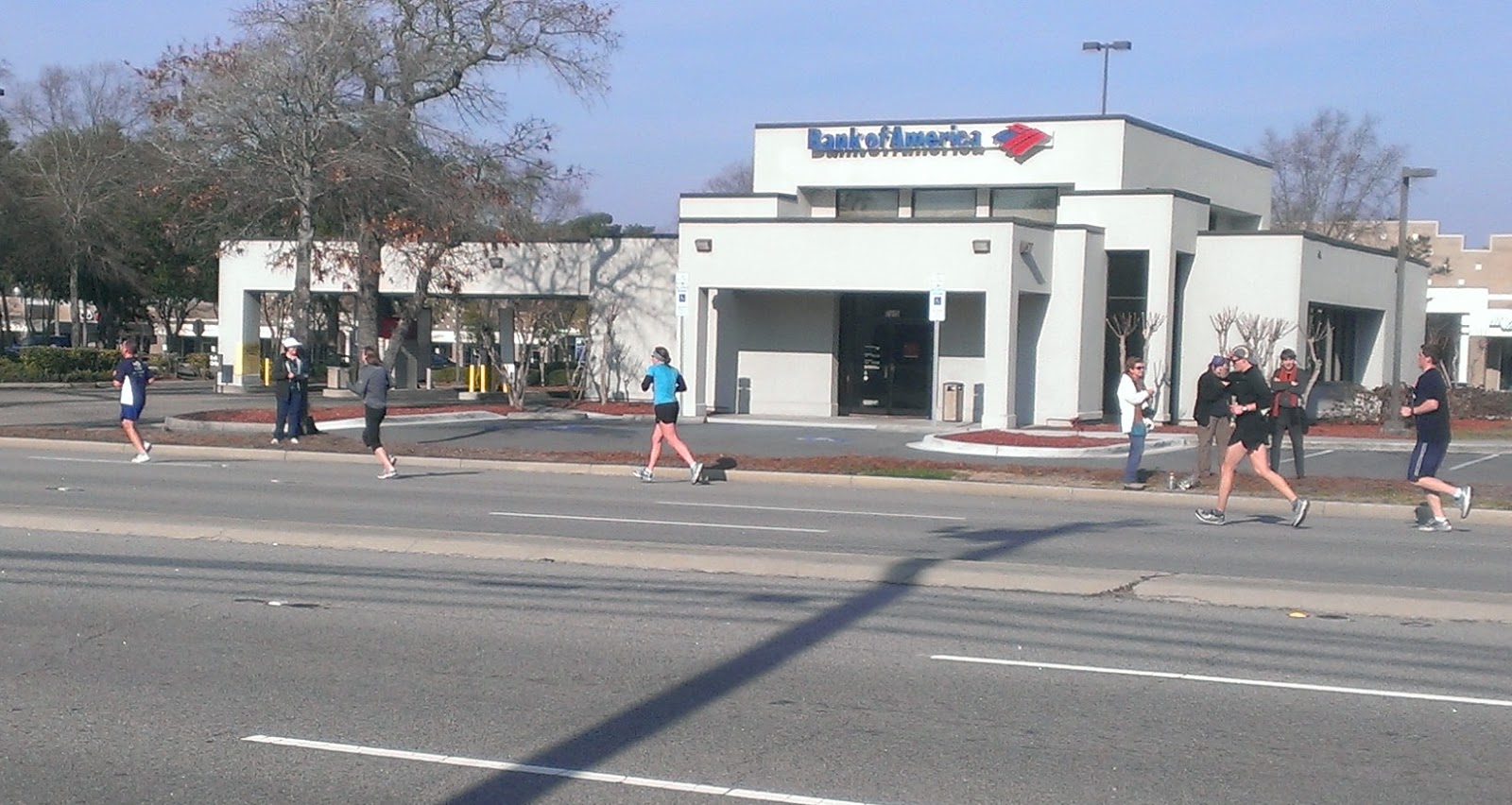 And then as each mile ticked past, I realized that I wasn’t just hanging on with 10 minute miles. I was finishing with a sub-53 10k.

After realizing that the finish time was almost certainly going to be under 3:55, I started to consider how far I could finish under 3:50. Was it possible? Something in the 3:49s. Maybe the 3:48s. My legs hurt and I started to feel ill, but it didn’t matter. I was going to finish fast.

I will strengthen you and help you;
I will uphold you with my righteous right hand.

And then after I crossed, I stopped my watch to see 3:47:33 (extra seconds because I don’t stop my watch right away).

I stumbled around the finishing chute a little bit, got a medal, and then Jason found me and took me over to lie down so that I could let my coach know my results and brag to the world that I’d just run a race I never knew I had in me.

Later, we found Rachel at the finish line, and celebrated her very first marathon finish ever. So proud. 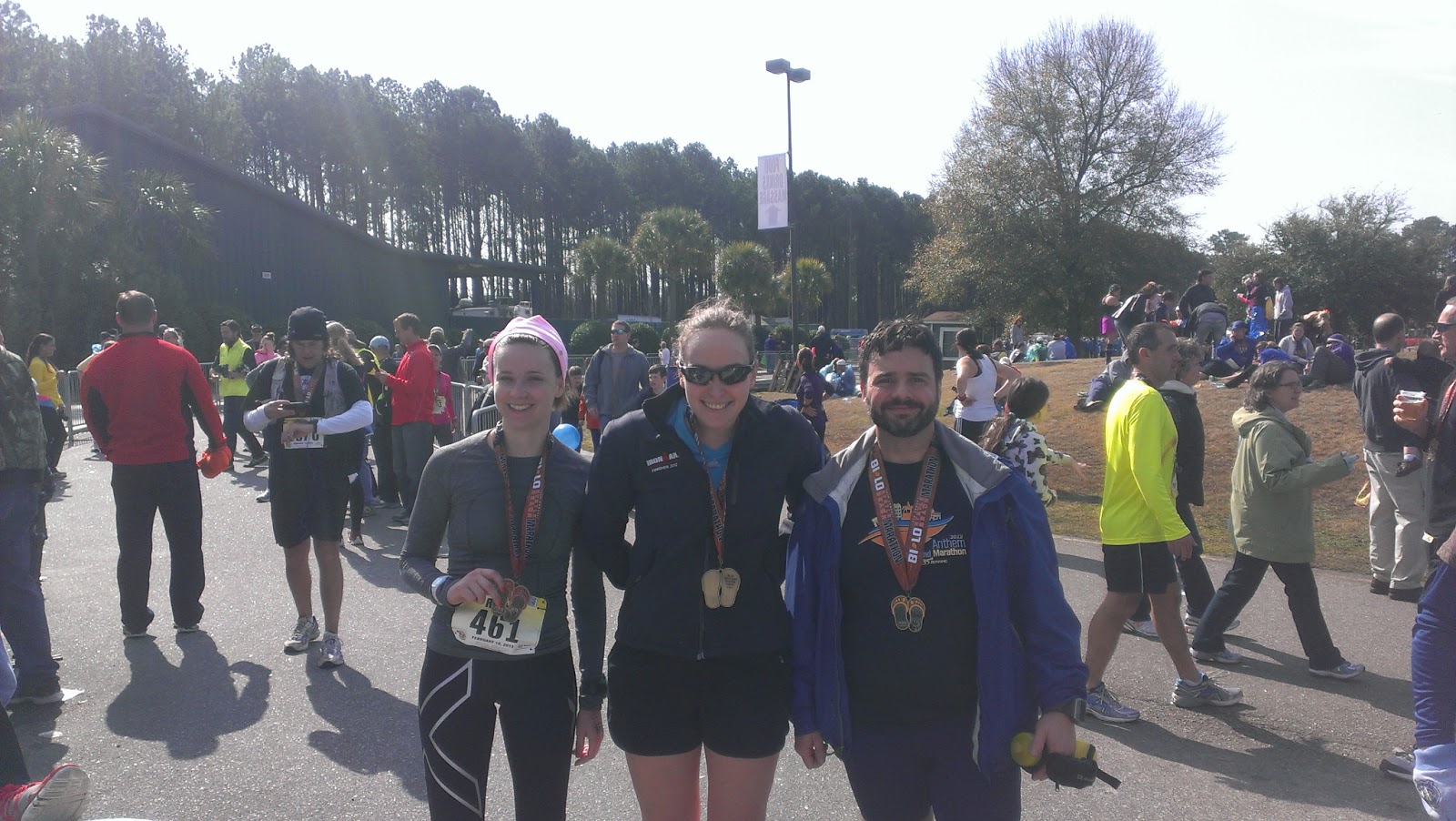 So that was how I managed the mental side of the race and let my body perform the best it could that day – which turned out to be pretty well. The intent isn’t to proselytize, or convince everybody that they should be turning to religion or some higher power during their races, because it’s not for everybody. It just happens to be how things worked out for me last weekend.

Oh, and you didn’t think I would let you leave without seeing one more graph, did you? As much as I tried to stick to my coach’s plan, it turns out I was running out of my mind (literally), and while my splits followed the intent of the plan, they were, um, a touch too fast the whole time. 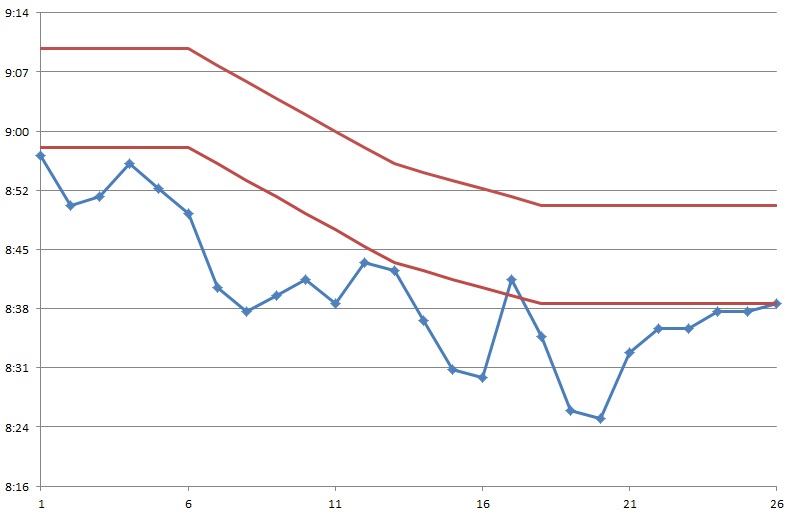 I feel like when you back it up with a 3 minute negative split and a finish time that crushes all your goals, you’re allowed to deviate from plan a little bit.

Next stop...ah, I'll save that big old goal talk for another day.
Posted by Victoria at 10:58 AM