Impostor Syndrome and the Purity of Running

One of the most appealing things about running is that it can be such a pure sport – that is, it is simple and uncomplicated. All competitors cover a predetermined distance, and their performance is measured by a watch. I won’t pretend that there aren’t political games associated with sponsorship, national team selection, doping, etc. at the higher levels of the sport, but ultimately, your performance is assessed by an incredibly objective measure: the amount of time it takes you to cover the course. Such objective assessment is very rare in our world, and the ability to cleanly evaluate my progress and compare my results to those of my competitors, is a welcome change.

In particular, this is a welcome change because one’s running achievements cannot be questioned or minimized, e.g. if you run a sub-40 10k, you own that. Now contrast that kind of clear performance with other, more subjective, accolades, which can easily be dismissed if one is affected by the psychological phenomenon of “impostor syndrome.”  This non-clinical syndrome is characterized by an individual's inability to internalize their accomplishments, regardless of the clear and continuing evidence of their competence. Psychologists Pauline Clance and Suzanne Imes began writing about this phenomenon in the late 70s, and observed that some individuals will consistency attribute all of their successes to luck, fear being exposed as less competent and intelligent than they’ve fooled people into believing they are, and believe that they must constantly work tirelessly to keep the house of cards from falling down.

While self-diagnosis is a dangerous game to play, and I’m not throwing any label on myself, I will say that it’s a mindset I can understand. Nearly 15 years later, I’m still convinced that I was admitted to MIT by mistake, and spent four years positive that I was about flunk out at any moment. Somehow, the non-failing grades kept rolling in, and as I moved to more and more advanced courses and research work, I continued to fear that somebody would figure out that I’d only passed through physics and calculus because I lucked out with the problems that were given on exams. I was positive that, at any moment, I could be exposed as an idiot who didn’t belong, but then I managed to stumble out of the place on graduation day…and then started a job in DC where the same thoughts continued to follow me every day. I moved along to graduate school, then to another job at a big-name research institution, and finally back to working in DC, all the while fearing that everything would come tumbling down at any minute. A few years ago, my current employer decided that I would be a great addition to their staff, and while I deeply feared (and still believe) that the challenge would be too much for me and that this would finally be my undoing, I was excited to be part of the organization’s mission and signed on.

This has all been at the forefront of my mind recently, because a new sign just showed up on my office door. 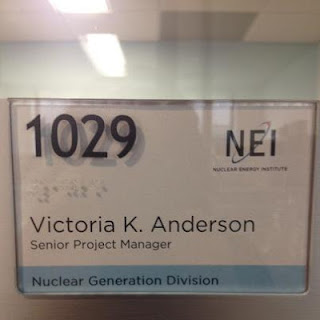 Did somebody forget that I’m just a 32-year-old punk that hasn’t accomplished much besides faking her way through school a decade ago? And now, I’m supposed to be working independently on some relatively high-profile projects and speaking in front of big important federal advisory committees with court transcribers and things like that? Sitting on executive committees for engineering standards boards, managing large groups of utility personnel, and doing all of this with my organization trusting me to do it right?

To say it’s unsettling and difficult to come to terms with would be an understatement. In the face of that, the pureness of running, of measurement of speed over a given distance, is such a great escape. When I took on my first marathon in November 2011, there was no taking away the 26.2 miles that I covered. And last winter, when I would hit faster and faster times at track workouts as I trained for my first sub-two hour half marathon, those were real times on a real, measured track. No qualifications, no second guessing, and when I crossed the finish line at that half marathon in 1:59:04, it was a real thing.

Until I managed to start questioning these things, too. Was the course short? Was it an easy course? Did I just have a good day? I couldn’t possibly be capable of something like that. My GPS watch must be malfunctioning, and I must be cutting the laps at the track short somehow. That 1:53 at the Richmond Half Marathon in November? Clearly a fluke. This idea of running a marathon in less than four hours three weeks from now is nonsense. My self image tells me I’m just a slow runner, not somebody who can chase real time goals. But in the meantime, I’ve found myself running alongside fast people and don’t want to let them down by failing, so I have to continue to keep up the charade.

This kind of thinking can be very limiting in athletics, more so than in the workplace, as in a professional atmosphere, one seldom has the option of turning down a challenge, it’s simply the work that has to be done. But in sports? It’s easy to back off the pace, to convince yourself that you can’t hold something, and cling onto your self-imposed limitations. If you run a bunch of 800s in the 3:30s one week, and don’t internalize that improvement and own it, it’s easy to hold yourself back the next week and drift back into the 3:50s if you convince yourself that you aren’t capable of the faster paces.

This all faced me last week when I headed out for my long run. I was facing a lot of self-doubt going into it – I’d be by myself without teammates to haul me through harder portions, I’d had a hard bike workout the day before, I’d been inundated with high-pressure work all week, and I had every reason in the world to believe that I’d tank the run. Plus, it was cold and windy, and I was running by myself with no external motivation or support.

My nominal long run goal pace for this training cycle has been between 9:30 and 9:45/mile, with the exception of specific long runs with designated race pace sections, where we build towards marathon pace or slightly faster. Saturday’s instructions were to run at that long run pace for 10 miles, and then build towards race pace for the last four miles. When my first mile checked in at 9:24 – over a minute faster than the pace I averaged for my first marathon just over a year ago – I internally chastised myself for going out too fast and started worrying about how badly I would crash. Surely I cannot hold that kind of pace for a long run, and THEN get faster at the end.

Mile 2 clicked off in 9:15. Mile 3 in 9:16, ditto mile 4. Those four build miles at the end were not going to be pleasant, especially not since they’d be uphill.

But rather than get caught up in how I was running beyond my own perceived capabilities, and how my goals were ridiculous and I’d never be able to meet them, I just kept logging the miles at what felt like an easy pace,

And now it was time to “build.” From a pace that was already AT my marathon goal pace. While going uphill.

8:51. All well and good, fine, but now, The Mile of Truth was ahead. The super-hilly mile that included the steep climb up towards the Calvert Street exit from Rock Creek Park. 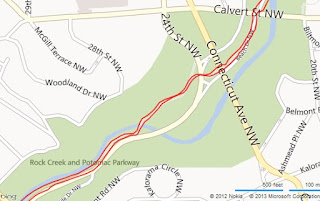 This was the mile that, in the summer of 2011, I often struggled to cover at less than a 12 minute per mile pace. It can be mentally defeating, and I was prepared to see my pace plummet.

The rest of the way, I wasn’t sure how much I had left to build to. I was already below race pace. There were some more hills. It was still windy. These splits – they can’t be mine. I didn’t just cover The Mile of Truth in less than 9 minutes, especially not 12 miles into a long run. But, like I had earlier in the run, I just went with what felt like the right effort level and silenced the doubt. I wound up covering 13.1 miles in 1:58:49, which was faster than what my half marathon PR was 10 weeks ago, and finished up the whole thing at an 8:41/mile pace, with a 9:05/mile average. 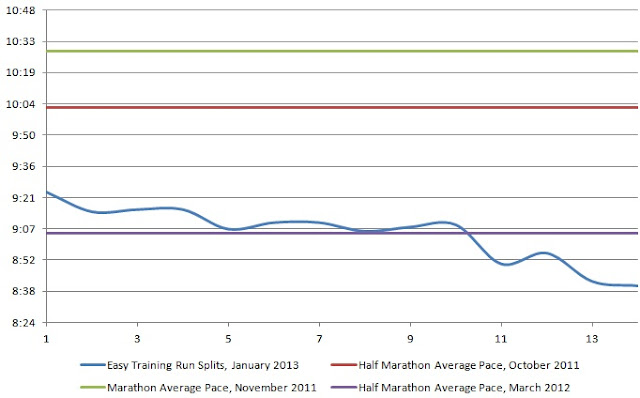 I still sit and look at these splits with some disbelief, especially in the context of my self-imposed beliefs about my running capabilities. The run didn’t feel that hard, even with the headwind, the solitude, and the hills. So how did it happen?

It happened because I forcefully shoved aside the self-doubt for a little over two hours and ran without self-imposed limitations. No, I wasn't racing or going all out, and I maintained a controlled pace. But I didn't let myself get talked down from a faster pace merely because the number was something beyond my perceived capability, I simply kept my effort to the appropriate level for the workout, and let the results fall where they may.

Of course the self doubt all surfaced again after the run; as I said, I still can't believe those splits are mine. But they are. Which is the wonderful thing about the purity of running.
Posted by Victoria at 8:49 AM