Last week got off to an absolutely awesome start. Anytime you swim 10k in one shot to kick off the week, things are going to be good. Add an age group win in a 5k (no, I’m not shutting up about that anytime soon) less than 24 hours later, and it’s just awesome. Follow it up with a speedy track workout the next day, and it’s like the most amazing week of training ever.

Until the long run on Saturday that ended with the three folks on our team training for the Myrtle Beach Marathon in  not-so-high spirits for the last half hour. Sure, it was our longest run of this training cycle, but I don’t think that was what got us.

It was when I violated the #1 rule that I impose upon the swimmers I coach when we go to meets:

Now, you might think that rule is there because I don’t want to listen to teenage girls whine.

And you’d be correct.

But it’s also there because one person vocalizing their unhappiness can quickly bring the entire group spiraling down into a mess of negativity. And so far, in this training cycle, I've tried to avoid any kind of negative talk during tough training sessions, because it just doesn't do any good. Ignore the negative thoughts, and channel the support of your teammates, and they usually pass.

Start vocalizing them? Game over. And that's the mistake I made during Saturday's run. My right hip locked up shortly after the halfway point, and I avoided mentioning anything until we had three miles to go. And then I just started complaining about it, about the hills, about the wind, about the uneven path...basically, about anything.

And it brought down our entire group. What it didn't do? Fix my hamstring, flatten the hills, or really, make any positive difference. Instead, I just made everybody as miserable as I was (possibly more miserable, I'm intolerable when I'm whining).

Thursday: A 1:15 trainer workout in the morning, with spinups and several zone 4 intervals, and 3200 yards of swimming with DCRP Masters in the evening.

Saturday: An 18 mile long run with Mia and Rachel, at an average pace of 9:27. My right hip and hamstring locked up around mile 10, and I kept quiet about it until sometime in the middle of mile 14, when I started tripping over cracks in the trail. That quickly soured the run for the entire group, which was not awesome, and while our pace slowed a bit for the last three miles, we actually remained relatively consistent over the run as a whole. 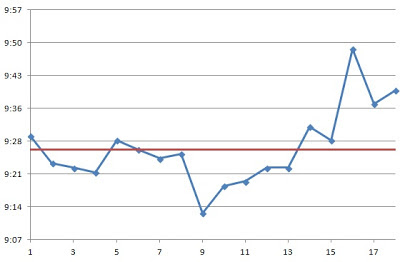 However, if I graphed our attitude by mile, it would not be as good of a picture. Lesson: No whining.

Sunday: An hour of easy spinning on the training and 45 minutes of strength training/stretching in the morning, then 16 miles of round-trip bike commuting to and from coaching in the afternoon. Nice, sunny January day.
Posted by Victoria at 7:55 AM