Tuesday morning was a pretty routine morning, starting off with an early-morning workout before hoofing in to work. The only oddity was that I’d shifted my swim workout from the evening masters practice that I like to attend to a solo swim session in the morning, because Tri360, a local triathlon shop, was hosting a fun meet-and-greet with professional triathlete Hillary Biscay that night. Not one to turn down the chance to meet somebody who has finished FIFTY SEVEN iron-distance triathlons, I was perfectly happy to wander over to the pool shortly after it opened at 6 am and log my yards early on.

Partway through my warm up, I noticed a bunch of commotion on deck. Now, if you’re a routine early morning swimmer, you know that mornings at the pool are seldom exciting or rambunctious. Everybody who is there has a mission – to swim their workout and get on with their day. But Tuesday? Something was happening around 6:15 am, and I was confused, until I saw a group of swimmers trying to find lane space together…and noticed that Ms. Biscay herself was among them.

Though tempted to preempt the chance to meet her in the evening, I instead moved over a lane and continued with my swim workout because 1. She’s a professional athlete, so being at the pool is like being at work for her, therefore interrupting her with fangirl talk would be irritating; 2. The group looked like it was going to jump right into my lane and make everything really busy; and 3. I had a workout to do, right?

As I was finishing up, I saw that she was chatting with one of the fellows in her lane, and figured that I wouldn’t be interrupting her any MORE if I spent 30 seconds awkwardly introducing myself. So I did, and found out that Hillary is quite friendly and energetic after a few thousand yards before sunrise. Super sweet, and very excited for the events that evening.

I showed up to the event ready to finally spend some money on some better winter cycling gear…and ready to fetch a killer autograph. 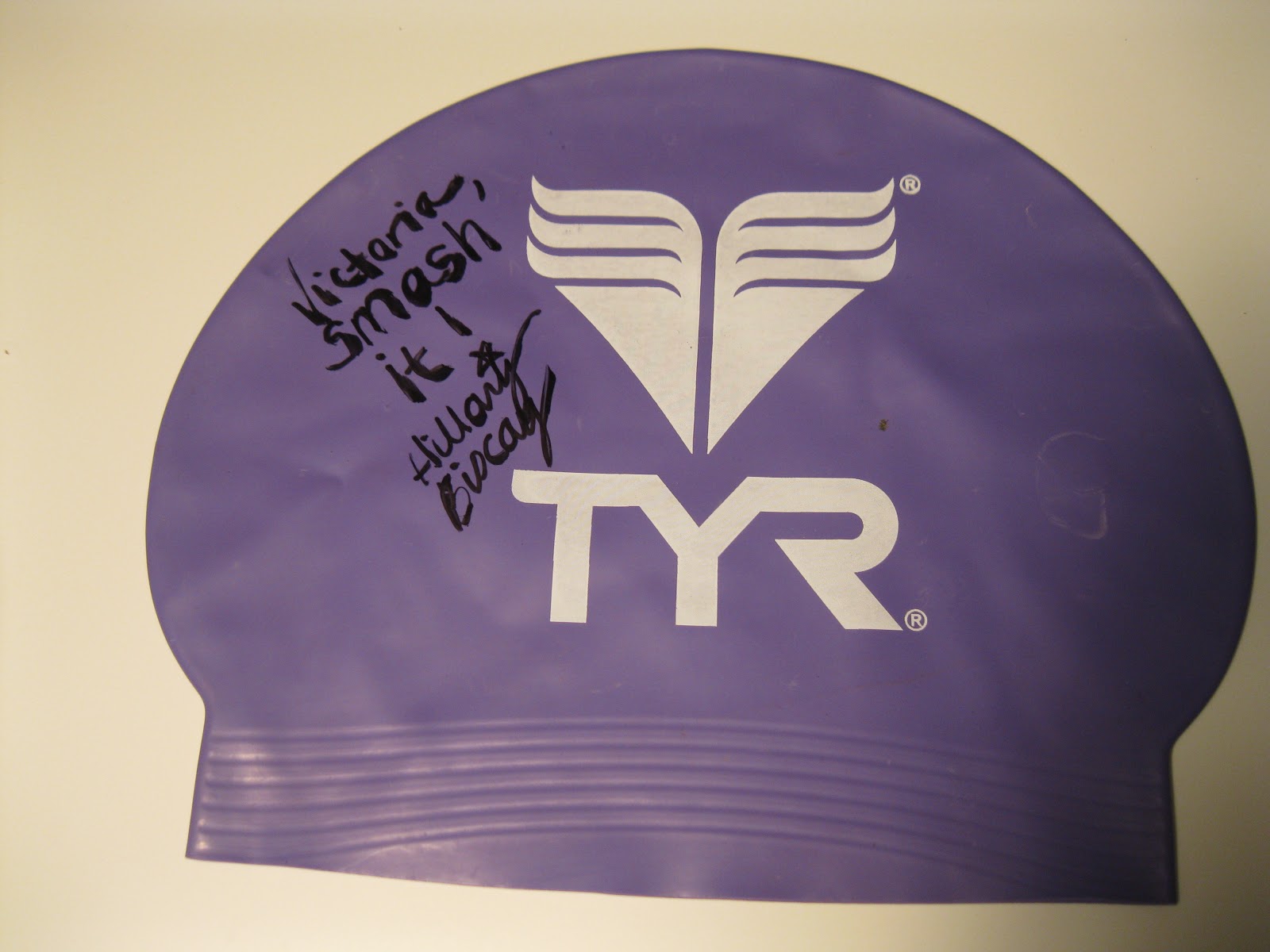 I thought maybe I’d swim with this cap, but I think that instead, I’ll frame it and put it up in my office to remind me to smash EVERYTHING. I mean, if a 57xironman is telling me to smash it every day, I'd best not be slacking on my tempo runs or bike trainer workouts.

Or any swim workout ever.

Thanks for the autograph, Hillary! Hope you enjoyed DC, we'll make sure that Wilson is short course for you the next time you visit.

Here's to some serious inspiration for next season. Fitting, because Hillary mentioned she might be at Ironman Mont Tremblant 2013 as well. Smash-fest ahead!
Posted by Victoria at 6:05 AM