Last week, after I finally decided to shut up and just race the Giant Acorn International Distance Triathlon, I sent my race plan to my coach. Let me share this super-secret, successful race plan with you:

The point here is that I wasn’t worried about strategy or pacing, and I had one real goal – get a total time under 3 hours so that I can put that time goal aside and work on other things over the winter. With that in mind, I shoved my bike and gear into Rachel’s car, and we made our way down to Lake Anna. 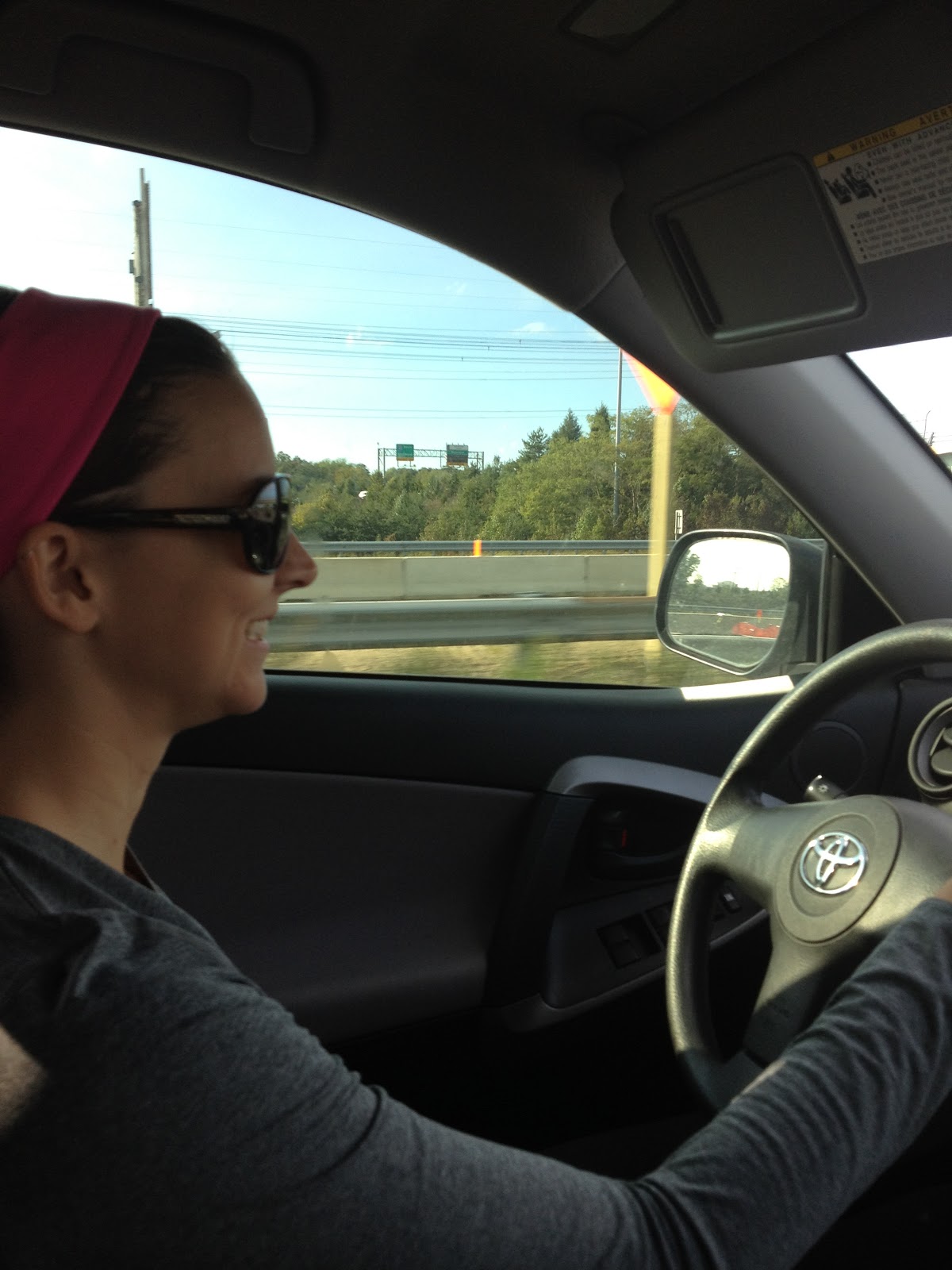 Once at the race site, I set up transition, stashed candy corn in the bento box on my bike, listened to people complain about the fact that the swim would not be wetsuit legal (whatever), and eventually wandered down to the lake to start the swim.

I followed the feet of the lead woman in our wave for about a third of the course, enjoying the draft, but then left her feet because she was getting off course. I felt alright – not strong, but alright – but felt like I was in the water perhaps a little longer than I should have been. I glanced at my watch on the way out of the water, and saw that I’d registered just over 27 minutes, making this the slowest Olympic-distance swim I’d done out of four races at the distance.

This is what slacking in the pool all spring and summer gets me. But there wasn’t time to worry about that, I had some biking to do.

I’d never ridden on the course before, and all I knew is that it was generally considered fairly fast. I found a few gentle, rolling hills, relatively easy corners, and fairly well-maintained pavement. I spent the majority of the bike making sure that I didn’t go at ironman pace, because this was about 20% of the distance of an ironman bike leg, and I ought to go JUST a bit faster. About 5 miles in, my average speed was 19.5 mph, and I wondered if I had either become Super Biker Woman, or if we had a tailwind that would soon turn into a headwind.

Yeah…you can see where this is going.

The headwind wasn’t that terrible, and while it was disappointing to see my average speed drop, I got a little boost at the end of the first lap when I saw our coach and some teammates cheering us on. This had to mark the beginning of a tailwind-assisted section, and I happily watched my average speed go back up. Around mile 15, a guy passed me, and said “I’ve been about 50 yards behind you for at least 10 miles, I’ve been trying to catch up the whole time.”

Hmmm…it’d be really cruel to go and re-pass him a mile later, wouldn’t it?

So I did the only thing I could do - I pedaled just a little harder and faster, and re-passed him about a mile later. With a new goal of staying ahead of him, I had a mission on the bike. Sure, it was arbitrary, but it got me back to transition and ready to run a little faster.

Coming out of transition, my friend from the bike course ran up beside me and said “I think we can just call this I tie now.”

I pointed out that he’d started in a wave 9 minutes ahead of mine, so he’d have to out-run me by a good bit to make that happen.

Then, this picture got taken about 15 seconds later. You can see that he took my advice. 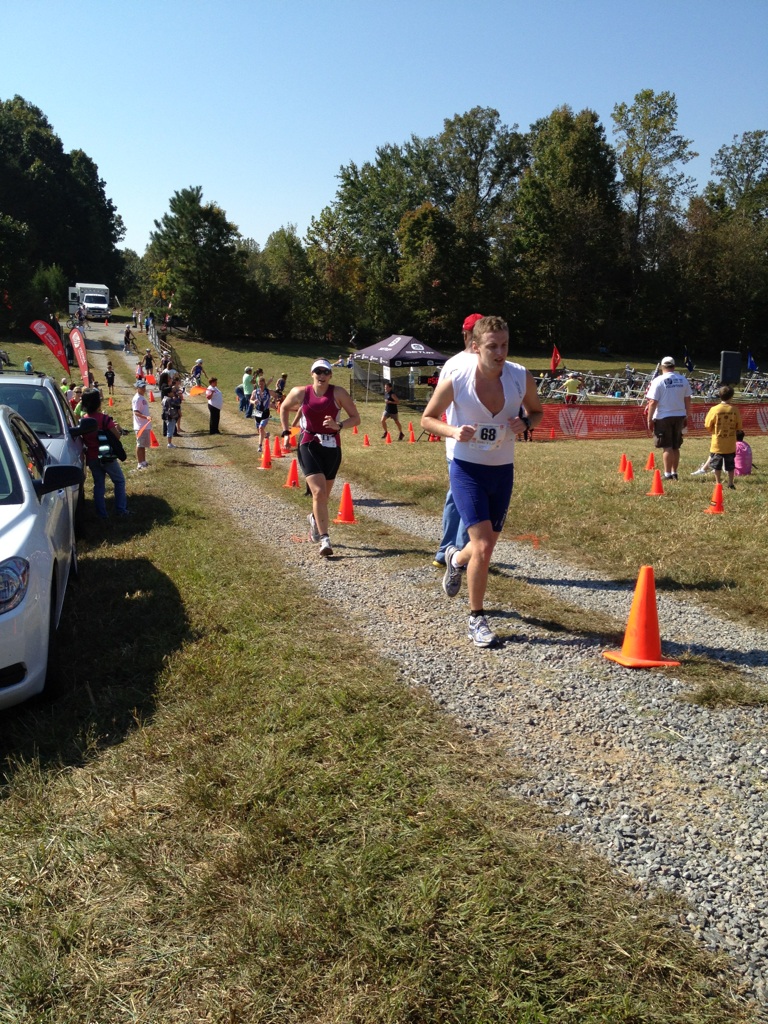 (Note: I have no intention of embarrassing this guy, it was cool to leapfrog with him on the back half of the bike course, so, if this is you, hi! I have no idea how you found my blog, but let’s race again soon.)

However, given the terrain of the course, it was quite possible that he could make up 9 minutes on me – and then some. About a third of the course was either on uneven grass or a path of large, painful-to-run-on stones. That path, of course, was on a gigantic hill that we had to run down, and then back up, twice. 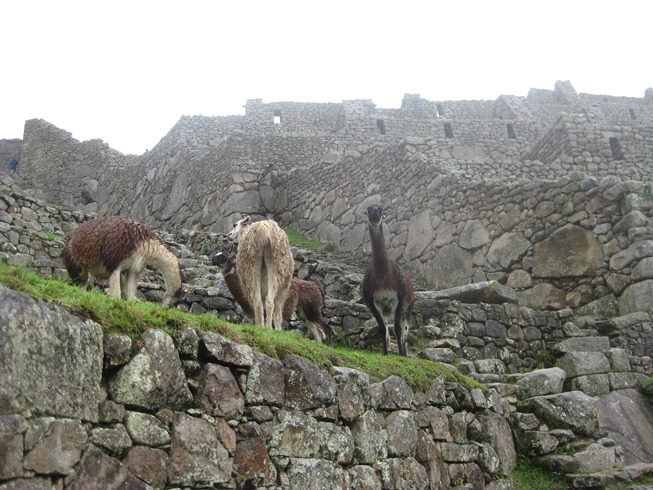 Yeah, that’s a relatively accurate picture of what it looked like from the bottom of one hill. Minus the alpacas.

This run was sluggish, which puzzled me because my running speeds have been improving the last few weeks. I started off with familiar, but awful, shin pain that occasionally creeps up on me when I run after biking. It happened in two races last year, but only on a couple of brick workouts this year, and it leaves my lower legs in agony and fatigue for a good 15 minutes. I plodded through the first mile or so, willing them to return to normal. When they finally did, I picked the pace up a bit and tried to get myself to nail that sub-hour run I’ve been looking for in an Olympic-distance race. For a while, I was close, but I never quite got there.

Even with that time goal slipping away, the overall time goal of under three hours was almost guaranteed, and I just ran as fast as I was able until I crossed the finish line.

Results were posted quickly, as they always are the well-run SetUp Events races, and it looked like I’d won the Athena division. By over 10 minutes. Now, the thing is, I know that there were other women there who were eligible to race Athena who didn’t enter, and many of them were probably faster than me. And why not? 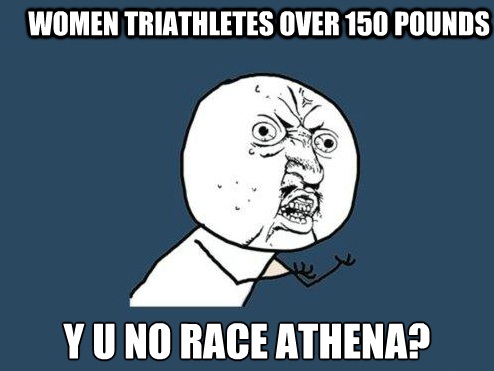 I’m not sure. I think some women are embarrassed to admit that they weigh more than 150 pounds. This is ridiculous, because we all spend the entire day in spandex – your body composition is no secret. Ladies, go for it. I’m getting kicked out of this division next season, as the weight limit is going up to 165 pounds, but I know a lot of you can still enter.

I, on the other hand, will be left to remember my final first-place finish in the division. 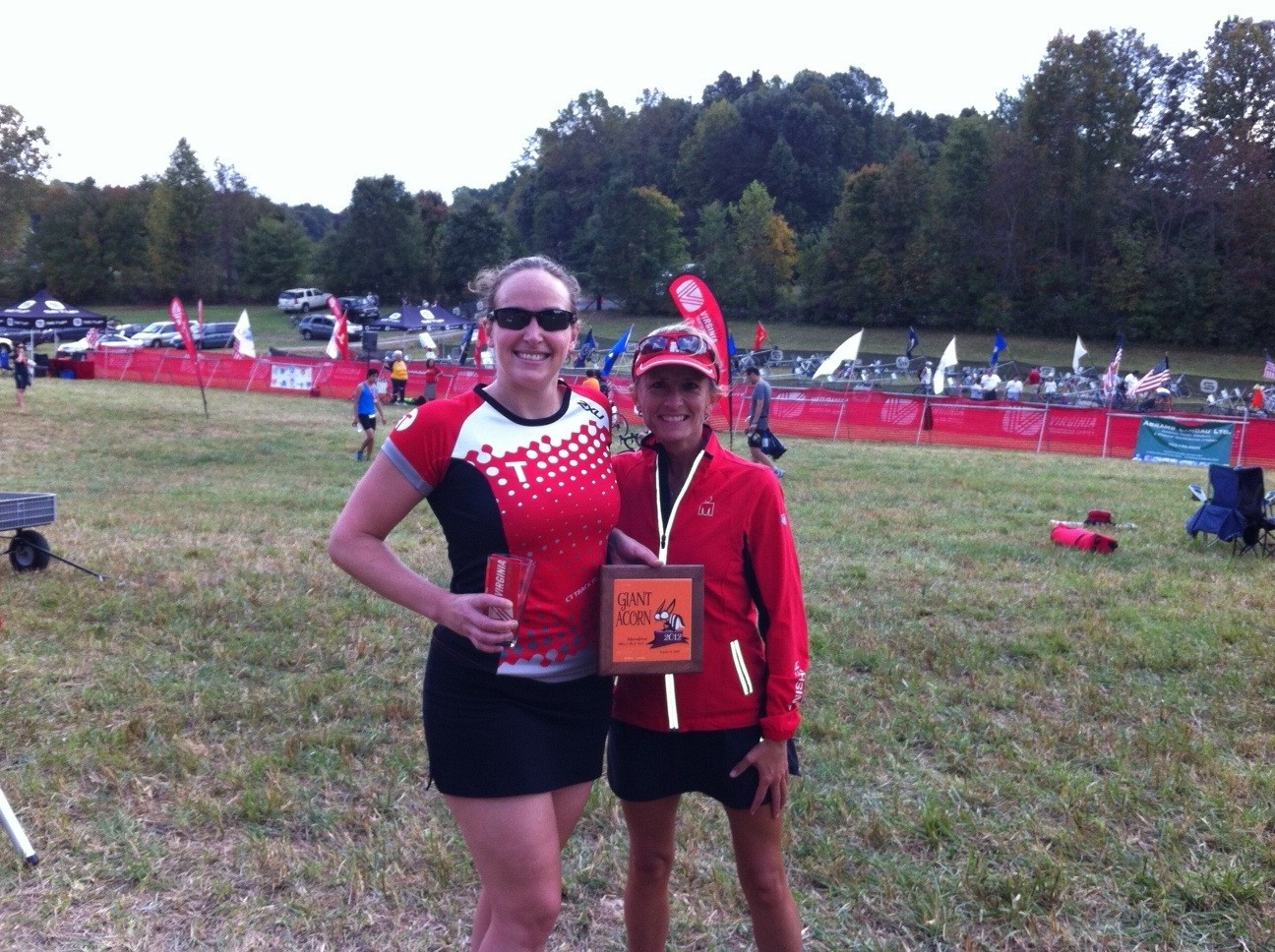 With this race, 2012 triathlon season is over for me, almost six months after my first triathlon of the season. Next year brings another ironman, and hopefully some more PRs and execution improvements as I deal with the limitations that came into play this season. With this sub-3 hour race in the books, I can focus on that all winter.