When I planned out my season with my coach, I identified a big racing gap between Eagleman and IM Louisville. Ten weeks without a scheduled race in the middle of triathlon season stuck out, and I wasn’t sure what to do with this. On one hand, it would allow me to do a lot of focused training for the IM without any race recovery time interfering. On the other hand, I didn’t want to go into a 140.6 mile race all rusty. Obviously anything long enough to require substantial rest was out of the question, and I wasn’t interested in something short that would expose my currently pathetic lactic acid tolerance.

So with that in mind, last Saturday, I raced in the Culpeper International Distance Triathlon, just a week after biking almost allof the IM Louisville Course. With that, and the sleep deprivation andcross-country business travel the week before, I expected to be sluggish at this race, but was hoping to flirt with the 3-hour mark at the finish line.

I got close – 3:05:35 - a relatively good performance given the challenging course, which I personally think was harder than the famously hilly and difficult Columbia course that I tackled back in May.

The lake was hot – 87 F – and my time might have been affected by that. This is a little slow for me, but I was happy that I was the very first person in my wave out of the water (that’s right). How did I do that without swimming super fast? First, I did a good job of sighting and staying on course, thanks to obsessively reviewing the setup of the relatively complex buoy setup before the start. And second, thanks to that obsessive review, I realized that the best way to set up for clear water and a direct line to the first turn buoy was to get as far away from the shore as the race director would let me. 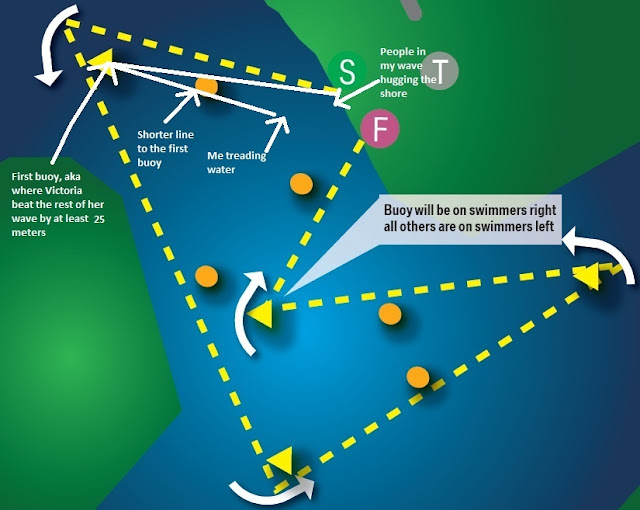 I was wondering why nobody else joined me over there, but after the race, a teammate pointed out that it was too deep to stand if you went towards the middle of the lake. Ah, right, seven years of synchronized swimming means that I don’t notice this because, really, why would you touch the bottom of any body of water you are in?

I knew going into this race that the bike course was fairly hilly, and wasn’t expecting to be hammering 19-21 mph like I would on a flat course. This course registered just over 680 feet of elevation gain – the same amount as Columbia – but the climbing was not the biggest challenge. 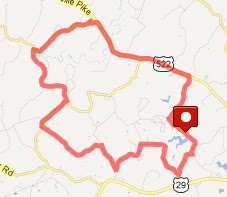 It’s a course that never STOPS turning. And if I recall correctly, every time we slowed down for a tight turn, we climbed right back up a steep hill.

For the record, it is not that easy to attack a course like that after several weekends of heavy Ironman training. I was having a really tough time just turning the pedals on some of the climbs and false flats, and figured it was lingering fatigue from IM training. Well, nothing to do but push ahead as best possible, and avoid getting too discouraged by the slow speed.

As for the tough time I had pedaling? It turns out that the spring for the skewer for my front wheel had coiled itself into the fork end, which was kind of like having the brakes rubbing the wheel the whole time. Brilliant.

After trashing my legs on the hilly, technical bike course, but before running, I had to find my gear in transition. Some guy racked his bike so that his back wheel was on top of my area, and I had to hunt for my left running shoe. Nice.

And then, I got to the part that really makes this course tough: the super-hilly run course. Again, let us take Columbia, with its famously unforgiving run course, as comparison.

Yes, that’s a rated climb at the start of the run. Not cool, people, not cool. But, it’s the same difficult run course for everybody, so I started off at something like 11:30/mile pace and dealt with all those hills while slowly building into a more respectable 10/mile pace towards the end. I power walked up a couple of hills, passing “runners” in the process, which was amusing, and also slowed to a walk for 5-10 seconds shortly after mile 5 when I started to feel dizzy thanks to the heat. Nope, not going to get pulled from the course with a mile to go, thank you very much. Gathered myself together for the remaining mile and ran it in to finish first in the Athena division. 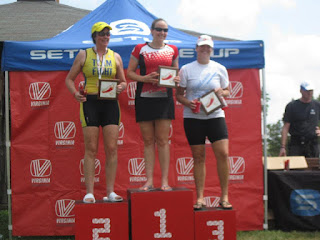 Also, after that, I had the super-exciting experience of meeting Alyssa, who had just rocked her first Olympic-distance tri.

So it was an OK day. I won the division, conquered a course that is objectively more difficult than Columbia’s, managed a dizzy spell without a visit to the medical tent, and left feeling ready to finally rest up for IM Louisville.