Fifty three weeks ago, I bought the first bike that I’d owned in years. It was the first real road bike I’d ever been on in my life, and less than 48 hours after getting it, some crazy person took me out on a 40 mile ride.

Something about baptism and fire comes to mind here.

About a month later, that same crazy person took me on a 50 mile group ride. THIS TIME, there were hills. 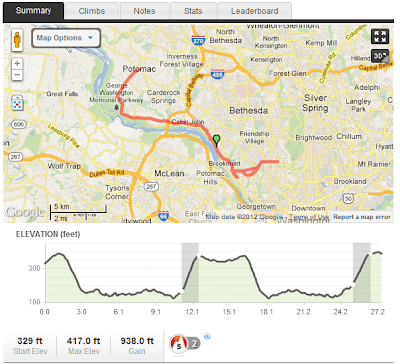 That was sad. Really sad. And motivating, because it hammered home just how much work I had to do to become a passable cyclist.

For four hours on that piece of road out near Front Royal, VA, I got to learn. Many things.

First, every so often I get a little too confident in my biking fitness. Hey, look at me, I almost broke 3 hours for a half ironman bike split! I can haul 19 mph on Hains Point for well over an hour without much effort!

Looks like I have more work to do before reaching “awesome” status. Or even “OK” status. 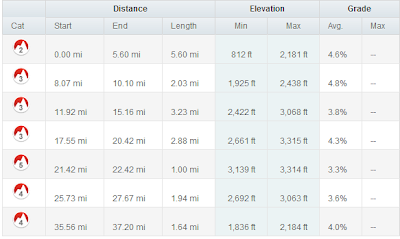 When you go up and up and up for ages, there’s no break. In fact, I was scared to stop at all because I was pretty sure I’d never get going uphill again.

One more takeaway: a compact crank is not optional for climbs like that. Thankfully, mine was installed the day before the ride. And it’s staying on through IM Louisville without question, because even though we gained almost as much elevation in 5.5 miles as I will in 112 miles in Louisville, hills can suck the life out of your legs if you can’t keep your cadence up.

And finally, another lesson: Don’t give up. I was positive that with my average speed of 8 mph halfway through, I should abandon all plans for even attempting IM Louisville since I’d never make the bike cutoff. But then I sped up on the way back when we weren’t climbing anymore (did somebody say something about gravity?), and I checked out the elevation gain for the ride and reasoned that I'll be much faster on a course that doesn’t involve starting out with a gigantic 5+ mile climb.