For most endurance races, there’s an important workout that gives you an idea of how prepared you are for the upcoming race. The 20-22 mile run 3 weeks out from a marathon. A longertempo run a couple of weeks out from a 10 miler. For a 100 mile ultra…actually I have no idea what that key workout would be because you people are all crazy.

In any case, these workouts serve two major purposes: to give you confidence in your ability to race towards your goal time, and to evaluate your readiness, specifically exposing any remaining weaknesses in your pacing, hydration, or race-day plan. If all goes well, you finish up exhilarated and excited for your upcoming race. Notice: Sarah and I after Sunday’s 54.5 mile bike and 1 hour run. 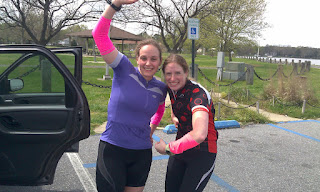 Since that was basically a half ironman – minus the 1.2 mile swim, which is a non-event for a compulsive swimmer like me, and about 7 miles of run/walking – being able to finish it with energy to spare for a post-workout photo op was encouraging for my prospects at the TryCharleston Half on April 21.
But confidence building was only one of the points. The other was the evaluate readiness for the race. Find out what worked and what didn’t. And in the interest of actually retaining that information and following up in the time between now and race day, it seemed important to write it all out.
GOOD IDEAS
-Drinking water/Nuun on schedule. 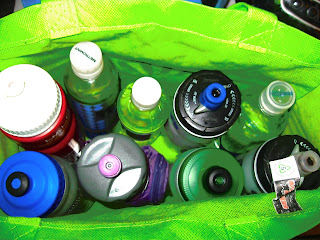 No, I didn’t drink all of that myself, but I was getting in 20 ounces of Nuun every hour on the bike and also downed about 12 more ounces during the one hour run. This was per the race plan, and left me well hydrated and didn’t result in any sloshing.
-Getting out of the aerobars and stretching for the last 3-4 miles of the bike to prep for the run. My hips were getting tight after 50+ miles hunched over on the bike, and it was worth the 2-3 minutes we sacrificed on the bike to have relatively fresh legs for the run.
-Eating energy balls every half hour for the first two hours on the bike and gu chomps every half hour for the remainder of the bike. There’s a chance I could eat my date-based energy balls the entire way, but I don’t want to start running and find out that they don’t sit as well as I thought. There's also a chance that I could eat nothing but gu chomps for a 6+ hour race without going insane, but it's unlikely. The balance was good and allowed me to finish the entire workout with minimal hunger but no GI issues, so the combination was enough but not too much. I also found that 30 minutes was a good frequency that didn’t leave me overloaded at any given time, and didn’t have me constantly chomping away.


-Settle in on those aerobars during flat sections and FLY. Or, for the Eagleman and TryCharleston courses, stay on them almost the entire time since there are no hills. This means spending a lot of training time in them, which I've been doing. Now to keep it up so that I can hang out around 18-20 mph on flat courses.


-Getting outside on the tri bike as often as possible to get used to handling it. One of the reasons we were able to bike at an 18 mph average was that we weren't scared of our bikes (anymore). No more white knuckling on the brakes for us.


-The 6 minute run-1 minute walk strategy makes it feel like I can go forever. This is big after 56 miles of biking. My legs will not be fresh. The thought of running 2-2.5 hours will be impossible. But 6 minutes? Sure thing. As a bonus, I still hold around 10 minutes/mile with the walking intervals, which isn't a whole lot slower than my normal long run pace.

-The mechanics of eating while moving (fast) on my tri bike are more difficult than I realized. I was fine with eating on my road bike, but the tri bike isn't as stable, so I slowed down quite a bit to eat, and as a result, only got in 150 calories an hour instead of the planned 200. I'll try starting with open packages, and just plain practicing for the next couple of weeks.


-My shins did not like running after biking. I've been focusing so much on strength and flexibility in my hips that I've neglected my lower legs, which are tight and weak. I have two weeks to whip them into shape with stretching and ICE. 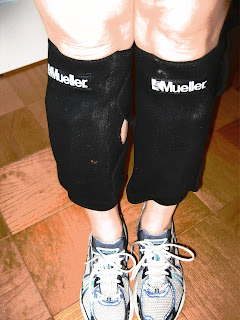 -Have extra food to take in right before the start, because 70.3 miles is a long way to go when you start hungry. I took  in my planned race day breakfast, and then drove almost 2 hours instead of starting the workout right away, which is my normal schedule. After the drive, I wound up hungry right before we started and luckily had access to some spare energy balls. I'll have those on hand while we wait for the swim to start to ward off early hunger.


-Get those heels down during my pedal strokes. My coach noticed that I need some work on this, and when I thought about this, I sped up almost instantly. I can't focus on this on race day, but I can make this more natural by thinking about it during my bike workouts in the next two weeks. More speed with less effort on the bike means a faster bike split AND a faster run split. Sign me up, please.


-My new saddle is great, but I need my seat lowered a little. This is the kind of thing that becomes very obvious over 50+ miles. My knees extend too much at the bottom of my pedal stroke. No big deal, but I need to have time to adjust to the new position before the race.


-I'm ready to cover the distance of race in a controlled and smart manner (except that I need new tri shorts; please don't yell at me about cutting it this close).
-There's a lot that went right on Sunday, especially from a nutrition and hydration standpoint.
-I have two more weeks to tweak stuff. On it. Starting with a seat adjustment tomorrow.
Posted by Victoria at 10:27 AM