I just finished up yet another load of workout-clothing laundry, thanks to the fact that everything was muddy and soaking wet. It didn’t actually rain that much this week – until the weekend, of course, which is when all the longer outdoor workouts get scheduled. Even with the lack of mid-week rain, I still somehow managed to get drenched while running during the one 45 minute downpour of the week. After that, of course, Saturday brought two rainy bike rides and a rainy run.
Aside from the extra laundry, I don’t really mind that much, particularly when the rain  is just a light drizzle. If the temperature is 50-60 F, it can be nice and refreshing.
Or maybe I’m just crazy. You read about the week and decide for yourself.
Monday: Rest day. Really.
Tuesday: A one hour progressive tempo run starting at 5:45 am. A severe thunderstorm with  massive downpours starting at 6:10 am. Cut down by a whopping 5 minutes when I ran back home as quickly as possible. Soaking wet running clothes. Enough water? Nah. Try 3500 meters of swimming with DCRP Masters at night.
Wednesday: A one-hour gym session in the morning: elliptical warm up, weights, and stretching.
Thursday: 1:15 of intervals and powerups on the bike trainer in the morning.
Friday: I had the day off work, but had a light workout day, so I loaded up the car with my bikes to take them to their respective shops. 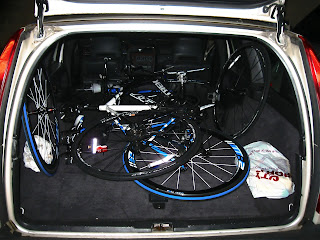 See how easy that was to get them both in there? Never make fun of my 17 year old station wagon again.
In between bike shop visits, I got in a 3600 yard swim with some reasonably fast times (under 1:20/100 yards). I also hit the gym for more weight work after I finished dealing with my bikes.
Saturday: A 40 mile bike, partially with coach and a bunch of her athletes, but mostly just a handful of us who were stupid hardcore enough to pedal away through the rain – at just under 17 mph, which is a pretty quick pace for me for that distance. 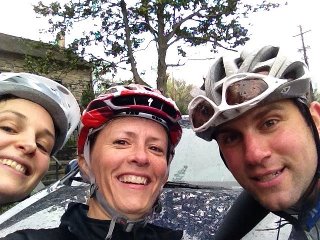 And since already wet, why not go out in the rain for a 20 minute brick run? GOOD IDEA.
Even better idea? Not telling the boyfriend that you wouldn’t mind skipping the pre-planned bike ride up to see the Kenwood cherry blossoms given the weather, and instead leaving the decision up to him.
18 miles and a lot of wet road debris later, he regretted his decision. 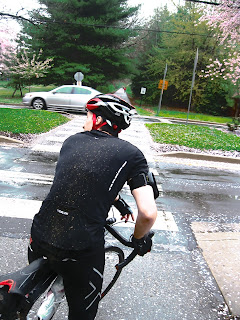 But the cherry blossoms were pretty. 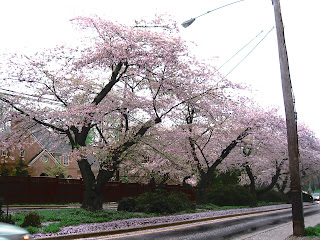 Sunday: A 7 mile run on somewhat tired legs (58 miles of biking and a little over two miles of running the day before? Pshhh nothing.). It turned out to be faster than I thought it would be (9:38 pace) given the previous day. An easy 2200 yard swim workout, followed by a 3 mile bike ride home from the auto repair shop – since it was the easiest way to deal with getting it there by 8 am today.
Worst part of the week: Running through the river formerly known as Fessenden St. while trying to escape a lightning storm. My clothes didn’t dry out until Thursday night.
Best part of the week: I can run – faster than 10 minute miles, even -  after biking a lot. Fact.
Posted by Victoria at 10:48 AM