Even though most of my racing these days is run-focused since triathlon season north of, oh, Puerto Rico, doesn’t start until late April, I really only became runner in the past year or so. Sure, I liked to run for cross-training, for fun, and as a productive way to enjoy nice weather, but it was over ten years of that before I entered any races.

Instead, I was a swimmer. I love swimming. I always have. I swam in college. Often twice a day. I swam after college – still almost every day. I think that between the ages of 14 and 30, my hair was wet more often than it was dry. I always smell like chlorine. Always. If I could marry a pool, I would (hello Rick Santorum! How are you today?). But I can’t, so I’ll settle for making friends with people who will do ridiculous swim workouts and open water races with me. 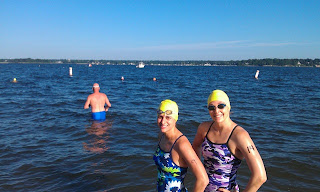 (By “friends,” I mean Beth, not that guy in the background showing ass-crack)

However, I started moving away from swimming many races when I was frustrated by the fact that I wasn’t swimming as fast as I used to. This isn’t surprising, given that I was no longer logging 15,000 yard days in the pool or pushing myself through all-out sprint sets on a regular basis. It was still annoying. So, enter running.

Then, after dealing with minor shin splints and IT band irritation, enter properly-fitted running shoes. 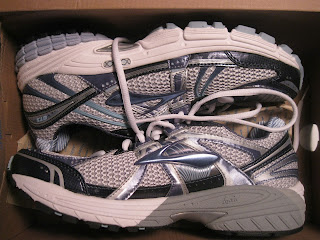 For my first few running races, and triathlons, I self-trained based on suggestions I found on the internet. Because, as we all know, everything you read on the internet is well-researched and based on high quality information.  These plans noted day-by-day mileage-based workouts for the weeks leading up to a race, but included no other information about the execution of these runs.

Which my brain took to mean “Run x miles as fast as you can without stopping unless absolutely necessary to avoid cars.”

Turns out, this isn’t smart. But why? I mean, obviously any time I was given a distance to swim at a practice, I went all out, and we never took and breaks. Every practice had the same purpose – swim as fast as possible for a given distance and then go home!

Except…not at all. Some days, we did longer continuous swims to build aerobic base. Some days, we did lactate threshold sets where we spent almost as much time resting at the wall as we did swimming. Other days were recovery days, where we swam quite slowly to clear lactic acid out of our muscles, and still other days were workouts with very fast, short sets with a lot of rest to help us with turnover and to allow us to push hard while maintaining our form.

And, because I am not that smart, I never thought to apply such training principles to my running. Instead, for long runs, I went as fast as I could for the prescribed distance, even though it makes no sense to do an all-out, nonstop 10 mile training run when you are preparing yourself to cover 26.2 miles. As a result of all this mono-pace distance, my joints and muscles were starting to rebel, and I finally sought much-needed assistance from the PR Distance Training Program.

Where I was instructed to do slower long runs (kind of like a continuous 1000 at a pace far slower than my mile race pace), faster 800m-2000m runs with 2-3 minutes rest (hmmm…lactate threshold sets, anybody?), and some recovery workouts (sigh…I should know better).

And then, the nagging aches and pains went away, I set seven PRs in three months, and found out that I can actually run much better when I train exactly the way I did when I was in my best swimming shape.