One of the biggest changes that I made when I started working with a coach was the incorporation of rest days into my schedule on a regular basis. And apparently, when my coach says “rest day,” that does not mean “just go swim an easy 3000 meters” or “run but keep it short and easy.” It ACTUALLY means rest. I still complain about this sometimes, but as I’ve moved towards more focused, intense workouts in favor of sheer volume, I find that I’m usually ready for a little bit of rest by the time my weekly rest day arrives – normally on Monday.

However, sometimes, my weekly rest day floats around, based on my work/travel schedule, and the timing of key workouts. I might wind up going, say, nine days, without a rest day.
For example, on Tuesday, I found myself having gone 11 days without a rest day. And I was half dead. It started two Fridays ago, when I had a 2.5 hour block of swimming, running, and lifting that left me a little tired. The next day, I swam. Very slowly. My muscles were rebelling. Sunday was a tough 10 mile run through brutally cold and windy conditions that my body did not appreciate. But oh, Monday, the rest day, it was coming.
Or not. Because of my work travel schedule, I was scheduled for a rest day on Wednesday instead – totally logical but not a welcome fact on Sunday night.
Well. Here we go, then.
Monday: One hour steady spinning on the bike trainer, grimacing about the fact that my legs felt like they were filled with lead the whole time, followed by half an hour of core and upper body lifting at the gym. Painful but necessary dry needling on the glutes (ouch) and hamstrings (!#$^*!*#$) in the evening.
Tuesday: 3600 meters of swimming in the morning that involved fatigued muscles, arms that just wouldn’t turn over, a tight lower back, hamstring twitches, and missing most of my goal times. Followed by five minutes of sitting in the hot tub and contemplating how much I hated my life at the moment before getting out and driving to BWI so that I could fly to San Antonio for work.
Wednesday: The much anticipated rest day. This might be the first time since starting this job that I’ve stayed at a hotel with a fitness center and not gone inside. Instead, I got to talk about maintenance at nuclear power plants with these guys. 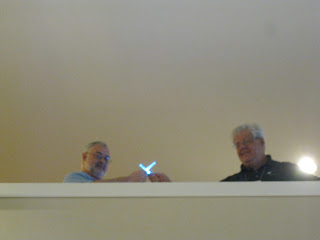 Jealous of my job? You’d better be.
Thursday: Having gotten home at a somewhat reasonable hour on Wednesday night, I woke up early to do a fake track workout of 4x2000 meters on the treadmill. Wound up hitting almost 7 miles in a little over an hour because MY LEGS FELT AWESOME. Funny how that rest thing works.
Friday: Easy 70 minute gym session with elliptical, weights, stretching, and foam rolling all thrown in before work, which was a good call because I wound up staying late. Yes, on the Friday before a 3-day weekend. No, I’m not over it yet.
Saturday: Three part workout, starting with an early morning 12 mile run with Mia, where we held a fun 9:28 pace until she split off after mile 10. I had about an hour inside before part two, which gave me enough time to whine to my boyfriend about how much my legs hurt stretch/foam roll and eat M&Ms get in a decent second breakfast of yogurt, fruit, and almonds. Then, it was time for a 90 minute bike along Beach Drive, intended to help me get over my intense fear of my new bike. It kind of worked, and by the end, I was taking some of the sharper downhill curves on my aerobars without slowing down. I’ll get there. Really, I will.
So 3.5 hours of training later, and I’m surely done, right?
Of course not. I had already signed up for the Sweetheart Aquatic Triathlon at Washington & Lee High School in Arlington that afternoon. I teamed up with one of the assistant coaches for the team I coach, and we pulled out third place with our mad kayaking skills. 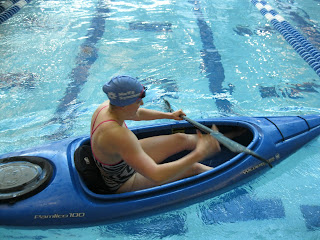 A “race” report will be coming on Thursday, complete with a blow-by-blow of Jon taking pictures of my ass and my coach cheering for me to go faster while I was aquajogging.
Sunday: More rest! This was also by necessity, since I spent almost 13 hour straight coaching our team to a few medals. 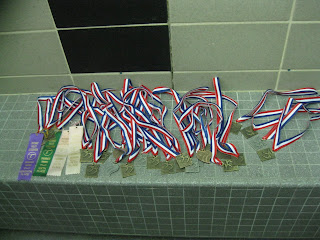